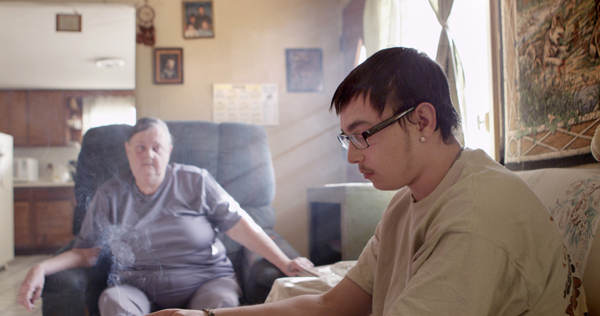 This look at growing up poor in Middle America would make for an excellent double bill with this year’s (admittedly more successful) The Overnighters, but Andrew Droz Palermo and Tracy Droz Tragos’ Sundance Grand Jury Prize winner offers up a poignant and often bittersweet look at three underprivileged at risk teenage boys.

Andrew has a good head on his shoulders, even though his mother is suffering from health problems and his father is a ludicrously untalented Hank Williams’ cover artist with few tangible aspirations that force them to move every few months. Appachey is a petulant brat who has driven his siblings and ineffective single mother to the end of her rope. Harley is almost as much of a trouble maker, but his mother is in prison and a lot of his darkness stems from a horrible secret that he has kept bottled up inside for a very long time.

Palermo and Tragos have mounted a gorgeous looking film about low income squalor in a dead end town, and it’s easy to see how they selected Andrew and Harley as subjects considering how their family histories have shaped their current personalities. Neither wants to be like their parents, but one is vastly more forgiving than the other. They make an interesting dichotomy. Appachey, however, is kind of a dull boor to follow around, which sounds harsh to say about a teenager, but he’s almost uncomfortably out of place and seemingly irredeemable when placed into comparison to the other two. If he’s the “control” of this cinematic case study, it doesn’t necessarily work. Still, Andrew and Harley make it worth a watch on their own.

I’d also like to add that very recently Harley, one of the film’s subjects, has been diagnosed with a brain tumor in need of an operation that his family can’t afford on their own. The filmmakers have launched a fundraising campaign to help out with the astoundingly expensive medical bills. You can check that out here and donate if you feel you can afford it. It really is a great cause. Watch the film and you’ll see why.