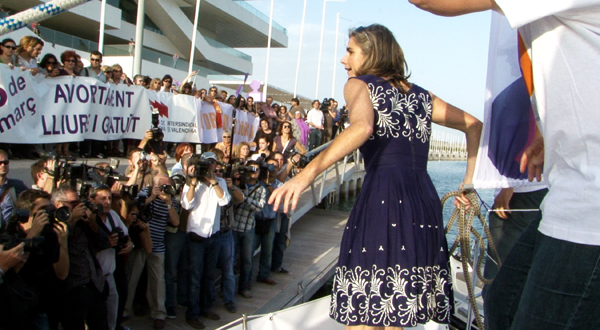 This powerful story of Dutch doctor and women’s rights activist Rebecca Gomperts and her Women on Waves campaign would make for a great documentary just by examining what they do every year, but in the hand of Diana Whitten – who devoted a whopping seven years of her life to making and shooting this film – it’s something incredibly special.

Gomperts and her team sail around the world to impoverished and backwards thinking countries to perform sometimes much needed abortions to women struggling and in desperate need of help on international waters where they aren’t bound by restrictions or laws. Naturally living such a nomadic lifestyle in such a weighty profession takes its toll on Gomperts and her dedicated crew, with protestors often greeting them and dangerous close calls and massive setbacks a sad reality of the job.

Whitten doesn’t merely stop her thesis at showing the hard work and dedication that Gomperts puts in or merely say that she’s providing a much needed and controversial service, but she makes the story more of a humanist tale than an advocacy doc. While Gomperts’ job is in some respects getting easier, it’s a real testament to her tenacity (and Whitten’s) that she has lasted as long as she has.