It doesn’t feel like spring in Toronto until Hot Docs Canadian International Documentary Festival (Hot Docs) rolls through town. And with spring just a heartbeat away, it’s only fitting that Hot Docs released their 2019 lineup this morning.

Now in its 26th year, Hot Docs 2019 will run from April 25–May 5 and present 234 films and 18 interdisciplinary projects from 56 countries in 15 programs. Hot Docs programmers narrowed the field down from a pool of 2951 submissions, and 54% of the filmmakers in this year’s festival program are women.

Hot Docs 2019 will screen documentaries in the following programs: 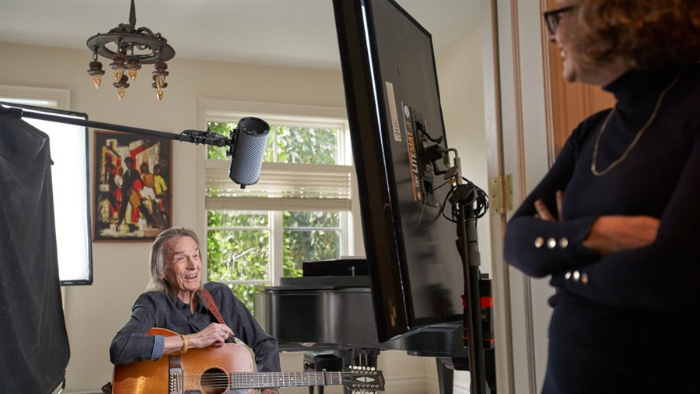 DOCX PROGRAM
This year’s DocX program, an interdisciplinary section of the Festival celebrating documentary work that lives outside of the traditional format, will feature virtual reality and interactive experiences, including: the world premiere live performance of Supreme Law, a satirical re-telling of the origins of Canada’s Constitution with comedian Jus Reign; an exhibition of digital artworks immersed into the bookshelves and media hardware at the Goethe Media Space; and the international premiere screening of the provocative film The Infiltrators, a hybrid of doc footage and actors portraying undocumented immigrants seized and held in detention by ICE. Free DocX programming will be available at Autodesk Technology Centre, Toronto, and will include VR exhibits from the popular Anthropocene project, as well as have a frank and funny conversation about self-examination with actor Chris O’Dowd in The Evolution of Testicles; immerse you in the long history of restriction of movement for Black Americans in the pivotal Traveling While Black, and more.

SPECIAL PERSENTATIONS
In addition to Willie, The Rest, Human Nature, Toxic Beauty and Gordon Lightfoot: If You Could Read My Mind, the Special Presentations program will screen the international premiere of American Factory, a new film by this year’s Outstanding Achievement Award recipient Julia Reichert, with co-director Steven Bognar, about an abandoned General Motors factory in Ohio that’s reopened by a Chinese billionaire. The program will also screen the world premieres of Killing Patient Zero, which looks at the devasting impact of the 1980s AIDS epidemic and clears the name of the Québécois flight attendant known as “patient zero”, and Our Godfather, about the family of a high-ranking Sicilian mob boss that came out of hiding to reveal how he helped convict over 400 Mafioso; the international premiere of Knock Down the House, which follows four progressive female politicians, including Alexandria Ocasio-Cortez, as they campaign for Congress during the 2018 US midterms; and a tribute to the life and career of Michael Hutchence, lead singer of rock band INXS who died 1997, in Mystify: Michael Hutchence.

CANADIAN SPECTRUM
In the competitive Canadian Spectrum program, notable films receiving their world premieres include the Festival’s opening night film, nîpawistamâsowin: We Will Stand Up, which looks at inequity and racism in the Canadian legal system after the killer of Colten Boushie, a young Cree man in Saskatchewan, is acquitted; Prey, in which a sexual abuse survivor pursues justice in a case against the Catholic Church; Our Dance of Revolution, an overdue look at Toronto’s Black LGBTQ community that presents an oral history of local legends and freedom fighters; and The World or Nothing, where twin brothers migrate from Cuba to Spain in pursuit of internet stardom, among others.

INTERNATIONAL SPECTRUM
In the competitive International Spectrum program, notable films receiving their world premieres include: Buddha in Africa, about a Malawian boy raised in a Chinese Buddhist orphanage  who’s torn between his heritage and upbringing; Hope Frozen, which profiles a grief-stricken Bangkok family and their unorthodox decision to cryopreserve their deceased daughter; The Guardian of Memory, a film that reveals the desperate stories of Mexicans fleeing the violence of their country toward an unfriendly US border; and Marek Edelman… and There Was Love in the Ghetto, an artful recreation of the Holocaust memoir of the leader of the Warsaw Ghetto Uprising.

WORLD SHOWCASE
In the World Showcase program, notable films include: the world premiere of Dear Brother, about a man who tries to keep his comatose brother alive through a one-sided dialogue of music, videos and touch; Midnight Traveler, which captures an Afghan filmmaker’s quest to seek asylum for his family after the Taliban puts a bounty on his head; the world premiere of Massacre River, which details how thousands of Dominicans of Haitian descent were left stateless after their citizenship is ruled invalid; the world premiere of When We Walk, in which the filmmaker is confronted with the inequity of the US Medicaid system as he battles multiple sclerosis; Inside Lehman Brothers, a detailed account of the 2008 subprime mortgage crisis, highlighting the female mortgage brokers and accountants whose whistleblowing fell on deaf ears; and the international premiere of Last Breath, about a rescue mission to save a diver stranded 100 metres underwater with only five minutes of oxygen.

MADE IN ITALY
The Made In Italy program includes: Disappearance of My Mother, in which the son of one-time Italian fashion model Benedetta Barzini films the cover-girl-turned-feminist-academic, forcing a confrontation between privacy and self; the world premiere of Dicktatorship, in which a group of filmmakers challenge misogyny, chauvinism and sexism in a country famous for its mix of dictators and Latin lovers; ISIS, Tomorrow. The Lost Souls of Mosul, where renowned journalists return to Mosul in search of the children who were born during the three years of ISIS occupation; and Butterfly, about a teenager from the roughest street in Naples who rises to become Italy’s first female Olympic boxer.

ARTSCAPES
The Artscapes program, which showcases creative minds, artistic pursuits and inventive filmmaking, includes: Pipe Dreams, which follows five young musicians who face off in Montreal’s prestigious Canadian International Organ Competition; the world premiere of There Are No Fakes, where a celebrity art buyer gets drawn into the web of an exploitative art forgery ring; the international premiere of Moonlight Sonata: Deafness in Three Movements, a moving memoir of the life of the filmmaker’s deaf son and her deaf father in his twilight years; the international premiere of Beauty and Decay introduces audiences to a stone-faced club bouncer who’s also a gifted photographer that captured East Berlin’s 1980s punk scene; the international premiere of Our Time Machine, about a son who seizes the chance to connect with his father before he succumbs to Alzheimer’s disease; and Symphony of the Ursus Factory, the story of a derelict Polish factory that’s resurrected by former workers who participate in a choreographed experimental reenactment that culminates in an elegant tractor ballet.

NIGHTVISION
The Nightvision program, which features future cult classics, includes: the international premiere of Trixie Mattel: Moving Parts, which takes viewers behind-the-scenes of half-Ojibwa drag queen Trixie Mattel’s one-woman show; the world premiere of The El Duce Tapes, about notorious frontman of shock-rock band The Mentors who gained infamy in the ‘80s and ‘90s for his hateful behavior; the international premiere of Hunting for Hedonia, which follows the historic controversy and renewed enthusiasm over the medical practice of deep brain stimulation; and Memory – The Origins of Alien, which talks to the artists who created Ridley Scott’s iconic sci-fi masterpiece, Alien, celebrating its 40th anniversary this year.

PERSISTER
The Persister program, which features female-directed films about women speaking up and being heard, includes the world premieres Maxima, about a fearless Indigenous woman in Peru who refuses to cower to a multi-billion-dollar mining corporation, Because We Are Girls, the story of Indo-Canadian sisters from small-town British Columbia who, haunted by a childhood secret, finally face their abuser in court, and Haydee and the Flying Fish, where a Chilean woman who was tortured under Pinochet’s regime forty years ago awaits a potentially historic court verdict; as well as the international premiere of A Woman’s Work: The NFL’s Cheerleader Problem, in which former cheerleaders alleging sexism and labour violations face off with the NFL corporation.

ANIMAL MAGNETISM
The Animal Magnetism program, which explores the complicated relationship between humans and animals, includes the international premieres of Kifaru, a devastating account of extinction that tracks the final years of the world’s last male northern white rhino, and Garden, Zoological, in which a small South Korean zoo shows how cramped enclosures and human intervention cause animals to lose their wild instincts; as well as Sea of Shadows, which follows activists as they fight Mexican cartels, Chinese mafia and reckless poachers pushing the world’s most elusive whale into extinction; and Honeyland, a triple Sundance award-winner that profiles Europe’s last female bee-hunter.

MAKING BELIEVE
The Making Believe program, which examines the multiple ways in which the truth can be deceiving, includes the world premieres of Propaganda: The Art of Selling Lies, a cautionary tale in which influential artists discuss the power of persuasion, from early cave drawings to presidential tweets, and The Pickup Game, a provocative investigation that exposes the secrets of the scandal-filled pickup industry; as well as The Hypnotist, which tells the story of a famous hypnotist in Cold War-era Finland, whose involvement in covert ops and high-level politics lands him in hot water; and Daddy and the Warlord, about a journalist who travels to postwar Liberia to uncover her father’s ties with infamous war criminal, Charles Taylor.

THE CHANGING FACE OF EUROPE
The Changing Face of Europe program includes the international premieres of To Share or Not to Share, about a squash coach who abandons his successful career in London to launch a barter-based community in Estonia, and The Reformist – A Female Imam, in which a strong-willed Muslim woman opens one of Europe’s first mosques run by female imams in Denmark; as well as Easy Lessons, the story of a Somali child bride who flees to Hungary to build a new life; Scheme Birds, in which a scrappy soon-to-be mother struggles to find peace and a future in a Scottish steel town riddled with gang violence; and #Female Pleasure, a rousing feminist film in which five women from around the world risk their lives to question the patriarchal barriers oppressing female sexual pleasure.

REDUX
This year’s Redux program, a retrospective showcase of documentaries that deserve another outing on the big screen is presented in partnership with the National Film Board of Canada. In recognition of the NFB’s 80th anniversary, Redux will celebrate the work of its female filmmakers, including two shorts programs: Oscar-Winning-shorts, which includes three Academy Award-winning films that were produced out of Studio D in the 1970s, the world’s first all-woman production unit under the NFB; and Five Feminist Minutes which, inspired by a series of shorts produced out of Studio D in 1990, will screen four new films from contemporary directors who pick up the thread where these trailblazing filmmakers left off.

FOCUS ON
The Festival’s Focus On program will spotlight the work of Canadian filmmaker Julia Ivanova, including retrospective titles as well as the world premiere of My Dads, My Moms and Me, a new film by the director. Hot Docs will also present the Outstanding Achievement Award Retrospective, which will honour the timeless work of American documentary filmmaker Julia Reichert.

Hot Docs (www.hotdocs.ca), North America’s largest documentary festival, conference and market, will present its 26th annual edition from April 25-May 5, 2019. An outstanding selection of approximately 200 documentaries from Canada and around the world will be presented to Toronto audiences and international delegates. Hot Docs will also mount a full roster of conference sessions and market events and services for documentary practitioners, including the renowned Hot Docs Forum, Hot Docs Deal Maker and the Doc Shop. Hot Docs owns the Hot Docs Ted Rogers Cinema, a century-old landmark located in Toronto’s Annex neighbourhood.