Drums underscore the action of the season four finale of House of Cards, conjuring an image of the distant approach of some foreboding army. Terror rains down from all directions, no longer synonymous with the threat of ICO and extremists, the loaded term, “terrorism” is now fully entrenched in the minds and actions of the Underwood Team. 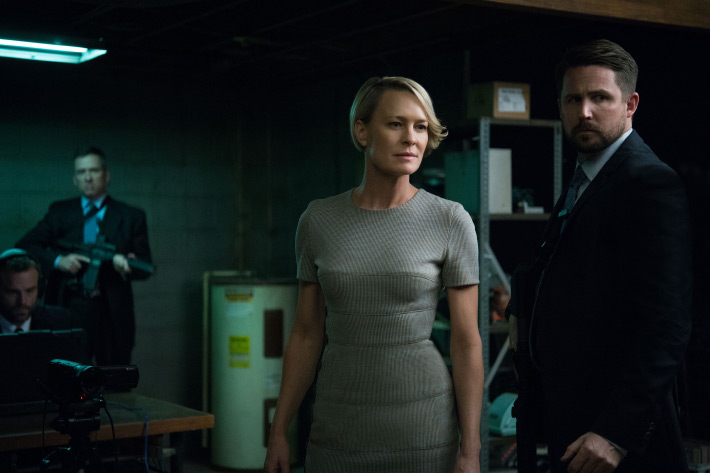 The Millers are still being held captive and when negotiations with Conway prove unfruitful and Frank takes matters into his own hands, bargaining the release of the female members. Remember when your mom would ask you to do something on the count of three? Frank borrows this tactic from the parents of the world, giving the ICO counterparts exactly ten seconds to release the two hostages in exchange for a call with their leader, Yusuf Al Ahmadi.

Yusuf’s been moved from the notoriously cushy Guantanamo Bay to a safe house in Virginia where he’s watched in the shower, and it’s Claire’s job to try and convince the leader to, you know, change his mind in terms of everything he believes about wanting to make America feel the same hurt as he and his people have felt. He claims to be insulted by the fact they’ve sent a woman to talk to him, and Claire calls bullshit. He’s not an Islamic Extremist from Syria, he’s an intellectual Iraqi, who uses religion to manipulate and motivate the masses, “Like how you use democracy and freedom,” Ahmadi retorts. OH SNAP.

Laying Down The Law 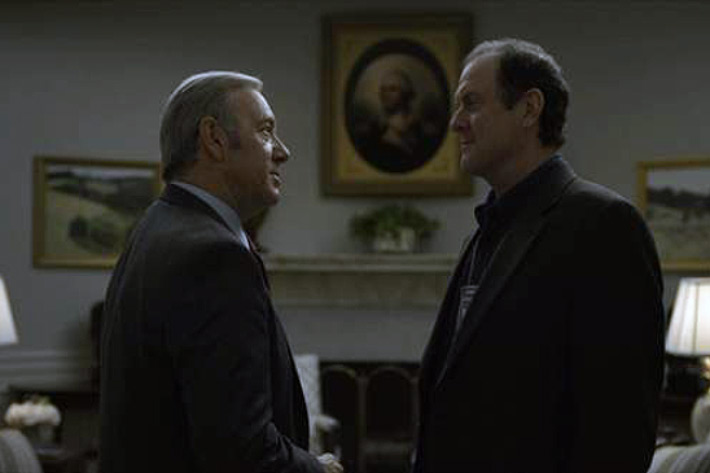 With backing from The Washington Herald, Tom Hammerschmidt’s story about Frank Underwood’s crooked path to the White House is about the be unleashed. Upon hearing about the impending article, Frank hits Seth over the nose with his newspaper like a dog that made on the carpet, “HOW DID THIS HAPPEN?” he screams a full octave higher than his usual growling drawl.

We know how this happened, and the Hammer of Schmidt is about to come down like a tonne of bricks on the POTUS. Tom and Frank’s head-a-tete in the White House where Frank pulls out all the stops to try to convince Tom to stop the story. He points to his gut where he was shot by Lucas to prove a point about facts vs. quotes.

“He was right about your soul… You destroy whatever is in your path.” — Tom “Imma Break This Shit Wide Open” Hammerschmidt

Tom is not dissuaded by the President’s attempt at crushing the story. Corruption is a matter of perception for Frank, but Tom is all about the law.

Will Conway lays the law down at home, after suffering his own journalistic hit, because he got caught lying for possibly the first time in his life. He tells his wife to hurry up with getting the baby in her car seat, tells his young son to shut the front door already, and after the release of the two female members of the Miller family, Hannah calls him out for only viewing this small victory through a political lens. “What if that was me and Lily?” she asks. “Don’t get weak on me,” he condescendingly barks at his wife.

He half-assedly apologizes later after things start to go his way again with the Herald’s story. But if Hannah is destined to become the next First Lady of the United States will she be able to come to terms with her husband’s criticisms of her?

For it is weakness, above all, is the most despicable of traits for any politician. The projection of strength has been on the docket for the Underwoods throughout most of their lives. But after Hammy’s story breaks and the video call between Ahmadi and the kidnappers ends not so great, with you know, Ahmadi instructing them to release the video and behead Mr. Miller, Clair and Frank are a teeny tiny bit stressed out.

“I feel numb.” — Claire “I Think I Forgot How To Blink” Underwood

The two go into a kind of trance like state. “War.” “Fear.” “Brutal.” “Total.” Their short hand is repeated back and forth as the two come to terms with the fact that in order to save their political careers, they have to start a very serious, and more than likely deadly war. Like Claire says they are tired of winning over people’s hearts, it’s now time to instill fear into the veins of the American people (Vote Underwood!).

Jackie and Remy ignore the phone calls from the press after going on the record and are free to ride off into the sunset. Be still my beating heart, I really hope those two make it, even though in my bones I know if Claire and Frank make it out of this jam they are going to fuck these kids up.

Tom Yates wanders around the White House like a forlorn school boy looking for Claire, Leann’s all like, “You two banging?” and Tom’s like, “Ugh, mind your own beeswax Leann, God!” But Claire doesn’t have time for her love muffin, although she does invite him to movie night in the Situation Room.

Doug doesn’t want to stay for the movie and goes to visit his GF. He doesn’t want to go into her house because her kids are there (gross!) and the two talk about death, which is like one of Doug’s favourite things. He asks if she was there when her husband died (the one Doug essentially killed) she was not there so there’s no chance for him to get a guilt boner while she recounts the experience. She asks him if he’s ever seen anyone die. His silence serves as a “yes” but what she doesn’t know is that last person he saw die was his last lady friend Rachel whom he murdered and buried in the desert.

“We don’t submit to terror, we are the terror.” — Frank “I Will Burn This Whole Place Down!” Underwood

In the past four seasons breaking of the fourth wall has thus far been an ability that only Frank possessed. With parable ridden asides, or even just a snarky expression, the lens of the camera seems only visible to him. Until now, that is.

Mr. Miller gets his head cut off, and all look away, save for the Underwoods who turn from the screen with the muted beheading to us. Frank has the last words of a season, but Claire has the last glance; she looks at us, directly at us, for the very first time. Her cold and quizzical stare says something akin to, “Judge me. I dare you.”

There won’t be any more judgements to be made for the time being, not until the fifth season.

Shall the decomposition of Demark raise a stench the entire world can smell? Will the world believe Frank’s speech about how the arms are fair, when the intent of bearing them is just? Will the Conways Twitter their way to the White House? Are Doug and Seth actually becoming friends? What will the war be like, and who will survive it?

I guess we’ll all have to wait and settle for the theatre of the real United States political fuckery.

Interwoven Webs – So McCowan’s totally lost control of his Internet surveillance baby with the FBI and CIA pushing him out. With the war effort with domestic surveillance become legal? Is he going to take the fall?

Hamm Fisted – Hammerschmidt doesn’t think Frank’s a killer, but will he eventually go after him for Zoe Barnes and Peter Russo? The truth is still out there. Also, for the record, I would totally watch a spin off show where it’s just Tom looking incredulous, talking to his dog, and trying to get to the bottom of things.

Predict The President — Will the Underwoods win the election? Or do we get more of the compelling Conways? I DON’T KNOW! And I’m actually even hesitant to guess. What do you think?