Claire comes up against her biggest challenge as stand-in President yet as a threat of a “dirty bomb” sends her and other White House VIP down into the bunker. However, the only thing that’s dirty might be the Brockhart backed coo that’s sent them underground. Will the Underwoods rise against this undermining tactic?

This Is Not A Drill

The Secret Service ushers important parties into the bank vault looking safe under the House of White. Claire won’t go in without her husband and stares down the tunnel until she sees Frank’s face. It’s an interesting dance she’s doing: obviously aiming to be in a position of more power than Frank, but also it’s apparent that she needs him.

The previous Intel briefing about a chocolate eating terrorist in Damascus is to blame for the missing truck containing enough radioactive material to blast a 30-mile radius. That’s not for certain, but the General “Obvs wants to blast ICO” Braegher is pretty sure that that this is what’s up and that they should evacuate D.C.

“Is this real?” — Claire “David” Underwood

Almost everyone reacts to the news by David Goes To The Dentist-ing their way through the initial shock. Even Claire searches Frank to see if this was something of his design, but it’s obvious this news has taken most by surprise. Doug is even kind of nice to Leann for a change, as the two ponder the reality that something might really be happening.

The Enemy Isn’t In Here (Or ARE THEY?) 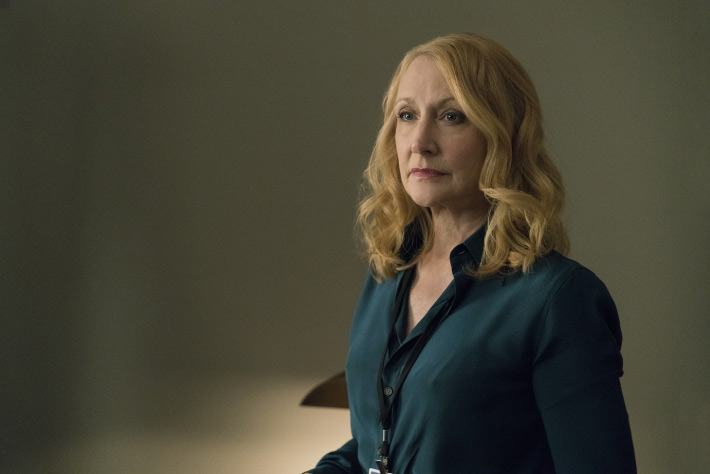 “Did we bring this on ourselves?” — Claire “Out Damned Spot” Underwood

Don’t forget, this is an important day for the Underwoods. There’s to be an important vote about Ohio, and this evacuation has caused “radio silence” media folks like Hammerschmidt are more than happy to point out as BS.

As Braegher continue to push hard for the immediate evacuation of D.C. Claire and Frank wonder what’s worse: that the bomb goes off or that people know they are looking at it. Tensions run high as Frank is trying to wheel the helm with Claire agreeing and sometimes disagreeing and finally Nora’s like “ ENOUGH FRANK YOU AINT THE BOSS.”

Cooler tempers prevail with Claire deciding to wait out the threat until the truck can be located. Her gaze then rests upon one Jane Davis (played by the resplendent Patricia Clarkson) whom she had a meeting with before teh eveacuation went down. Jane’s the Deputy Undersecretary of Commerce for International Trade, but it seems as though there could even be more words added to her title as she tells Cathy she has connections with folks that might be able to negotiate.

Claire sics Doug on her to suss out her deal and the two have a head-a-tete over instant coffee where neither show their cards, and she even reads his pulse. Cool as cucumbers both. Gosh, I hope they fuck.

Once Frank and Claire are pretty sure this dirty bomb is nothing more than some sort of coup Claire orders the Secret Service to Frank out to do some investigation. Frank walks past the portrait of Bill Clinton—perhaps an homage to the potential of his wife Hilary? And then Frank goes ham and knocks over a bust of the third President of the United States Thomas Jefferson. WHY THO? My only Wikipedia informed guess would be that Jefferson served as VP to John Adams and then went on to become POTUS himself —perhaps combined with the Bill painting this is somehow signalling to us that Frank is not interested in his wife moving up from?

Frank goes from smashing busts to taking names and gets all up in Vanessa’s grill like, “WHO IS BEHIND THE COUP? THE COUP IS FROM WHO?!” It works and she spills the beans that it was Bragger and Brockhart who orchestrated the entire thing in order to ensure it the Underwoods would lose.

Once the truck is “located” and the threat no longer an issue, Nora tenures her resignation, which Claire rejects citing that there were some, “human failings” during the whole event.

What won’t be failing is the Underwood’s keen sense of fuckery. Not only did they catch the General trying to usurp their power – which he ostensibly admits to when he’s fired and responds, “You don’t belong in the White House” – but now the power duo have another house in their deck when a recording of Brockhart’s borderline treasonous musing comes into their possession.

Going Nuclear – the race between whether Doug is going to get caught for Rachel or Anthony is still afoot with Hammerschmidt getting as far as identifying the proximity between Posner’s apartment and where Doug was “car jacked” as well as getting a positive visual ID from Rachel and Lisa’s landlord.

Seth’s also got his watch dog Sean running errands and getting closer to figuring out the connection between the Morretti Memorial Fund.

Picture Perfect – What is Frank going to do with the photos of Tom and the tour guide fucking?

Tom Cat – Speaking of Tom, when he finds Leann in Frank’s bedroom, “Are you sure you should be in here Goldilocks?” Man, Tom is just… fucking smooth, man.

Dressed to Kill – Claire’s green military outfit is not only ON FIRE, but I also like how it worked with the episode’s ending where she points out there are no women in the Civil War toys Frank likes to paint. As though she is soldier herself.