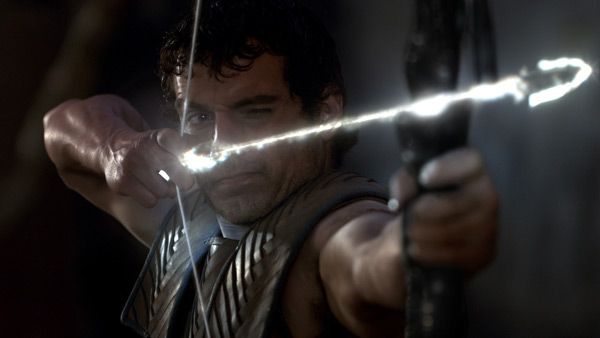 Future Superman Henry Cavill stars as Theseus, a Hellenic warrior looked down upon for being a bastard son. Out for revenge against the power hungry King Hyperion (Mickey Rourke) for killing his mother and all the peasants in his former village, Hyperion searches for the Epirus Bow, a powerful weapon forged by Ares, which can unleash the imprisoned Titans and help defeat the Gods of Olympus. Theseus, who has been trained by an incognito Zeus (played as a human old man by John Hurt and as a God by Luke Evans) since he was a child, is the only mortal powerful enough to stop Hyperion, but given his past, he struggles with helping to preserve a culture that never treated him fairly. His love interest comes in the form of a virgin oracle (Freida Pinto) who foresees Theseus possibly joining forces with Hyperion despite his claims to being duty bound by Helenic tradition.

Rourke and Pinto shoulder most of the acting weight here and are always engaging to watch on screen, while Hurt and Evans are stuck playing the characters who only come in to be the literal deus ex machinas. Stephen Dorff and Kellan Lutz show up as a thief and Poseidon, respectively, but try as they might neither character is developed further than being people who can easily get Theseus out of a jam. As for Cavill, let’s just say one shouldn’t get their hopes up for Superman just yet. Granted, he is playing a brutish swordsman, but he has no charisma at all and watching him trying to emote when upset is darn near laughable.

Cavill’s performance is pretty indicative of the boring nature of the film. It’s great to look at, but there is no substance. Every bit of the budget is put up on screen, but the normally wild and crazy Singh is curiously subdued and the production design comes across as something coming about three or four years too late to cash in on the success of 300. The only real moments that showcase Singh’s vivid imagination are the beginning, the end, and the few brief moments where the film shows what happens on Mt. Olympus. Other than that, this film is just a string of average battle sequences with digital gallons of fake CGI blood.

Immortals is a film that goes through the motions, slavishly hitting every epic and mythological convention along the way. Nothing even slightly surprising happens, which would be fine if not for the fact that big budget epics have grown stagnant with the exception of TV’s Game of Thrones. It’s about as sexist and violent as one would expect such an epic to be, but for the genre it’s nothing out of the ordinary. There’s not much to really knock in the film, but there really isn’t particularly worth recommending either.