In the summer of ’96 I returned home after a year abroad in Europe. During that time I’d immersed myself in arthouse cinema on an almost daily basis, building up my repertoire of films from all over the world that would play a tiny theatre near my appallingly tiny apartment. I attended my first Cannes, reveling in films like Fargo and Trainspotting and Breaking the Waves, shattering my expectations about what cinema could even be.

Returning home, the first thing I did was watch Twister. It was a palate cleanser of sorts, a slice of dumb after all that cultural gorging. It was fun, sure, but I felt betrayed by all the “plot” – for years now a friend and I have suggested that “Twister: The Imax Experience”, a 45 minute film that just showed storm damage on a big screen, would have made for a better time.

The big beastie that summer, however, was Independence Day. Even at that Cannes you couldn’t escape the invasion, a giant alien ship seemingly crashed into the façade of the Carlton. It was this thing looming over, reminding that for all your parlour pieces, quirky noir films and kinetic, drug fueled trips to Scotland there was Hollywood spectacle waiting… Looming.

ID4, as they dubbed it, remained the most Roland Emmerich of all Roland Emmerich films. Taking a slice of 1950s sci-fi paranoia, 1940s jingoism and 1990s post-modern mashup of all the above. The next year would see Paul Verhoeven do the ultimate 90s trick, making the beautifully ironic and sardonic Starship Troopers that both undermined the tropes of this destruction, made manifest the Nazi iconography, and questioned our thirst for watching shit blow up real good.

ID4, importantly, lacked not a fiber of that introspection. It was landmark ravaging, pure and simple, adding in a menagerie of quirky characters to pull of the implausible, all while the score swells and the explosions fire away.
In the last two decades such destructoporn has found new home in the biggest films of the moment, with comic book films (and their cousins, the action-figure flicks like Transformers) finding oodles of space to play with architectural deconstruction, made all the more easier that it’s just pixels rather than loving constructed balsa wood edifices crammed with pyrotechnics.

So some twenty years on it feels both timely and redundant to have another July 4th fireworks display showcasing aliens battling Earthlings. Independence Day: Resurgence could easily have been titled Resurrection, except that sub was used for another alien-themed franchise. For lets not kid ourselves – most of what ushers ID4:2 into the multiplexes is a hope, even a small one, that Fox is going to get a slew of flicks out of this narrative. 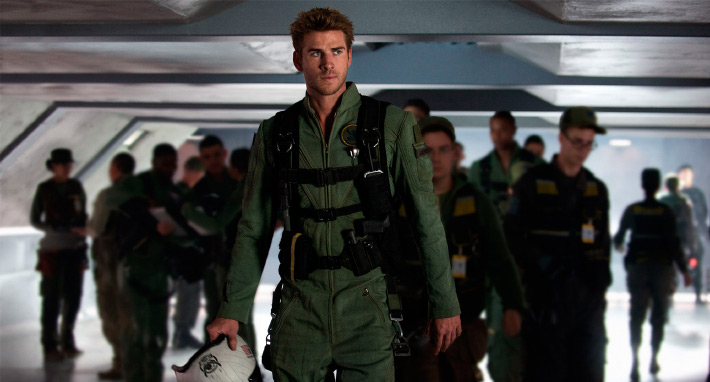 In the time between this film and the original, man has used the abandoned technology of the invaders to construct their own defences. The old president (Bill Pullman) is frail and delirious, his daughter (Maika Monroe, subbing in for Mae Whitman in the original) worrying about his state. Jake (Liam Hemsworth) is a spacetug driver wishing he was a fighter, after a collision with his frenemy Dylan (Jessie Usher).

Besides the good looking kids doing most of the derring-do, there’s the old hats, led once again by Jeff Goldblum who helped take out a civilization unaware that they should always have anti-malware protection on their software. Judd Hirsch remains as cantankerous as ever, Brent Spiner’s been comatose but awakes with visions of grandeur, and Charlotte Gainsbourg shows up, surprisingly, clearly not above wanting a Hollywood-scale paycheck for a change.
A shout-out should be made to Angelababy, whose character Rain Lao speaks to the real change that’s taken place since the last film, with the emerging dominance of Chinese cinemagoers for international spectacle. Michael Bay and many others have gone down this path, but what’s perhaps notable is how soon this kind of shoehorning of Asian content into American studio product to sate foreign sales speaks to a titanic shift in how culture is being disseminated within the context of globalization.

So, what do we get this time? Well, London gets ‘sploded, for one (they even joke about the bad guys liking landmarks as targets). In fact, a visual joke’s made about the White House not being destroyed on the other side of the pond, while the protection of underground bunkers seems more prone to the vicissitudes of a mad queen. We get moments of ships zinging away in dogfights, there’s the world coming together via shortwave, and giant balls teach us that there’s a bigger battle at play here, setting said stage for what’s to come… later?

Yet I must admit I had fun. I enjoyed Hirsch’s Yiddisisms, and the chutzpah to literally have a busload of children heading towards a nuclear explosion. I liked DeObia Oparei, who uses machetes to stab the bastards in the back and speaks of the “warrior’s heart”. I mostly like that it felt like the pilot to a very silly TV show (helped I guess by Spiner being there to remind of Trek), a $165 million dollar version of an episode of Battlestar Galactica without any of the Mormon stuff bogging it down.

In IMAX, and in 3D, it looks terrific. Trails of green glowy stuff, giant energy beams, even the particles flung in the air due to destruction are all beautifully rendered (pun intended). The film has an open-eyed, unabashed glee in milking its thrills, adding in a meta-nationalist jingoism that seems completely in keeping with the inane silliness.

Despite the awkward shoehorning of narrative elements and clear need to set the stage for what’s to come there’s actually a surprising lack of cynicism at play. We bounce from setting to setting and it all almost makes sense, finding ways of allowing a ground battle from within the bowels of a ship just to add another environment to showcase.

I guess in the end I’m not sure that this film is worse than the first one, and that may be enough. I don’t know who has been craving a return to this sandbox, but here we are – this surely won’t be the most egregious reboot/resuscitation we’re going to see in the next short while. Emmerich has an infectious glee for watching things be obliterated, and this canvas seems to be a better one for him than the likes of Godzilla, 2012 or even The Day After Tomorrow.

So, in short, this is a big, dumb, summer movie where we’re not supposed to really care that it all comes together. Yet maybe it’s the mix of nostalgia and sweetness at play, as well as a sense that this is something the director cares about – for one, there’s a touching scene that Emmerich uses involving a same-sex pairing that’s soon to be as unremarkable as the inclusion of the Chinese elements. For now, though, this is groundbreaking, as strange as that sounds, and it at least shows a glimpse into his investment into the work.

Is that enough? Who knows. But the film doesn’t meander, it’s decently paced, it looks damn fine and you get Pullman, Spiner, Hirsch and especially Goldblum chewing scenes like mad. Should you see it? Who the hell knows. But God help me, I think I kind of liked Independence Day: Resurgence. The end may well be nigh.