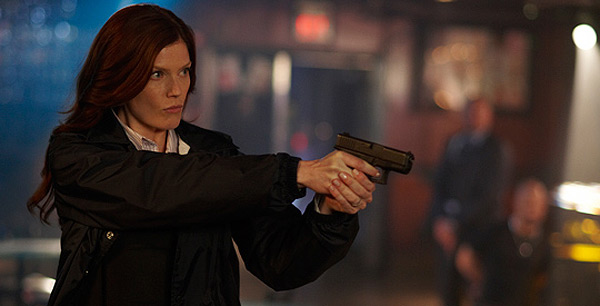 Amy Price-Francis calls in from the Toronto set of her latest television show, King. The television veteran knows quite a bit about the medium and the long hours required to keep up such a rigorous shooting schedule. When she calls, it’s deep into shooting on the Showcase drama’s second season, which debuted last week and shows every Wednesday at 9pm. On top of that, Francis is also making the press rounds to tout the DVD release of King‘s first season (out this Tuesday from Entertainment One). There might not be any rest for the weary, but Francis talks with great enthusiasm and energy about her starring role in the Canadian crime procedural.

Francis – who comes to the show by way of high profile turns on 24, Rumours, The Cleaner, and Californication – plays Jessica King, a former homicide detective once disgraced for actually being honest about the dirty dealings of some colleagues, who finds herself heading up the Major Crimes Task Force, a group of officers brought in to intervene in cases where the day-to-day beat cops have made seemingly irreversible mistakes. In addition to her new position, King finds herself dealing with a team that’s slightly mistrustful of her, her slowly drifting husband, an affair with the man whose job she took, and by the end of the first season, her pregnancy.

Francis talked to Dork Shelf about the pressures of carrying a television show as a lead, the group dynamic of creating a procedural show, and what to expect from season two of the show.

DS: You’ve done a lot of television in your career and you now find yourself as the centerpiece of this show. Do you find that to be a little more freeing to play a lead than it is to play a supporting character like you’ve done a lot in the past?

APF: Well, I do find it more freeing, but I do think that first and foremost that’s really a testament to the writing and the crafting of the character of Jessica King. She is just a gift to play, and I’ve really been fortunate to play some really wonderful women in my career along the way in leads, supporting roles, and even as a guest star, but having the chance to really spend so much time with someone and to explore them so fully in a show that’s not only a procedural with a case each week but also a show where we delve into her personal life quite a bit in every episode – her marriage, her quest to get pregnant, how that affects her and how her work affects her life in turn – that makes her really the most well rounded character that I’ve ever had the opportunity to play. So that just in itself is really freeing just because there’s so much to explore and it’s so well done.

DS: That’s something that really gets to what sets the show apart from other procedurals, and that there’s a character that’s the exact focal point of every episode. Since there’s such a tight plotting on the character’s arc, if you had any ideas about the direction of your character is that something you would have to bring up well in advance?

APF: You know what, I really don’t have that many ideas for the direction of King. This is all our wonderful , wonderful creators and writers of the show. I’m never sure what’s coming up next, but they do such a terrific job that I’m thrilled every time I get to read the scripts. They’re taking her on quite a journey, and it’s a very realistic one, and it’s not an easy one. She wins, she loses; she has highs and lows, victories and losses. That’s what makes this such an incredible job because it’s just such a full position to explore.

DS: It’s also rare to see such a show based around such a strong female character. It seems like something a lot of networks would really shy away from. Was it a bit more of a grueling task to try to land the role of King and what did you do to try and make yourself stand out?

APF: To be honest, I was approached by the creator and producers of the show and they expressed their interest in me coming in and allowing the network to see my work. It was actually pretty easy. I was working in Vancouver, I wrapped the show in a Friday night, took an evening flight, and on a Saturday afternoon and maybe one or two other actresses met with the director and the creators, and with great luck I was handed the role.

DS: I know a lot of actors who play any sort of law enforcement officers like to go through some sort of research or training. What kind of preparation goes into playing a role like Jessica King?

APF: There was absolutely some training. King comes from being a homicide detective for eight years, so there’s a lot of research there. When she was trying to get pregnant and she was going through the in vitro process, there was a lot of research for me to do there. Again, however, I have to bring it back to the great writing, because the research is so much in the moment. You know, it’s all a part of the discovery of the characters in those moments because it’s happening as I discover it. The writing guides me to those discoveries. But, you know, having said that, of course there was numerous conversations that were had with members of the metro Toronto police: detectives, sergeants, homicide, people from emergency task forces. There’s been gun training and some physical training that’s par for the course.

DS: What would you say was the hardest part for taking on the role?

APF: The thought that they had made a big mistake, honestly. (laughs) I was in Chicago, and I was working on a show there, and I was in my hotel room, and the phone rang and I found out I had gotten the job, and I was just thrilled. I think it was a long weekend, so my manager in Los Angeles was on his way to Palm Springs and he’s honking the horn at people and I could hear it over the phone. Yeah, it was a holiday because my agent in Toronto was with her little nephew and he was jumping up and down over there. Then another gentleman that I work with, he was at his cottage. So I was sitting there alone in this hotel room and it was such a thrilling moment, and I got off the phone with them from all these congratulatory calls and I just sat there in the quiet wondering what I had done with my life, and just thinking that these people had just made a terrible mistake. It was really just getting over the anxiety of it all, getting out of my own way and just getting myself to the work.

DS: You have a great supporting cast backing you up every week. Was there anything that you guys did prior to the show to bond as the unit you have to play every week?

APF: The casting on this show is so extraordinary, not just the regular cast, but I have to mention our guest stars. I’ve had the amazing fortune of working with so many great actors on this show, so that in itself raises my game every week. Such talent, and of course those of us who worked together last year have that shared experience. And we have two great new actors on the show this season in Karen Robinson and Rossif Sutherland. Both are delightful and extraordinary people. I mean, a lot of us had the bonding of going through cop school together and some gun training. We do tend to go out once in a while for a nice meal and maybe a few too many glasses of wine, but we all really enjoy spending time with each other both at work and away from work. I think that only enhances what you see on screen.

DS: The writing and dialog on the show is very snappy and fast paced. You come from a theatre background, where that’s kind of standard. Do you find yourself drawing more on that background for this show than any that you’ve done in the past?

APF: Absolutely, that’s more than a fair thing to say. When I read the pilot I was blown away by the rhythms and the music of this writing. It’s very much like a well written play, and you don’t often get television writing that’s playing at such a high level, but that also means it is a bit more demanding and challenging. But the shots at rising to the occasion are a part of the great ride, and you don’t always win, but it’s a testament to the acting talent on the show. Funnily enough, I think most of the actors on our show have a theatre base. The creator of our show/writer/executive producer, Greg Spottiswoode, is an actor himself with a theatre background. He’s moved more into writing and producing, of course, but he brings in a lot of actors with that background because he’s aware of exactly what you just said. He knows there’s a specific kind of training that’s very helpful when it comes to such sharp writing that demands a special kind of dexterity to uphold.

DS: Now that season two is underway, what can we expect from Jessica King this time around?

APF: We pick up right where we left off at the end of season one. King is pregnant and her marriage has ebbs and flows just like any married couple. Her sister Lisa has a greater presence in the show this year. We have some great cases and a bit more action this year than last year, and I hope the audience continues to enjoy it. I know those of us working on the show certainly do.

King airs on Showcase every Wednesday night at 9pm on Showcase. King Season One is available on DVD this Tuesday from Entertainment One.