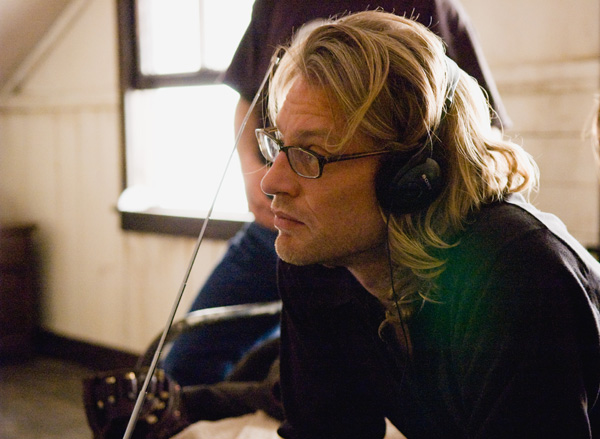 Australian director Andrew Dominik almost didn’t get a chance to make another film after his previous film, The Assassination of Jesse James by the Coward Robert Ford, became a notorious box office flop en route to showing up on numerous critical best of the year and best of the decade lists. After studio interference resulted in little marketing push and a shortened cut of the film, the Chopper director moved to a smaller and angrier film for his follow up starring his previous Jesse James.

In the economically minded and viscerally violent Killing Them Softly (based on one of George Higgins Boston set 1970s novels, Coogan’s Trade), Dominik re-teams with Brad Pitt for the tale of a hired gun brought to Boston to kick over some tables and put some hits out on a pair of low level trigger men who knocked over a mob backed underground poker game. Set in 2008 amid the end of the Bush era and deep within the throes of the American sub-prime mortgage crisis, the film is a socially minded crime thriller that balances the relevant within an underground criminal world.

Dork Shelf talked to Dominik about how the film ties into his previous work, his collaboration with Pitt and actor Ray Liotta, and the impressive sound design of the film.

Dork Shelf: Coming off of Assassination of Jesse James, how much of the tone of Killing Them Softly was a reaction to what you experienced during post production on that film?

Andrew Dominik: That’s really quite an astute observation because it’s really an outgrowing of Jesse James because I guess I felt kind of jaundiced at the reception of Jesse James. Everything was just about money, you know? There were even reviews of that film that attacked the movie on financial grounds. “What crazy person would spend this much money to make a movie like this?” That sort of thing. Over time it felt like the only thing anyone really ever gave a shit about was money. I guess that that sort of sense of jaundice in this film comes from that, I guess.

DS: You’re also teaming up again here with Brad Pitt, who could also be seen here as a character that’s a distant cousin to someone like Jesse James. Was there any ever any trepidation to re-teaming with him after your previous work in a similar sort of gunslinger territory?

AD: No. Not really. I really like working with Brad, and I trust him. He’s bright, and I never have any fears about working with him. I’m just glad that he likes to do it at all. (laughs)

DS: The three major features that you have done in your career are almost completely devoid of heroes. What draws you to these kinds of narratives?

AD: I just don’t really believe in heroes. I don’t trust them.

DS: So you think it would be better to be a well rounded asshole than a false hero?

AD: (laughs) Actually, yeah! I think all of my friends are some well rounded assholes. Yeah. (laughs)

DS: The film definitely has a strong, just slightly removed economic message. Do you think if more time had passes between your reading of Coogan’s Trade and the making of the film, you would have placed it in a more current economic period?

DS: No, probably not really. I think you would have actually had a harder time trying to explain vaguer concepts like what a “fiscal cliff” is, but it could largely play the same.

DS: Coogan’s Trade was originally a Boston set tale and there are references to Boston suburbs and neighbourhoods, but it was filmed elsewhere (New Orleans). Was that to give the film a deliberate feeling that it was a story that could take place anywhere?

AD: Yeah, it was. I wanted it to kind of have the feeling almost of a political cartoon and make the setting seem a bit more generic. And also, the Boston crime movie has really become it’s own identifiable sub-genre now and this is a little bit different from that. It’s kind of funny, too, because the one bad review we got in Cannes was from the Boston Globe.

DS: I wanted to talk a little bit about Ray Liotta’s character of Markie, because he really has his own separate tragedy going on within the film, and he’s on the receiving end of some of the film’s most violent sequences. He seems to be the surrogate in a lot of ways for the common, everyday man in the economic downturn. What led to his casting and what did you see in him for this role?

AD: I think with Ray I just needed that character to have a bit of glamour to him, but it doesn’t really serve him well. It felt like Ray fit the bill, and because he’s been on the other end of one of the greatest cinematic beatings in Goodfellas. It would be unsettling in a lot of ways for an audience to see him on the receiving end. Does that make sense?

DS: Yeah, it does. And in a sense you’re using him as a paintbrush in some of the most striking and technically challenging scenes and shots in the film. What kind of relationship do you have to have with your actor in those particular kinds of situations where they have to convey vulnerability within a technically demanding sequence?

AD: The thing about Ray and any kind of scene of violence is that it depends on the sympathy on the side of the victim. You need somebody that you can feel something for and you can have someone who can convincingly pussy out. Ray is basically humiliated, and to find an actor who can go along and collaborate and plan to do it that way with no ego is pretty unusual and rare. But Ray was someone who could get as personal and all out as we needed. I love the guy. He’s such a trooper, and he’s a true actor.

DS: In a lot of the film’s more violent sequences you seem to be moving a bit at the speed of life where sometimes things will be drawn out and other times they could happen in a flash. When as a writer and a director does that ultimately come together for you?

AD: Screenplay. Visually you have an idea of how you want scenes to develop and you plan them out. Like the shooting in the centre of the picture is something you just can’t wing. You have to plan.

DS: One of the things I wanted to ask you before we go is something I rarely get a chance to talk about with directors and that’s the sound design of the film, which is truly something special not necessarily in terms of the use of music, but of creating an immersive experience. How closely do you work with the sound department in post-production?

AD: Really closely. I love to use sound often in place of a technical score, like when you have music in movies you often use it to set a tone somewhat falsely and sometimes I feel manipulated by it when you can use actual sounds to do the same thing. If you treat it carefully you can do something special. I like to find things that can hit high pitches and bass notes to create a palate. We fucked around with sound for hours. It took six weeks to mix the picture, and we really wanted to spend the time to get it exactly right. I also worked with a great sound designer, Leslie Shatz, who loves to do that stuff. Leslie is fantastic and he’s really about the feel of everything to the point where he’ll even let you use bad sound, like poor quality sound, which it’s very tough to get a professional to do. He just treats it like music and that’s really close to my own attitude on it.