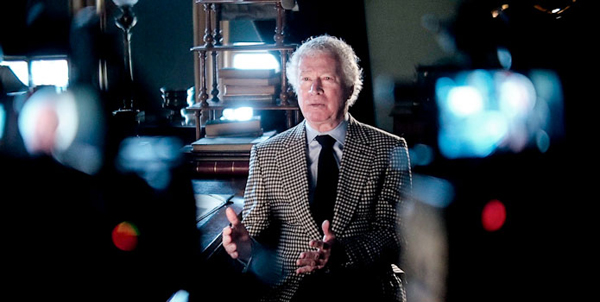 Drew Taylor and Larry Weinstein are not making what many believe is “the Canadian answer to Argo” with their documentary look at the US-Iranian hostage crisis, Our Man in Tehran.

While a Canadian production that does delve a bit deeper into this country’s role in protecting several US officials in the American embassy under the watchful supervision of former ambassador Ken Taylor, it’s more of an overarching view of the chaos surrounding the 1979 Iranian revolution and the ensuing hostage crisis. It’s not only about the Canadian role in Iran, but also the efforts at home and the political climate in Washington. It takes a while to actually get to the now infamous fake-movie plot to get the Americans in the embassy out of the country, instead looking at how this situation could even happen in the first place. It also, quite thankfully, talks about all of the Americans who weren’t lucky enough to escape to a secure location and were kept for over two years as hostages. It’s certainly more comprehensive than Ben Affleck’s Oscar winning and more fictionalized account of events, but also more nuanced and thoughtful than many of that film’s Canadian critics probably imagined.

It’s also delivered at the hands of an unusual couple. Weinstein is a veteran documentarian director and producer who worked on films like Inside Hannah’s Suitcase and Thirty Two Short Films About Glenn Gould. Taylor, on the other hand, is a first time filmmaker who holds a doctorate in biology and was a former pitcher for the Toronto Blue Jays and Philadelphia Phillies.

We chatted with Drew and Larry last week at a downtown Toronto hotel on the day of the film’s premiere at the Toronto International Film Festival about their partnership, the importance of talking about the history behind the hostage crisis, their own experiences with Ken Taylor and how the former diplomat helped them gain access to interviews they wanted to have in the film.

Dork Shelf: Before we even start talking about the film, I find it interesting that one of you is kind of a veteran at this, and the other is making this their first film after an already interesting career doing other work. How did you guys get together for this? 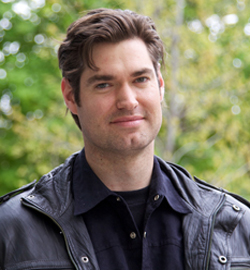 Drew Taylor: Well, we’re a small group, the production company I’ve been working on, and I’m obviously a first time filmmaker. It’s Elena Seminka, myself, and my brother Matthew. We have this really small company at the moment, but we realized the magnitude of this story. We dove right into it and we were so excited to talk about this subject, but we also realized that this is an important story that requires a tremendous amount of accuracy and integrity. We wanted to do it to the best of our ability and do it justice for Canadians and Americans and everyone involved. So with that in mind we took the story to Rhombus and sat down with them, but we brought Ken Taylor as a guest, so it was a bit hard for them to dismiss us. (laughs)

But you realize that when you make a movie like this you can’t only have Ken Taylor. We needed people like former Prime Minister Joe Clark, and Ken was the person who would say “Oh, that shouldn’t be a problem. You should be able to get Joe.” We wanted to at least try and talk to Jimmy Carter, and Ken says “Oh, yeah, Jimmy and I are friends.” (laughs) So then it all became real.

At that point we sat down with Larry and told him what we wanted to do, and he obviously helped us to formulate a tighter story in those initial discussions. I think after a while he finally relinquished and decided to help us.

Larry Weinstein: I was kind of an asshole at first. (laughs) I knew with Drew it was never going to be an issue of him being a first time filmmaker. He was a Ph.D. candidate, a scientist, and he had an entire baseball career. He has done all of this amazing stuff, and in talking to him it was obvious that he had concentrated on this for a while, and he was so aware of the subject matter that I knew in his head he had already partially completed the film. I thought that I could help him find the form of the film more than anything, like how it’s shot, bringing in my favourite camera guy, and really good composers and archival researchers so we could go ahead and just make this happen within Drew’s vision. Drew had also come with the writer Robert Wright, who wrote the book Our Man in Tehran, which we stole the title of for our film.

It was great, and because Drew was so smart he caught on almost immediately to film form, and he started getting totally into the content to a point where after a while we began to blend our roles a little bit. We got to know each other well enough that we’ve been talking about doing other films together. It’s been fantastic.

DT: For me, I couldn’t have thought of a better first experience into filmmaking for Elena and I. Coming into this industry to have the opportunity to work with people like Larry and Niv Fichman, our producer over at Rhombus who just has a reputation for producing amazing films. But what I wasn’t aware of and I didn’t understand was going to be so great was when we started working with Larry and Niv was how much we were going to be embraced. It was amazing how great they were working with first time filmmakers and helping them to understand certain approaches and when we might be wasting our time, but they were also able to give us so much room to breathe so we could actually make those bad choices, realize them, and take a step back. (laughs) Coming out of it, that was the best experience we could have hoped for.

DS: I think one of the things about the film that’s really important was that not only is it true to the American and Canadian sides of the story, but you also provide a lot of context and history of the Iranian revolution before you get into the specifics of each facet of the ensuing hostage crisis. It’s not meant to be a slight, but I think when people hear the title they might automatically jump and think it’s a film strictly about Ken Taylor, given the film’s country of origin and the recent Canadian media kerfuffle over Argo last year.

LW: We actually could have been more ambiguous about it. Our Man in Tehran could actually be referring to the Shah or Khomeini or any number of different people. It’s weirdly implied in the film in some ways, but really it does refer to Ken.

DT: And our poster kind of gives that away. (laughs)

LW: (laughs) And Jimmy Carter’s quote, as well. It was a bit of a conundrum, because the film was going to have a larger part about the exfiltration of the six inside the Canadian embassy, which Argo already covered. In a way the Canadians were so good at protecting those six people that nothing really even happened there outside of what was covered. It was in our research that the Iranian Revolution was the fascinating thing, and for a while I was suggesting that we just do the film entirely on the Iranian Revolution and forget all that other stuff. And everyone was like, “Larry, you can’t do that.” (laughs) But seriously, everyone wanted to have that sort of context and arc.

DT: We knew that the Shah had his own story arc, and the Ayatollah had his, but we always knew that people were going to expect that a film made by Canadians a year after Argo and making its premiere at TIFF would be seen almost as a bookend to the story would act as a Canadian answer to Argo and not a stand alone documentary. I think people when they hear of this are expecting to see a certain thing on screen and expect that right from the get-go we would be jumping right into the story of the six, and that was a challenge for us in a way. Those are expectations for Argo, not for our film. Our film is very much about the Iranian Hostage Crisis and its entire context to include the stories of the Americans who weren’t as lucky to be sheltered and what was actually going on back home here. It’s not just about what Ken did, but what Joe Clark and Canada and working with American intelligence and the implications of all of that. Those are things that need to be talked about within the context of what was actually going on with Iranians on the ground and what it all meant to them.

DS: It really is interesting to see what was going on in Parliament at the time, as well, because it shows a just as interesting power play between Joe Clark and Pierre Trudeau. It was kind of shocking to see how Trudeau seemed to be using the situation to his own political advantage and somewhat unwittingly putting the American hostages into a dangerous position.

LW: It was a situation that not everyone in government knew about, but one that a lot of people used to their own advantage. People generally have these fond memories about Trudeau, and you never really think of Joe Clark as a hero type, but in this situation where if you look at it closely, their roles and how history perceives them were flipped.

DS: It seems like this was a situation where for once it took the bigger man to keep his mouth shut for the sake of the greater good.

LW: Yes. And we talk about this and how Joe Clark never used this situation to his own advantage. We were in the middle of an election, and Trudeau knew about the situation and used it to his own political gains. Joe could have used the whole exfiltration as a big thing for his campaign, but he never did, and that was kind of remarkable. You contrast that to someone like Ronald Reagan being an asshole with Jimmy Carter, and it’s very different.

DS: One of the things that I love you for bringing up in the film is how Ken Taylor used to get a lot of his information about what was going on wherever he was from sitting in a bar and how he liked to always refer to the bar as his “office.” Did you guys get to take a meeting with him at his “office”?

LW: MULTIPLE times. (laughs) We’re bad drinkers, really, so that was a disadvantage to us. But some Iranian people that we talked to who knew him there and then that he was brilliant and in his natural element there. He would get all sorts of business done there, and his main job as ambassador was to bring business to Canada. He would meet people at these bars and he’s so congenial that later on he was able to use those contacts to help get people out of there. And he never forgot his contacts, either, and he was able to bring some of them to North America later on, which is something we don’t touch upon in the film. But that seems to be his most natural environment.