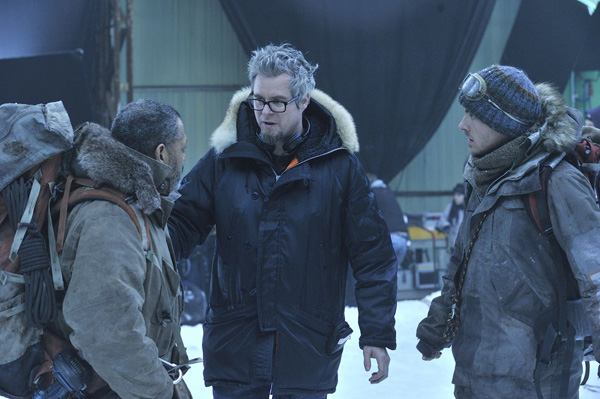 It’s the night of the premiere of the Canadian post-apocalyptic thriller The Colony and director Jeff Renfroe and leading actor Kevin Zegers are sitting down to do an interview together. It seems like a it’s been a while since the two were together; probably since around the wrapping of the largely North Bay and Toronto shot thriller about a band of survivors huddled together in an underground bunker while a perpetual snowstorm blankets the world and a set of unknown and deadly forces from outside the colony threaten to make everyone’s life a living hell.

Co-starring Laurence Fishburne as the sage leader of the underground community and Bill Paxton as the gruff and violent second in command, Zegers plays a mechanic tagging along with his boss and a young man to answer a distress call from another nearby outpost. Things start to get real when the problems that plagued their sister colony follow them back to their own doorstep.

Filmed somewhat in an actual retired NORAD bunker, the film tells a story about an environment out of control where even sneezing around other people could potentially get you killed. For Renfroe, making his biggest budgeted feature to date and one of the highest profile Canadian productions of the year, the challenge was one unlike anything he had previously dealt with before.

Dork Shelf caught up with Jeff and Kevin on the day of the film’s Canadian premiere to talk about the film’s cold shoot, what it was like filming beneath a mountain, finding the characters, and making such an ambitious film on a limited budget.

Dork Shelf: You guys were up in North Bay in this NORAD bunker filming some of the sequences for the film. What kind of a challenge is it shooting in such an enclosed space, and what’s it like crafting this character that has barely seen daylight in years while shooting down there?

Jeff Renfroe: It was pretty awesome.

Kevin Zegers: Yeah, and you can’t bring your cell phone or anything down there because nothing will work down there. It was all about the work. Most of the time whenever someone yells cut on a set everyone goes over to check their cell phone or they’re off reading a newspaper. It was really bleak down there, so everyone was just, like, “Let’s just shoot this as fast as we fuckin’ can so we can get out of here.” For me, that makes the job that much easier.

JR: Oh, yeah, for sure. I remember when we first scouted it, we went down there and had such a creepy quality to it. The first time we were down there we were literally seeing the last of the computers getting taken out by Army personnel, but that was it. It’s this giant, ghostly facility, and you really feel this kind of weird weight knowing that there’s a mountain directly over you. But it’s not really that contained or claustrophobic, really. It’s a big space down there. I’m quite claustrophobic and it’s weird that something like this didn’t get to me at all.

KZ: Oh yeah, you could go for a jog down there. There was things down there that you wouldn’t think we down there, like this little kind of school room. You wouldn’t think about it, but you could walk around and go up and around and up and down the stairs and there were always things that you could find easily, like other rooms and bathrooms. It wasn’t like it was a rat hole down there or a bare bones bunker. But still, driving down a hill and through rocks is a bit weird.

JR: Yeah, the tunnels that are just all rock really serve to remind you that you’re inside a mountain.

DS: It’s also a really cold looking movie when you guys are up on the surface. How much of that was outside and how much was recreated on a sound stage?

JR: Well, we made a kind of interesting hybrid. We didn’t want to shoot out in the open snow for fear of what would happen if the sun were to come out or if the weather got worse and there was suddenly a blizzard. So we moved snow into a three walled hanger and had three walls of green screen and lit the fourth. So our actors are walking on real snow and it gets really fucking cold, so you have the breath there. Our first few days were as cold as minus thirty, so when you see something like Bill Paxton’s bright red nose, that’s not make-up. (laughs) It was really that cold down there.

KZ: It could be pretty brutal in there. The first day the lenses actually froze, and it has to be really cold to do that to something like a camera lens.

JR: We were using really relatively new camera technology. We were shooting on Arri Alexas and I even remember asking “How are these in the cold?” And my DP, Pierre (Gill), just looks at me and says “Nobody knows, man!” (laughs) We were among the first to test this shit out. (laughs)

KZ: They should have paid us for that. (laughs)

JR: Could have been a whole commercial for the Alexa.

DS: Kevin, your character is sort of at a point in his life where he can really go one of two ways. He’s struggling to remain humane and humble, but as we learn you have also come from a situation that was less than ideal as we learn while the story unfolds. What’s it like balancing between being a leader and a potential kind of darker side to your character?

KZ: I don’t think this was a character who before this point had really given much thought about who he was ever going to be or that he even needed to be anything. I think he just was who he was. He had managed to find his way to this place when he needed it, and while he was grateful for it, I think he’s reached a point where he’s no longer an optimistic guys. He doesn’t know if he should just stay there until he dies or if he should try doing something else. He doesn’t have any of the real qualities of a leader, to be honest. He’s certainly not at the beginning, and even when he volunteers to go it’s really just to help and save another guy from having to do it. Then I think once he gets thrust into this situation, he’s kind of testing himself just to see what he can do. It’s just as much a possibility that he’ll just piss his pants out of fear and not want to do anything. I think part of the fun is playing someone who’s always unsure of what his own reaction will be until something actually happens. He’s not a guy who is big on planning, and he really hasn’t been. He feels himself getting comfortable, and he doesn’t want that, and there’s no real boundaries with a character like that. When you start there we can play about how he feels about this new version of himself and where he ends up being by the end of the movie. He might even go too far in one direction by the end of the movie, but I kinda like that. Depending on who you are and what situation you find yourself in people are capable of doing just about anything.

DS: There are a lot of big set pieces in the film, and you couldn’t have had a huge budget to pull this off. How creative did you have to get when you have this story and you have to figure out what worked for your vision and what was best for the production?

JR: I have to say that the last three weeks before production were hairy, man. The reality of what we could actually afford came crushing down on us. But I think we prioritized really well and we kept the things that we knew were necessities that deliver with this kind of movie. It’s like anything in filmmaking: there’s never enough money and never enough time to do everything you want to do. For me this is a huge film. To come off of a couple of million dollar indie movies and to jump into a $17 million production, that’s great in terms of being able to play with more money and more toys and to have the chance to build a movie with more scope than just having three dudes in a room, which is kind of your average Canadian movie. Not that there’s anything at all wrong with that, but for something like this it just wouldn’t work. It was a struggle to kind of keep those set pieces in there, for sure.