Minority Media’s Vander Caballero on the need for more empathy and emotion in games.

At Gamercamp earlier this month, Vander Caballero of Montreal’s Minority Media explained that while games have a reputation for not pulling off emotion well, they actually do some of them extremely well. Fear, ecstasy and rage, for example.

But they comparatively suck (his word) at grief and love. These have something in common: to feel them, we need empathy. These were the emotions he wanted to evoke with Papo y Yo, the puzzle-platformer that served as an allegory for his childhood living with an abusive, alcoholic father.

We spoke to Caballero at Gamercamp to expand on some of the themes and ideas he mentioned during his talk.

Dork Shelf: You were talking about games and empathy today at Gamercamp. What was the greatest hurdle towards making a game that could express empathy for the players?

Vander Caballero: The biggest challenge was the publishers. They’re not used to that. The formula to create empathy in games is that you have to spend a lot of time with something, and do things that may not be meaningful in the holistic view of the game, but that actually help you to create empathy. You have to spend a lot of time with a person to make them care about it. And this has to be built up. Many publishers just want you to get right to the point, they want to give you that accelerated experience right at the beginning so that players get hooked. Suddenly we’re like, “No, no. We’re doing it differently.” There are not many publishers who are up to this. Sony’s one of those.

DS: Do you see any other games that are talking about empathy in the same or similar ways that yours does?

VC: Journey and The Unfinished Swan are doing it. I think those two are it for now; I’m sure many others are on the way.

DS: The main setting is a fantasy version of the favelas in South America. What are your connections to that setting?

VC: I grew up in South America and I came from a wealthy family. As I saw the favela grow, poor people lived next to rich people.

The maid that helped us at home lived in the favela, and sometimes we would bring her home. I grew up with white walls and straight lines, but when I went to the favela, wow! There are all these houses but there were no straight lines. And it was really beautiful. It was architecturally really interesting.

DS: You talked about being unhappy despite being in a wealthy family.

VC: There were these contradictions when I lived as a child. They told me, you cannot be poor because poor people suffer. But I was rich and I was suffering.

DS: Who told you that?

VC: My family. When it was time to create the game, I found it really interesting to bring that contradiction up. That’s a contradiction we’re slowly feeling more and more in North America. Money doesn’t buy you happiness, and also there are struggles when you’re poor. But there are also other ways to live life. You don’t need a huge car to be happy. You may just need a better connection with your family.

DS: You were a design director for Army of Two, which is obviously a very different kind of game. Were there any experiences or lessons you brought over when you started working on Papo y Yo, or was it “forget everything, we’re starting completely fresh?”

VC: No, no. I learned from every game. I think if you’re working in a big company you are really lucky. Making games is really complicated, and Papo y Yo is a collection of everything I learned at EA. From mechanics to game design to team management to business, it was a great school.

DS: With everything you learned there, how easy or hard was it to start your own studio for this game?

VC: I think that if you didn’t have the background that I had, it would have been really hard. I think my background helped others as well: they thought, “Okay, he’s done a lot of work at EA, so he’s not a fuck-up. Let’s trust him.”

DS: You said that you hated the term “game designer.” Why doesn’t that title work for you?

VC: When you put yourself only in the designer’s role you limit the possibilities. With self-publishing, you’re not a designer. You have responsibilities to the people you’re giving this entertainment to. You’re a storyteller. You’re an entertainer. Kids today are spending as much time playing video games as they are in school – so you’re a teacher! You have to take that as a responsibility. The “designer” is taking these roles away from the creators today.

DS: Can you talk briefly again about the role games played in your childhood?

VC: It actually helped me. Every time there was a difficult situation at home, when there’s an abusive person at home, you cannot count on your mother, or your brothers or your friends. Because they’re all surviving, and trying to cope with this terrible situation. Your mom can only give you a bit of help because she’s coping with it, too, as are your brothers. And they’re trying to protect each other.

But then video games was a space that I could escape to, to get away from that world, and become empowered. And it was great to kill Browser (in Super Mario Bros.), because you felt powerful.

I loved Shadow of the Colossus, too, because it gave you this immense feeling of self-confidence and power. But the negative aspect of these games is that when you drop the controller, there’s nothing you have learned.

DS: Did you base Monster on similar enemies like Bowser or the Colossi?

VC: Yeah, of course. It’s an inspiration. Monster’s sort of the evolution of Bowser. 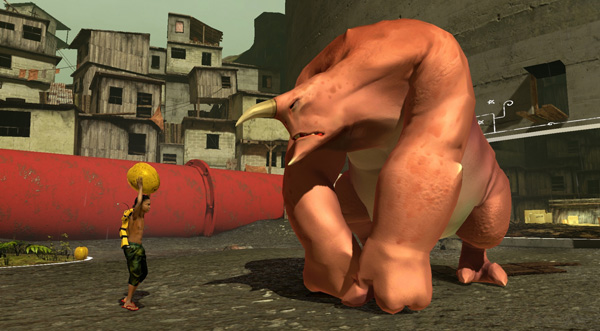 DS: During your talk you mentioned something called the “game beat chart.” Can you explain that a bit more?

VC: So, the game beat chart is the emotional beat you want people to have in the game. Movies have it, too – that’s where it came from. Movies have acts, they have a beat chart that says, “In act one these are going to be the beats that the viewers are going to experience,” and they map out this curve.

We try to do the same in games, but it never comes out because it’s linked to what I was saying about role-playing before. Role-playing is great, but you can take it out really easily.

DS: During your interview on CBC Radio’s Q, Jian Ghomeshi mentioned that he only knew how to play old games like Galaga. So there’s still this mechanical and/or psychological barrier to playing new games. What do you think can be done to help overcome the fear or misconception that they can’t play?

VC: iPad. Play The Room on iPad. It’s so amazing and so beautiful. I think that the controller limits the amount of people who can get these experiences; because you need all this dexterity to make them happen. But I think we have to change the paradigm, and not focus on challenge anymore but focus on experience and interaction. I think the touch interaction is the way to go.