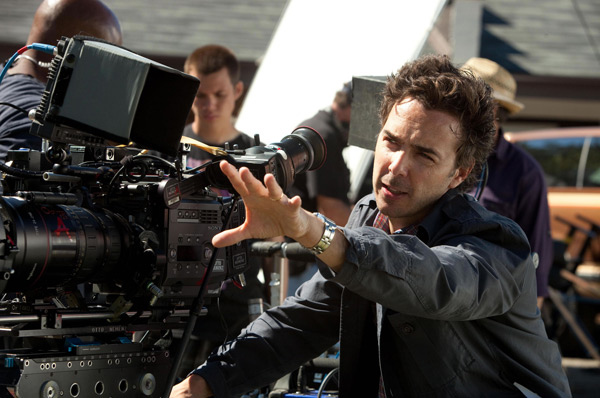 It takes a special kind of guy to take on an assignment like the family sports film Real Steel. The job has to go to someone who’s familiar with family films, someone who knows the ins and outs of sports movies, and they have to know how to bridge that gap to make the film accessible to both audiences. Combine that with the fact that it’s also a Steven Spielberg produced, special effects heavy story of a father and his estranged son competing together in the futuristic sport of “robot boxing” and the degree of difficulty goes up considerably.

After meeting with Spielberg himself, the directorial duties for last fall’s crowd pleasing Real Steel – out on DVD and Blu-ray this Tuesday – Night at the Museum and Date Night director Shawn Levy set out to make the film as a bit of a departure for himself. Filled with more dramatic weight, more visual effects, and working in a genre slightly outside of a comfort zone, Levy has gone on record numerous times as saying that the Hugh Jackman starring film has been his most satisfying experience to date.

The enthusiastic and candid Levy talked to Dork Shelf from Atlanta to talk about the DVD release of the film, including an incredibly in-depth commentary track that takes viewers through numerous featurettes and production stills using Disney’s new Second Screen technology, allowing viewers to access special features from a synched up laptop or iPad without stopping the movie on their screen. It’s like an in home film school for those who would much rather be studying the inner working and attention to detail found in genre fare.

Andrew Parker: I actually got a copy of the Blu-ray tonight, and I really have to say that this is one of the most amazingly in-depth commentary tracks I’ve heard in quite some time, and a lot of that has to do with the technology being used for it.

Shawn Levy: Thanks! It meant a lot to me because it was a fascinating process to make the movie and to learn as much as I did making it. Frankly, I remember being a film student and watching DVDs or Laserdiscs with Criterion Collection commentary and it was like a dream to get inside the process of the filmmaking and I wanted to give that to the full extent that I could on Real Steel.

AP: Now was this kind of your idea to try this Second Screen technology for the commentary track or was this something that Disney came to you with early on?

SL: They came to me when I was editing the movie and they said they had this great new technology for the future, this Second Screen technology, and they told me what it could offer fans of the movie, but that it would require a tremendous amount of work in terms of turning over behind the scenes footage and images and then for me to really walk the audience through how we made that aspect of it. I was just so intrigued by the ability to give that insightful and profound a behind the scenes look that I totally committed to it, as did my whole team, and it was amazing to be a collaborator in the shaping of it.

AP: In the commentary, your eagerness and love for the material comes across, and it also explains how in many ways you’re still a student of film and always keen to learn new things as you go along. This is your first sports movie, your first film that isn’t an outright comedy, and on top of that you’re working with technology that you haven’t had to use before. What was something that you were most comfortable with going into the film and the thing you felt you had the most to learn about?

SL: I guess the area of comfort had to do with bringing the heart to the story. And I’m used to bringing a warm-hearted quality to the comedies I directed, so I was comfortable in finding in the screenplay, the rewrites, and in the direction the moments of real humanity and warmth within an action drama. So that was comfortable for me, as well as working with actors, which will always remain my favourite part of the job.

What was newest was that I literally knew nothing about motion capture technology, and I certainly knew less than nothing about the Simulcam technology. Partly because I had never worked with it before, but also partly because half of it didn’t exist pre-Avatar. So I had to learn this entire technological paradigm from scratch, and that was daunting at first, but eventually very, very gratifying.

AP: The look of the film is something unique. It takes place in the not too distant future of 2020 and it has this really retro-forward feel to it. Was there anything you particularly looked to when trying to get the feeling right to use as a template?

SL: For the aesthetics of the film we used still images more than movies. My production designer, Tom Meyer, pulled such an eclectic group of stills from literally landscape books and photography books, boxing magazines, architecture books. You know, anywhere we saw an image that inspired us we literally created this hundred page visual manifesto, and in my first meeting with the cinematographer I shared that with him and it was very clear because it was all in those images.

AP: You’re a very collaborative filmmaker that likes to encourage everyone on the set, not just the actors, to impart their thoughts on the project. What’s something you look for in a potential collaborator when you start casting and hiring people?

AP: Which is key.

SL: Oh, it is key, but people often don’t realize it. When you look at stars that I’ve worked with, and even several that I’ve worked with repeatedly – Steve Martin, Ben Stiller, Tina Fey, Hugh – these are very, very smart, inventive, collaborative types and I want an all star team. So if you cast not just rightness for the role, but also intelligence, you’re giving yourself such strong partnerships that will just make the work better. I learned that early on working with Steve Martin and it’s a lesson that really stayed with me.

AP: And that’s a great guy to learn a lesson like that from, an old pro who’s been around for that long.

SL: Yeah, he’s a pro, but he’s also a real intellect. I’m here in Atlanta right now producing Neighbourhood Watch with Vince Vaughn and Ben Stiller, and these guys are so fast and so quick, and every day we’re in it solving problems together and figuring out the best ways to do scenes together, and I really love that brotherhood.

AP: Going back to another casting question that ties into what you were talking about before when you said you didn’t know much about motion capture technology, how did you cast the people who would play the robots in parts where you couldn’t use your practical effects or traditional CGI?

SL: My stunt coordinator and fight choreographer, Garret Warren, he selected and suggested and basically cast each robot with a professional fighter. Some were boxers, some were MMA fighters, some were stuntmen who were amateur fighters, and some of his choices were perfect, and in some of those cases, when we got in the boxing ring and it… and I don’t want to bum anyone out by naming names, but some of the robots were played by fighters who weren’t the right match. They didn’t have the swagger or the right form to their punches, so in some cases we replaced certain fighters mid-stream until we found the human fighter that had the movement and mojo that we wanted each robot to have.

AP: I imagine that would be something that’s tough to find on a production like this because you have to spend all this time meticulously designing the look of these robots before you even shoot any of the film, and you absolutely have to have that match between the look and the movement.

SL: That’s exactly right. In the case of Zeus (the champion robot of the boxing world), we had a fighter playing him and after doing one round of the fight with Atom (the hero robot), we could see that the brawn and stability and undefeatable intimidation of this character wasn’t being expressed in the right way by the human, so we changed humans.

AP: There are a lot of really big set pieces with a lot of great attention to detail in the movie. Which one posed the greatest challenge to you as a filmmaker?

SL: Well, the one I would answer with would be the one at The Zoo, and I tell this anecdote on the DVD. That fight between Atom and Metro was supposed to be on the roof of a bowling alley. We looked for months and we couldn’t find one. Then it was supposed to take place on an abandoned riverboat. We changed the scene to an abandoned riverboat and at the last minute we couldn’t get a permit to film on the water. So now we’re frantically running around wondering where the hell we’re going to have this fight. Then at the eleventh hour we found this abandoned zoo, and it became one of the defining scenes in the movie. That’s a great example of how in the midst of problem solving, and in the midst of challenge, you often come up with your best solutions.