Mouffe is about the journey rather than the objective. Emerging from the Critical Hit experimental game incubator in Montreal, the game is played with a custom controller made out of a wired blanket and projected on the ceiling of a tent while soothing music plays in the background. Players are able to lie down and relax, and there’s really not much more to it than that.

The calming presentation has made the game a hit on the festival circuit – Mouffe has appeared at Indiecade and Toronto’s Gamercamp – and now the team is hoping to expand with an Indiegogo campaign to produce a more portable version of the project. We spoke to developers Ben Swinden, Kim Hoang, and Hamish Lambert about the campaign and the past, present, and future of Mouffe, as well as the Critical Hit process that spawned the initial prototype.

You can find out more about the “Daydream Simulator” at the game’s official website. The Indiegogo campaign has already surpassed its $2,200 goal, though there’s still plenty of time to help with the travel expenses.

(The following transcript has been edited for clarity and length.) 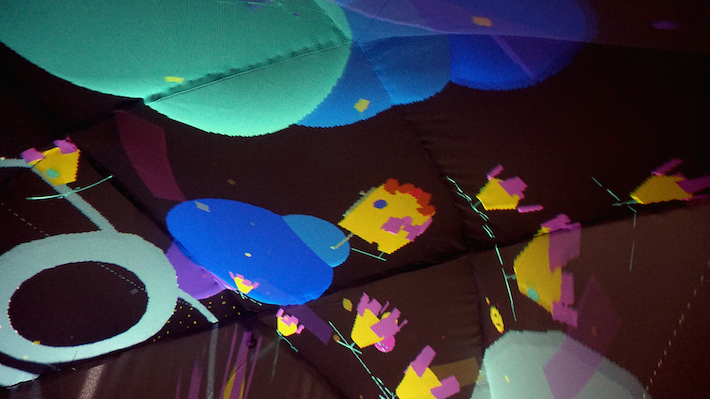 Dork Shelf: So far, you’ve only showed Mouffe at gaming exhibitions. Does that change with the Indiegogo campaign?

Ben Swinden (Programming and Art): We’re pushing the Indiegogo as more of a donation. We’re interested in keeping Mouffe as a festival centered project. We don’t really have any plans to make it commercial or marketable in any way.

Kim Hoang (Fabrication): [The campaign] makes another Mouffe setup, a smaller one that we can bring to different events, something that’s a little less unwieldy. The idea is to get it into one package that someone could just open and set up, kind of like a console.

Ben: We’ll be able to hopefully show it at a much wider range of festivals. Because currently we do have to travel with it, but we’d like to be able to just send it.

Kim: We want to take it out of the game sphere a little bit, too. We want this kind of game to show up at kids festivals or film festivals or art exhibits, and not just game and developer related events. You can make a controller out of anything. Get kids involved in the maker world and programming.

DS: Could other developers use this platform?

Ben: Somebody interested in using a blanket controller can show it through Mouffe. That was our main plan in terms of expanding the scope of the project. Kim did some talks about alternative controllers and doing more of that is pretty exciting for us.

Kim: It’s also exciting, I think, for women, in terms of making hardware. You’re making things that are already quote-unquote women’s skills like crafting and sewing and finding an electronic use for that. We’ve played around with the idea of doing events around Mouffe, like having a blanket jam where people can work in the same space as the tent. That’s how we worked on it.

It’s so different to test something inside the tent. The computer build of Mouffe is boring. It doesn’t have the graphics and feel like an interesting environment. 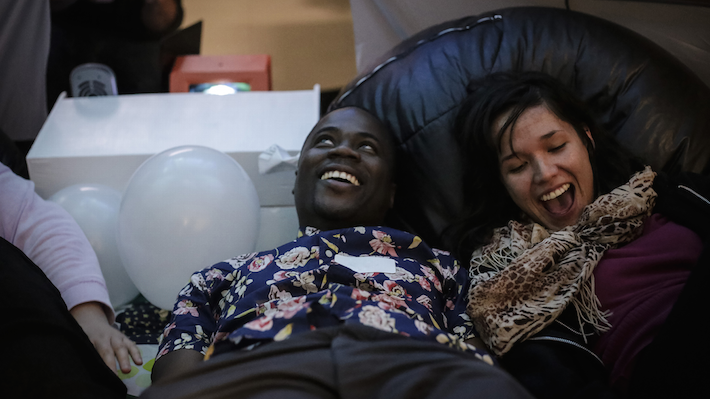 DS: What kind of reception have you received at the events you’ve attended?

Hamish Lambert (Animation and Art): Indiecade was very exciting. From the moment we set up there was a lineup of people waiting to get in, so it was really high energy. Everyone was talking and chatting and when they got in the tent they got to push all the buttons and have a blast.

Gamercamp was a little more laid back. People were just taking their time, walking around by themselves. They explore the tent and relax a little more. It was different energy, but it’s all been positive.

DS: Most games are goal oriented, whereas Mouffe is more about the experience and enjoying the space. Was that deliberate?

Ben: We were at Concordia University [the host for Critical Hit] and we had our own room because there were no classes going on.

Kim: We weren’t supposed to be there but we sort of took over.

Ben: Yeah. We had the tent set up the whole time, and that was enjoyable for us, being able to relax. The game developed around that mentality. It works for festivals because it’s appealing for organizers to have this space where people can get away. Festivals are so high energy. People enjoy being able to step out of that a little bit.

Hamish: Our development was really, really playful. We were experimenting. Everyday we were hanging out and having fun and building things and playing instruments. I think that came out in the project. People have a similar experience. There were no watchful eyes of producers or higher ups, so we got to play around.

Kim: Visitors would also use this as a sanctuary when they needed to get away. Sometimes it would become a party.

Your experience of Mouffe is so dependent on who’s in the tent with you. At Indiecade we had up to eight or nine people in the tent at one go. They want to be together and it feels safe. There are things to look at even if you don’t want to talk to anybody.

If you have a kid in the tent with you, it’s different because they’re so imaginative. They’ll start naming the different elements or coming up with a story as they go crazy mashing the buttons. The buttons are durable enough that it doesn’t matter.

DS: Do you think more developers will start making games with these kinds of alternate controllers?

Ben: It’s not like we invented it, and I think it’s becoming more popular. Games can be different, and using different controllers is a really easy way to get into that space. When you’re making a video game in something like Unity, or you’re using a controller, you tend to have jumping and guns. You just go with the things you know. But when you have something like a blanket controller, it opens your mind to different possibilities for what the game experience could be.

Kim: There were other people making soft sculptures. Lynn Hughes, a mentor at Critical Hit, does a lot of new media soft sculpture controllers. It’s not covered as much in games journalism. People sometimes care more about the next Bayonetta or whatever than they do about this kind of stuff. But it does happen. We’re not working in a vacuum.

DS: How did the incubator process contribute to the initial idea and development?

Kim: Critical Hit recruited all of us individually. One week the theme was to make weird controllers, so we made a fast and cheap prototype and that was crazy. That was the hardest week for me and Hamish. But then we got to break off into larger teams. We recruited Ben and our musician, Zach [Soares], and went from there.

We wouldn’t have known each other if not for the incubator. We had space to work and materials. They even hooked us up with the Concordia fine arts section. The blanket, some of the more intricate parts are actually embroidered by a big machine. We would never have achieved to the same extent without Critical Hit.

Hamish: The format encouraged this kind of game. Every week we were given a prompt, and two of the weeks had us developing different controllers or focusing on a sense other than vision to encourage the artists to produce different games than would come out of commercial contexts.

DS: Where does the name Mouffe come from?

Kim: During that original week, where we were trying to make this huge blanket, we had so many other things to think about that none of us wanted to think of the name. But we did need to have one for presentations. At that point Hamish said, maybe it should just be a sound that isn’t a real word. Like Moooff.

Hamish: It wasn’t a serious suggestion, but we couldn’t figure out anything else.

Kim: The original prototype was pre-tent, so we changed the name to reflect the difference in the concept. I wanted to make it sound cute and French, being in Montreal.

Hamish: The original name was M-O-O-O-F-F.

Kim: It kind of looked like Moo Off. Mouffe is a better pronunciation and made it look kind of cute. We thought we made up this word, but we’re finding out that there are lots of things named Mouffe.

Ben: I just saw a thing about a café in Japan called Mouffe Café. And there’s a famous political scientist called Chantal Mouffe that is popular on Twitter.

Hamish: When people ask us about the name, the short version is that’s the sound you make when you fall into cushions.

DS: When did the tent become a part of the project?

Hamish: In the first week, we had the blanket and we knew we wanted to project above us. With our limited time we duct-taped a giant piece of Bristol board to the ceiling, and this was the worst idea in the world.

Kim: It took so much work. It was heavier than we thought. We didn’t have a ladder. We piled chairs onto tables onto chairs. After that whole experience, we thought, never again. It would make the game inaccessible. We wanted it to travel. The tent is a pain to take around, but it’s a lot easier.

We went to look at camping stores and there were a bunch of tents on display and we decided to try it out. We all climbed in and lay down and it was like, guys. This is our game. It just felt like what it should be. That’s where the blanket was going to be housed and it changed the whole look and the experience.

DS: Sound is crucial, so what were you going for with the audio experience?

Ben: [Patatap developer] Lullatone really influenced us in terms of the mood and the feeling of the game. It used a lot of interesting acoustic instruments, like child’s xylophones and ukuleles. That was the feeling we wanted to go for. Zach spent a lot of time picking out weird instruments in toy stores.

Hamish: Un-threatening sounds from childhood that remind you of your carefree days.

Kim: The sound made it more responsive. When you touch, something would happen. The sound resonates around you and it’s instant feedback. There’s this musical quality to it, like a mobile or a kid’s toy.

Hammish: Me and Zach also have this interest in games that can be played musically, so we tried to design around that idea. If you’re just mashing buttons, it’s going to sound musical. You can start creating your own songs.

DS: Have you ever considered using a different set of sounds to create a different mood or soundscape?

Kim: The original models that Hamish made were actually sort of frightening. We were even talking about doing a horror version of Mouffe where it was really tension-filled and terrifying. Horrible looking creatures and screams and stuff. There are limitless experiences you could create.

Hopefully, in the future, that would be a direction in which we’ll develop. With the current build we don’t plan to do much more. We’d rather make different and more experiences than work on the one we already did. We already feel like that’s complete.