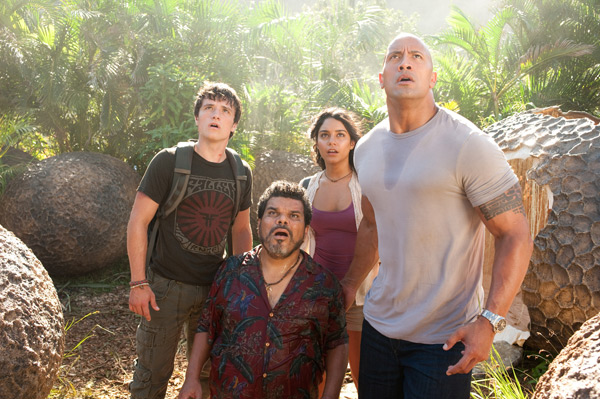 When considering whether or not you want to watch Journey 2, the only question you have to ask yourself is: “Do I desperately need to see The Rock play a ukulele and bounce berries off his pecs in 3D?” As far as I can tell, those two scenes are the only reason for the film’s existence. The rest is a hodgepodge of half-baked sci-fi ideas, cartoony CGI spectacle and sickly sweet family sentiment that should have even the most forgiving children on a sugar-high rolling their eyes in disbelief. The whole thing smacks of desperation with the filmmakers struggling to stretch a forgettable blockbuster into a franchise and a cast of recognizable actors barely trying to conceal the fact that they signed up for a well-paid tropical vacation that just happened to involve a film shoot. It feels more like a souped-up direct-to-DVD sequel than a marquee studio release.

Now, Journey to the Center of the Earth was never a great movie, but at least it delivered some breezy entertainment. With the new-fangled 3D still in it’s infancy when that flick came out, it played more like a 90-minute theme park attraction than a movie, showing off the fancy pop-out-of-the-screen technology with an seemingly endless series of set pieces that never got bogged down with concerns like telling a story or crafting memorable characters. It wasn’t great, but it was a good showcase for 3D when it was still a novelty and that’s all the movie had to be. But it’s sequel time now, and with audiences already tiring of 3D, that isn’t enough to carry a movie anymore. Nope, 3D flicks have to work on their own merits now and sadly the folks in charge somehow dreamed up an even less compelling story this time.

The movie opens John Hutcherson’s teen protagonist Sean from the last movie escaping from cops on a dirt bike clutching a stolen broadcast that he hopes is from his grandfather. You see, Sean is a Vernian, a special breed of people convinced that everything Jules Verne wrote about was fact. Given his last adventure, he has good reason to feel that way and is convinced his grandfather is stuck on Verne’s Mysterious Island. Thankfully, he’s got a new stepfather played by The Rock whose navy training gives him the necessary skills to decode the message and kick some mythical creature ass. They head off to the coordinates they were sent and meet up with Luis Guzman and teen love interest Vanessa Hudgens as the father/daughter team who takes them there via a rickety helicopter. Shockingly, they end up trapped on the island with Sean’s grandpappy Michael Caine as their guide. Cue a series of CGI set pieces involving volcanoes of gold, riding giant bees, learning lessons about connecting with parents, and for some reason finding the Nautilus from 20,000 Leagues Under The Sea.

Right off the bat, the 3D in this movie is fairly lackluster. While Journey 1 featured scenes with characters spitting into the camera every few minutes to take advantage of the new dimension, in Journey 2 it almost feels like an afterthought. Sure there are plenty of perfunctory action scenes, but they never really take advantage of 3D, which kind of seemed like the whole point of this franchise. The giant lizards and tiny elephants that populate the island are kind of fun, but honestly the trailer gives away every expensive sequence, so you can’t even count of getting some sort of minor joy or surprise there.

The cast is good in theory, they just have nothing to work with. The Rock knows how to charm and beat things up, but he’s grasping at straws with a boring, caring stepfather character. He does get to play the ukulele though, which is weird as hell to see, but it might be best to wait until the inevitable and numerous YouTube videos that will arise from the scene to catch it. Luis Guzman flails around and pulls pratfalls like a silent movie clown, while Hutcherson and Hudgens are stuck with drab pretty teen archetypes with little to no personality. Then there’s Michael Caine. You might be asking yourself, “What the shit is Michael Caine doing in Journey 2?” Well, he claims it’s for his grandkids, but this movie was shot in Hawaii and I’m sure that Caine had a nice relaxing time because he certainly wasn’t burdened with much acting to worry about.

So, as you probably worked out by now, Journey 2: The Mysterious Island is a bad movie. There’s really nothing in here you haven’t seen done better before and even Dwayne Johnson has a healthy list of movies on his resume that are better than this (and yes, that includes The Tooth Fairy). To be fair, this movie is for children and I suppose that if you’re taking along a youngster who hasn’t seen many adventure movies or isn’t exhausted with 3D, the little tike could have a good time. The kid would probably have a better time with 80s family cheese like The Goonies, but that wouldn’t get him out of the house, so I can sympathize. Just bring along a pillow for yourself. You’re going to need it.