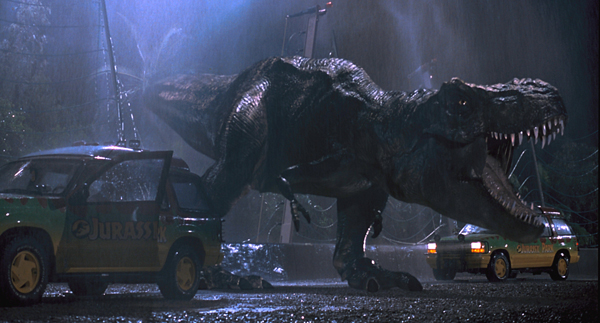 In the interim between Steven Spielberg’s E.T. and James Cameron’s Titanic, the most financially successful film of all time was also one of the unequivocally greatest thrill rides in cinematic history. Spielberg’s Jurassic Park, based on the megahit novel by prolific science fiction author Michael Crichton, is possibly the best popcorn movie fodder audiences could have ever asked for and one of the already iconic director’s most cherished and assured efforts.

Twenty years on now and the film doesn’t feel like it’s aged a day. It’s just as exciting and stirring as the day it came out when I was in my early teens and seated almost near the front of the theatre. I remember it well. I was seated near the very front of the theatre not only because it was the film’s opening weekend and it was sold our practically days in advance, but because I wanted the dinosaurs to tower over me. I wasn’t disappointed, and for the re-release of the film, this time in 3-D, it was an experience I purposely replicated (although not AS far forward as before), and it was like being transported back to 1993 all over again in spite of the modern technology.

In case you were living on a deserted island for the last twenty years, Jurassic Park tells the story of a child fearing dinosaur expert (Sam Neill), a paleobotanist (Laura Dern), and a chaos theory mathematician with a penchant for every so slightly opened leather jackets and round the clock sunglasses (Jeff Goldblum) who are invited to the remote island of Isla Nubar off the coast of Costa Rica by wealthy magnate John Hammond (Richard Attenborough). Hammond wants the trio to sign off on his latest idea: a theme park built around actual living dinosaurs cloned from preserved DNA. When a greedy, undervalued employee (Wayne Knight) decides to attempt a theft of some of the dino embryos and shuts down all the security overrides to do it, all hell breaks loose. And honestly why are you reading this paragraph because if you haven’t seen this movie you should just stop reading this and go see it.

Jurassic Park is exactly the kind of film that Spielberg does better than anyone. Much like Jaws, Minority Report, and E.T., he’s always been a filmmaker that defers to his screenwriters first before having some fun of his own. The opening scenes of these films pack a huge punch before settling into a groove to actually do what all great science fiction and fantasy should do right out of the gate: he establishes a universe with a tangible set of ground rules. Within that set-up he builds the characters to a point where the audience knows exactly what they should think of them. There’s no mystery to most of the characters in a Spielberg film, which is great since it plays into his own “what you see is what you get” ethos. He’s efficient in the best possible ways when it comes to making large scale blockbusters.

But the best part of Jurassic Park – aside from the incredibly dazzling visual effects that still look top notch and seamless in ways that so few movies from the 90s have been able to age –  is that this film, when it comes time to get to the action, is positively relentless. From the first dinosaur attack that threatens Hammond’s grandchildren with only a sheet of plexiglass between them and the gaping maw of a Tyrannosaurus Rex to a climactic battle between the same dinosaur and a pair of Velociraptors there is no letting up. The characters have been solidified and the arc is set. It’s officially time to have fun scaring the living hell out of the audience.

As for the 3-D upgrade, Spielberg has said recently that he sort of conceived the film in 3-D to begin with, but that kind of sounds like a description of every 2-D production to begin with. Still, it’s easy to see why this particular upgrade was a no brainer, and quite thankfully the transformation doesn’t damage the film in the slightest. It’s not adding a heck of a lot and it might work better on those who haven’t had the chance to see the film on the big screen yet, but it does enhance the thrill for most of the time.

Strangely the sequence that works the worst in 3-D is the heavily lauded work that was done on the scene where a pair of raptors stalk the children through a kitchen. It just doesn’t really work on the dinosaurs and it’s the only time I remember throughout the film actually noticing a ghosting effect around anything. The rest of the retrofitting, though, is shockingly solid. Digital purists might scoff at the amount of grain left in the film (which was shot on 35mm stock you young whippersnappers), but it never impedes the 3-D, marking an accomplishment in and of itself.

Also helping things along is a beefed up sound mix designed for modern auditoriums that have moved on from DTS (the preferred mix for the film’s digital release). The dinosaurs sound more ferocious and John Williams’ iconic score gives bigger chills than ever. I stop short of saying something hyperbolic along the lines of it feeling like a different film that looks like it was made for 3-D or that this is really the way it’s meant to be seen, but fans should be more than pleased with the results. On the heels of a similar tweaking to Titanic, they give further hope that this sort of thing can be used for genuine good rather than infantile, shoddily cranked out cash grabs.