If life was more like MachiaVillain, the upcoming game from Wild Factor, I’d probably be managing apartments.

There is something incredibly satisfying about resource and base management. Finding that perfect layout, discovering a perfect synergy or reaching a productive tipping point in a simulation, it can be enough to convince me that I made the wrong career choice. Maybe if things were different I’d be an overseer. You know, a property manager or a guy who designs the interior layout of drug manufacturing facilities. But, of course, those boring fantasies implode. There are never enough vampires and werewolves in serious jobs to keep my attention. But if there were more monsters in mathematics, I’d be an accountant.

Currently on the  home-stretch of its Kickstarter, MachiaVillain looks like the perfect combination of a responsible career path and classic Hallowe’en costumes. It’s a horror-themed management game in which players take on the role of an evil property owner as they build a haunted mansion room by unthinkable room, populate it with monsters, and use it to murder the hapless living. It’s like if Don Hinson put you in charge of a low rise in Amityville.

Combining resource management, base building, and real time strategy combat (with pause functions for prime personnel management opportunities), the spooky mansion sim is absolutely dripping with genre love. And the minds behind MachiaVillain know the value of horror camp. The game’s not scary, but it’s morbid. It’s a cute and culturally subversive: a cartoon game about being responsible with space and materials which also demands that you kill bankers, jocks and pot heads — saving the virgin for last like in the movies — for crafting purposes. You can make the remains of the dead into food for your tenants. Or, if you’re feeling particularly Gothic, you could combine various limbs and organs into a Frankenstein-esque abomination – MachiaVillain is the kind of strategy game that promises depth, humour, and the option to piss in God’s eye.

The major aesthetic appeal of MachiaVillain is the tried and true equation, business plus horror equals smiles and laughter. While somewhat of a niche, there is a rich tradition of the business horror comedy.  Movie like Cabin in the Woods, Shaun of the Dead, and a little start-up flick called Ghostbusters all show that organization juxtaposed with terror is a recipe for rich entertainment. With all its ghoulish construction, evil resume collecting and frightful workforce diversity management, MachiaVillain is set to hit the sub genre sweet spot. 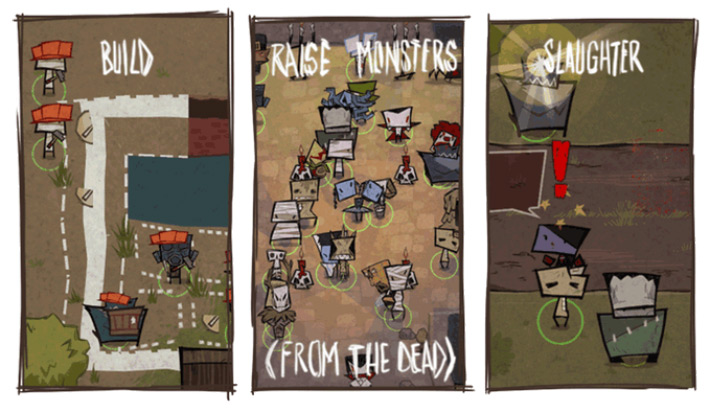 Werewolves, mummies, zombies and vampires are all counted as minions in MachiaVillain, and Wild Factor is aiming to have 30 monster types in the final game. Each fits into the game’s monster-mashy feel, illustrated in that kind of Edward Gorey meets Invader Zim style. Crowdfunding backers get an exclusive baddie inspired by Nosferatu, and contributions after a certain level get your name in the game as one of the many victims waiting to be repurposed as crafting materials, incase getting gouged by the housing market is something you aspire to bring into your gaming life too.

But for those just interested in spicing up their boring alternate career fantasies with a boat load of screams, blood and cryptids, the Kickstarter is only a couple hundred euro from reaching its goal.

Next Article »
The Ethics of High-Stakes Gaming