All bad photos by Eric Weiss

When I was a kid, I used to play a game that involved a slinky and every Lego figurine I could get my hands on. I’d drape the slinky off the side of a table and then re-enact the Sarlacc battle from Return of the Jedi, pitting the spaceman against the knight against the dude who drove the Octan truck as they tossed one another into the gaping maw of my pink Sarlacc-pit-slash-carnivorous-slinky.

The details of this game aren’t important. I assume every kid created some similar hodgepodge with the random contents of their toy chests. The point is that those battles were indicative of a certain style of play. I didn’t know who these characters were or where they came from, but I spent hours smashing them into each other because it seemed like it would be fun at the time.

I bring it up because that’s exactly what if feels like to play Lego Dimensions. The new game from Traveller’s Tales slams a bunch of worlds together with little regard for logic or consistency. It’s more structured than the games I played as a kid (partly because the video game has predetermined objectives and partly because most Lego toys are now tied to official brands), but it still manages to find an entertaining, youthful enthusiasm in the midst of the confusion.

Lego Dimensions is Warner Bros.’ response to Disney Infinity, a sprawling mash-up that collapses multiple media universes into one video game and then blends that video game with an assortment of physical toys (in this case, Lego bricks and figurines). The starter kit ships with a USB base, a Batmobile, and three figurines (Batman, Gandalf, and Wyldstyle), each with microchips that allow them to communicate with the base and the console of your choice. The characters serve as your in-game avatars, while gadgets and vehicles can be used to interact with other objects in the world.

Those gadgets and vehicles can also be upgraded, aptly demonstrating why a Lego video game is a good idea in the first place. In most games, you upgrade your car and a new decal appears on the door. In Lego Dimensions, you upgrade your car and then break the old one into component parts to rebuild it from scratch. The Lego bricks are mostly cosmetic – all of the relevant game data is stored in the microchip in the pedestal – but they add a ton of flavor and assembling the Gateway and a Batmobile will make anyone giddy. Lego has long been one of the world’s premiere toy lines, and that legacy is not in any way diminished with Lego Dimensions.

The video game, meanwhile, is split into a story mode and a series of more open-world sandboxes that correspond to the various properties licensed for the game. There are 14 in total, but only The Lego Movie, Middle Earth and Gotham-Metropolis are available out of the box. You can’t visit Scooby-Doo Land, for example, until you’ve acquired a Shaggy or Scooby figurine and placed it on your game pad, which is why I feel like I’m reviewing the financial structure as much as the gameplay.

In that regard Lego Dimensions is inescapably commercial. The robust campaign is written for Gandalf, Wyldstyle, and Batman and the starter kit has everything you need to make it through to the end. However, you are constantly aware that much of the game is tucked away behind locked doors that can only be opened by highly specific and arbitrary characters. The gated content ranges from entire levels to one-off secrets that come and go in an instant. The game is crammed with on-disc DLC that exists as a lure to convince you to purchase collectible objects.

It’s an obvious cash grab, which would be annoying if it wasn’t so damn effective.

That’s the critical paradox at the heart of Lego Dimensions. Measured strictly as a game, Lego Dimensions is mediocre, but it is exceptional as a product. It makes me want to buy more toys. I desperately and sincerely want (nay, need) to buy all of the supplemental figurines (well, except for the Ninjago ones, because what the fuck is a Ninjago), and I don’t care if that makes me part of the problem. It’s fun to have stuff, especially when that stuff is made to look like a Companion Cube or a Delorean. Lego Dimensions might be splintered across dozens of DLC kits that offer minimal gameplay value, but does the intrinsic joy of owning, collecting, and interacting with physical objects justify that fragmentation?

And honestly? Yeah, I think it does, as long as you know that’s what you’re getting into. I went and bought the Portal 2 Level Pack just to see how it changed the game, and aside from an extra level, it didn’t make Lego Dimensions significantly better or alter the way I play. The supplemental characters are superfluous in the story campaign, especially since you’ll seldom want to use more than five items. The game’s base can only hold seven and it helps to have open spots when you need to move characters around (more on that in a moment).

The upside is that I now own a Lego turret, a Lego Companion Cube, and a Lego Chell, and they’re all adorable and they make me happy. I think they’re a touch overpriced at $30 (Team Packs and Fun Packs are cheaper options), but if you’ve got some discretionary income and/or kids there are far worse things to spend your money on.

In fairness, Lego Dimensions is designed in such a way that the toys add value to the gameplay experience. The base is split into three sections. The characters you’re using will always be in one of those three sections, and many of the puzzles find clever ways to utilize that information. Some bosses can trap your character until you pick up the figurine and move it to another section. Sometimes the base changes color and asks you to move characters around to trigger status changes in the game.

The drop-in/drop-out functionality is nearly flawless, and it effectively bridges the gap between physical toy and digital technology beyond the mere presence of Lego. You can’t set up the base and then collapse into a recliner. You literally have to play with your toys in order to play Lego Dimensions, and the hands-on approach makes the user experience far more compelling.

It’s a good thing, too, because Lego Dimensions is otherwise a run-of-the mill Lego game with anarchic humor and below-average mechanics. The Batmobile handles about as well as a giraffe on a single roller skate and the combat has no depth of any kind. The vast majority of the gameplay time is spent destroying objects for the purpose of collecting cash (called Studs), a practice that becomes repetitive before the end of the second level.

Lego Dimensions is also awful at communication. Objectives are often wildly unclear, leading to a lot of frustrating moments in which you run in circles avoiding attacks with no real notion about how to proceed. The cluttered scenery makes it tough to distinguish between bricks you can destroy and background bricks that are there to trick you, and the fixed camera rarely guides your focus to things that actually need your attention.

Fortunately, I’m inclined to be forgiving because the game itself is forgiving within those parameters. It’s pretty much impossible to die so you have plenty of time to figure things out, and Lego Dimensions does get better later on once the full suite of tools is available and you get used to the systems. Most players will proceed at a decent clip, which allows the game to remain fun instead of tedious.

That’s ultimately why I can’t be too critical. Lego Dimensions is a light, accessible game, and it feels like most of the development energy was used to integrate the digital and physical components. Since that’s the one thing the game unquestionably does well – as well as the thing that makes it feel different – I won’t argue with those priorities. Lego Dimensions does what it needs to do well enough to allow the humor and the Lego stylings to come to the fore. 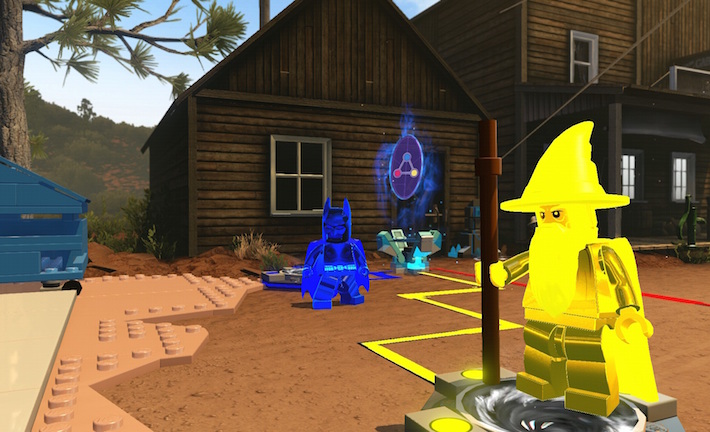 As for the rest, the premise is used to good effect with cut scenes that are genuinely funny and some truly inspired crossover appearances (I’m not sure what GLaDOS is doing in a kids’ game, but she completely steals the show whenever she turns up). There is an overarching plot about a megalomaniac (Lord Vortech) working on a scheme to collapse universes or some such nonsense, but the story isn’t all that memorable. The true spirit of the game rests with those slinky Sarlacc sessions I created in my bedroom when I was ten. It’s a cross-fiction fever dream from a child’s imagination brought to life with an A-List cast that matches the voices you used to hear in your head while playing make believe.

Is that enough to justify the $100 price tag, especially when you know the final tally is likely to be much higher? That depends on your own financial situation. All I can say is that Lego Dimensions is precisely what you’d expect it to be. It’s a relatively unique, kid-friendly toy box that encourages you to interact with tangible objects in the context of a video game. I wouldn’t buy every kit, but picking up one or two favorites seems perfectly reasonable. I had fun and I’ll probably keep playing. Beyond that, it’s up you to make your own purchasing decisions.

But just FYI –  I will be making use of this if I ever need to feed Lego figurines to a Sarlacc pit from Tron.