Taking a seat in the sidecar conference room of TIFF’s Filmmaker’s Lounge, members of the press in the first three rows are handed thick, black, weighted laser pointers. Taking some time to dick around with the red beams of light, swivelling in the air, tracing the legs of the chair in front of them, some members catch on that the tiny red specks have an influence on the screen left of the stage.

On the projected screen is a jigsaw puzzle that, when assembled, will form the logo of John Sear and Adam Russel’s outfit, wallFour. And by god’s will some attendees will try, but even in the camaraderie of other press and tecchies, efforts to tug the pieces into place, some members quietly use their pointers in the name of hooliganism, launching parts as far from their suitable destination in the name of virtual anarchy. It’s a team v. thorn behaviour Russel and Sear noticed in their initial test runs, private demonstrations with mostly friends, fascinated them, and resolved for the feature-length version of their experiment, Renga.

Both heralding from the U.K., Sear and Russel look like best friends forever. They have both similar interests and statures, Russel shattering the mirror image with an undercut. They both have histories with notable gaming outfits, though with radically different starting points. Sear’s background is in computer science, as an adult working for Codemasters though he promises that he had been programming since a “very young age” — he guesses as early as four years old. Russel, however, studied philosophy, hoping to work within A.I. research. Russel also worked within the game industry, scripting non-playable character behaviour in Fable for Lionhead Studios. Sear left Codemasters after fatigue for the industry, joining the speaker’s circuit and eventually meeting Russel. The two of them taught at the University of Derby until 2011, when they decided to hit the road with an uncanny idea.

Related link: The Renga Reaction in tweets and screenshots

“We started out with the premise that we wanted to bring games to people in real spaces,” says Sear. “There isn’t really anything like that in the games industry, to get together hundreds, or even tens of people together to play a collaborative experience.” While you can find plenty of innovation on the gaming convention circuit, a few points of inspiration stand out for the Sear and Russel — most notably a nomadic programming outfit aptly named Projectorgames. The project would outfit a projector with 40 to 50 PlayStation 2 controllers, throwing block party bash mods of Bomberman and Frogger (neither of which game would last very long, a few minutes max).

Sear was fond of Projectorgames’ Frogger. “It became an interesting transition,” he says, “from everyone being interested about their own frog to getting behind the last surviving player.” Both Sear and Russel really liked the energy, atmosphere and output that they saw, but were discouraged by the “teenage boy” domination within the attendance.

On the flipside, the kind of interactive experiences currently implemented in many multiplexes (the pre-shows before a film begins) leave the two with a lot to desire as well. Neither enjoys the hokey performative nature of it; having everyone leaning to control as a whole audience is goofier than engaging. They find it limiting and stunted, not taking everyone into account. “It basically takes an average,” says Russel, “(We want) something to get their teeth into, something that gives them a lot to think about.” With wallFour, he wanted to make something to hold people’s attention for at least an hour. 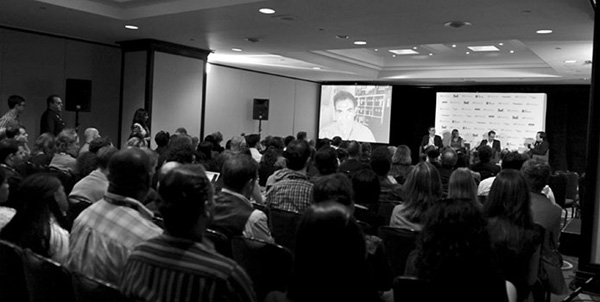 Renga, the crown jewel of the laser pointer-based wallFour system, is more intensive than a jigsaw puzzle, and much tougher for saboteurs to bomb. Somewhere in between a tower defence game and Asteroids, the objective is to build a spacecraft with ample defences to survive gravitating foes, while also able to harvest resources, or “quads,” to suit up.

The game begins with some decompression: audiences are shown the ship, its harvesters, how to use them, how to unlock quads and how to deal with  baddies thrown at them. This tutorial also teaches the audience that they will be messed with, asking them to move across the speed they’ll never achieve, and pairing them up against the final boss, Renga, long before being prepared for the R-Type style onslaught.

Sometimes there are trolls amongst the audience. At time it could mean dealing with lewd commanders (the two also took some notches out of a gentleman directing all the “guys to defend while woman harvest”) but, as for basic trolls and griefers, Renga is two steps ahead of lone fiends trying to throw the game in a tizzy. “Nothing can be activated through one person’s actions,” says Russel. Most of the game is played by committee. Ships, harvesters and quads will only move under the guidance of multiple players, enemies can only be beaten after having all their weak points simultaneously targeted, and the construction phase, in particular, is critical. New grids of the ship’s wall, which can assimilate new parts, pop in wherever the bulk of players are pointing their significant red dot. It’s the two’s favourite part to watch. “There’s a canvas for the audience to paint,” says Russel. “That’s really where the strategy comes in,” says Sear.

Right now, the game accommodates 100 active laser pointers, but theatres can be filled with upwards of 1,000 people if patrons learn to share. The game’s sobering, floating space score by Kevin MacLeod (which reminded me of Red Dwarf, a favourite of both Sear and Russel), is usually drowned out by the communal yelling of the crowd. “KEEP THE HARVESTERS CLOSE” was a common one, after it was realized that grids could be drawn in instead of letting harvesters drift into murky waters. “Big red sonnavabitch” was yelled baitlessly, as one of the more imposing, aggressive enemies flanked in from the upper right. It feels a lot like a board game, in ways, which neither programmers are surprised about, saying fandom for German tabletop games is rampant among game designers. Russel can reminisce about Peter Molyneux’s weekly game nights at his homestead.

Part of the performance itself, Sear and Russel are phantoms under the stage, tinkering away on traps and tricks. Unbeknownst to the audience, Renga is not entirely pre-programmed. The two designers watch over the audience, modifying the game to suit their observations, making Renga harder or softer on the crowd. The two can also use the game’s voice, a robotic speaker that they’ll use to mock the crowd’s follies (or the city they live in).

Russel recalls one occasion in Sheffield when a woman tasked herself to lead the pack, climbing to the front of the stage to physically direct pointers with her arms. Renga’s cold synthetic voice told the crowd that they “do not need to listen to this woman.” The two programmers would have felt guilty about taking her down a notch, if they didn’t know the woman personally.

Touring Renga around theatres and festivals has made Sear and Russel feel like the Lumiere Brothers, an industrious pair globetrotting in the name of selling their innovation. There are two more proposed steps for wallFour: the first is making Renga “look fantastic.” As it stands, Renga looks more like Robotron than a game of tomorrow, and previous drafts were composed of pixels and Star Wars j-pegs. Sear and Russel admit that art is not their forte.

The step after that is a little more ambitious. Sear and Russel don’t just see a future for Renga, they see a world of potential for the wallFour system itself: something to license to theater owners and open the floodgates for more programmers to create wildly different titles than what they would imagine. In a cinema, the two envision a crossover hit, young and old, plugged in and offline, something that appeals to gamers or restless patrons looking for “alternative evening entertainment.”

“People are willing to do crazy things they wouldn’t normally do as long as you make them feel secure enough,” says Russel, “cinemas are a great environment for that. People who are not gamers have players inside them waiting to come out.”