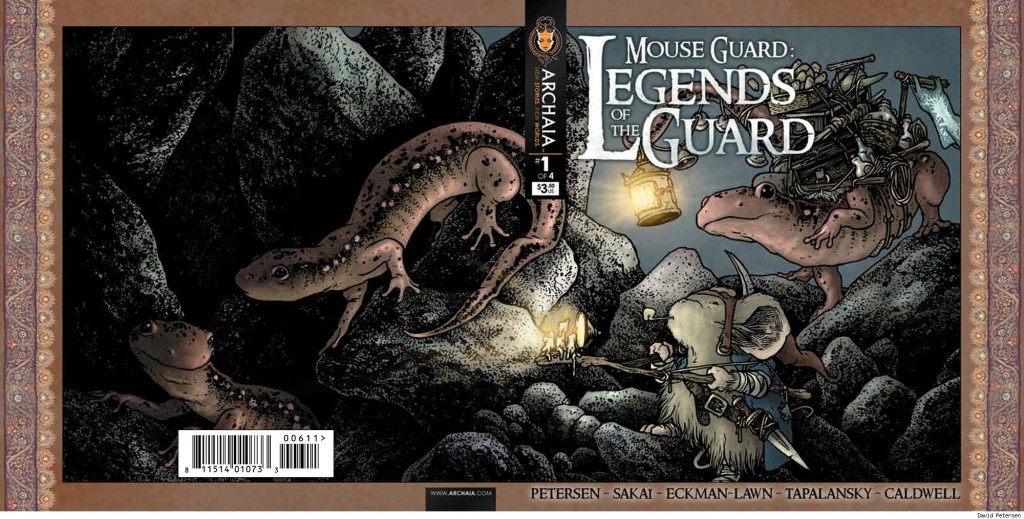 What tall tales mice can tell.

The Eisner Award-winning series Mouse Guard: Legends of the Guard returns with a second volume, filled with stories from an impressive list of creators. Issue #1 features tales from Stan Sakai (Usagi Yojimbo), Ben Caldwell (The Dare Detectives!), and Nick Tapalansky (illustrated by Alex Eckman-Lawn, Tapalansky’s co-collaborator on The Awakening), with more to come from the likes of Bill Willingham (Fables) and C.P.Wilson III (Stuff of Legend). With such an impressive set of credits, and after speaking with Mouse Guard creator David Petersen about Legends in May, I was excited to see what the first issue held. It did not disappoint.

Once again, the mice have gathered at the June Alley Inn to share their yarns and try to win the prize: having their debts at the Inn erased. Every story is unique, both in terms of plot and art, spanning genre and geography, but are held together by Petersen’s interlude pages set at the Inn. After every story, the patrons at June Alley share their skepticism of each other’s tales but always respectfully— they know more incredulous things than these have happened to the Mouse Guard while on patrol. Stan Sakai’s contribution is gorgeous and starts off silently, with only visuals as a narrative. When characters do speak, it’s eloquent and to the point. The protagonist in Sakai’s tale is only a hero incidentally; their motives are far from pure. It’s a great start to LotG Vol. 2, and Tapalansky ups the ante with his story.

Through Tiernan the Brave, a new character in the series but one the Inn’s patrons seem familiar with, readers are treated to a glimpse of the world beyond the Mouse Guard’s territories. Eckman-Lawn’s artwork shines at illustrating the magnitude of Tiernan’s adventures: he learns there are other guardians in the world, besides mice. It’s a terrific moment for fans of the Guard, and an optimistic ideal that animals all over the globe have honourable systems in place to protect innocents, and each other, from harm. Although Sakai’s visuals were stunning, I found the underlying message in Tapalansky’s story to be the most memorable, making this my favourite so far.

Caldwell’s contribution to LotG Vol. 2 is in no way a disappointment, but it takes a more comical tone than the rest and ends the issue rather abruptly without a recap back at the Inn. Caldwell’s art is colourful and fun, the same style that makes The Dare Detectives! so great, and is well suited to showcase the quirky misadventures of two young mice in the woods. That being said, after the thought provoking story of Tiernan, the sillier tone didn’t jive with me as much as it might have if the two stories had been ordered in reverse.

Overall, Legends of the Guard Vol. 2 #1 is a great read with stunning art: a standalone issue perfect for those new to the Guard and an excellent addition to fans’ collections.

Mouse Guard: Legends of the Guard Vol. 2 #1 is out June 26th at your local comic book store.