As part of National Streaming Day (who knew that was a thing?), Disney+ announced that a new original Muppets series titled Muppets Now will launch on the service on July 31st.

The press release is vague on the details, but it looks like this series will focus on the Muppets doing what Muppets do best: putting on a show. What’s new this time is that this show will be presented in an “unscripted” format. Expect classic characters like Kermit, Piggy, and Scooter, plenty of tomfoolery, and of course, celebrity guests. 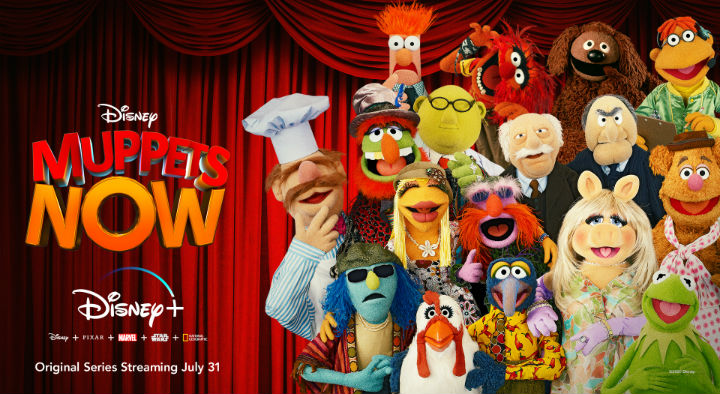 Sorry if I sound like a brat, but I want my Muppet fix right now! I don’t want to wait until the dog days of summer. Growing up, I was hooked Sesame Street and The Muppet Show, and to this day, Kermit and the gang’s bonkers hijinks never fails to put a smile on my face. Given the state of 2020, Jim Henson’s silly little creations have sparked a lot of joy for me during some pretty darker days.

The Muppets are my cure for beating the COVID-19 blues. I’ve spent my weekends kicking back and rewatching classic Muppet movies like The Muppets Take Manhattan and The Great Muppet Caper. And let me tell you, they both hold up. On weeknights, I go on YouTube deep dives, amazed by the celebrity guests and incredible musical performances on the original The Muppet Show.

Check out all of these sick burns.

Since getting Disney+ I’ve gone back and rewatched The Muppets short-lived 2015 series The Muppets – a workplace comedy shot like The Office in a confessional documentary style. The Muppets is a “grittier” reimagining of the classic show that saddled Kermit and the crew with real-world problems. Audiences at the time weren’t down for the program’s modern reimagining of The Muppet Show’s classic premise, and the program only ran for one season.

Look, I won’t lie. I’m in the bag for anything Muppets-related. So I’m extra-pumped to hear about Muppets Now. Six episodes do not sound like enough episodes to me, but it’s better than nothing. The five-year wait between series has been excruciating for a Muppet diehard like me. So on July 31st there is only one place where you will find me. On the couch, in front of the TV, with a big silly grin on my face because The Muppets are my medicine for melancholy.

“Muppets Now” is The Muppets Studio’s first original series for Disney+. In the six-episode season, Scooter rushes to make his delivery deadlines and upload the brand-new Muppet series for streaming. They are due now, and he’ll need to navigate whatever obstacles, distractions, and complications the rest of the Muppet gang throws at him.

Overflowing with spontaneous lunacy, surprising guest stars and more frogs, pigs, bears (and whatevers) than legally allowed, the Muppets cut loose in “Muppets Now” with the kind of startling silliness and heartfelt fun that first made them famous.