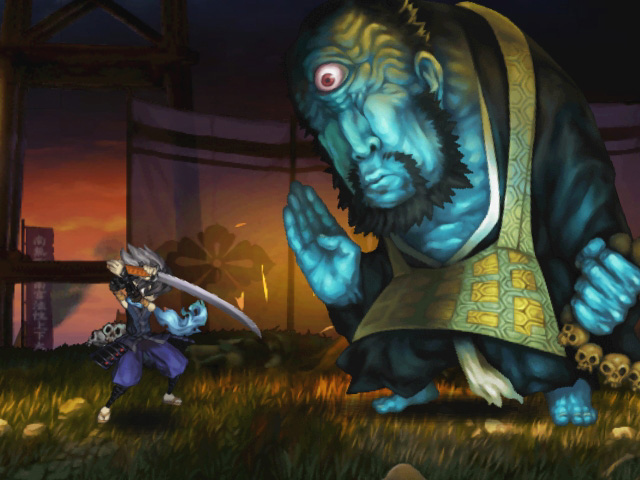 Zack Kotzer of the arts and culture zine Steel Bananas joins us for a guest review of the Wii sidescroller Muramasa: The Demon Blade.

It’s hibernation over the summer worried Wii owners, but creative third party titles have once again awaken and shall reward the brave open minded enough to try them. I was ntroduced to Muramasa:The Demon Blade a while ago, stunning screen shots tantalized us with a flowing 2D art style that could humble Braid’s. Though like all attractive things a nerd stares at from the other end of the room it worried me that while pretty, the gorgeous thing could also be vapid, shallow and not at all interested in me buying it drinks.  So after finally getting my hands on the title, it was time to pass judgement.  Would Muramasa be a most glimmering gem or another goddamn Debra?  I think her name was Debra. I hope you’re reading this, Debra.

Muramasa has you take control of one of two video game archetypes, Momohime, a sword wielding princess who’s as noble as she is whiny, and Kisuke, a spiky haired ninja who, surprise, has lost his memory. While both campaigns never dramatically intersect, they take place on the same map traversing on different paths. You get the feeling that somewhere behind these two 2D cutouts are mildly interesting stories. Interesting stories told very poorly. As Kisuke you begin to discover you had accidentally began an inter-mythological war and totally stalk the warrior maiden who tickles your steel all around the Japan’s territories. As Momohime, you are actually NOT Momohime, but in fact a renegade swordsman’s spirit possessing her for one last shot at claiming a powerful sword. Or at least I think those are the stories. It all seems riddled with gaps, like the writers got bored and messed around with a hole punch instead of playing solitaire.  There are no cinematics and nothing that tries to replace them, just a character shocked to tell you about what just happened between the loading screen and the dialogue bubble. Characters also get introduced in bulk, and folklore that the plot hinges on is never introduced at all, half way through your mind will start treating the whole affair as some twisted reverse Mad Lib.

As for the gameplay, there is less ambiguity, or at least the separation between the praises and problems is more concrete. The way you play is best described as “Castlevania-esque”. You sidescroll along blocks of map from point A to point B, facing RPG style random encounters with hordes of enemies in between grand boss fights. Unlike Castlevania there are two different play modes the game switches between. Momohime and Kisuke play the same, but for both there is a fighting mode and a… Not fighting mode. During fight mode you can use counters, dashes, dodges, air attacks, sword specific specials until your screen looks like you barfed up a bunch of pastels onto a cherry blossom tree. The fighting is satisfying, and hits that sweet spot between control and chaos. As frantic as things look on screen it never feels like it’s on autopilot. Some enemies need to be taken out in specific ways, but the bulk of them will keel over after an onslaught of unadulterated slashing. The non-attack mode is when things start to meander. The scenery is stunning and beautiful, for sure, but when the same background is reused four blocks at a time, it begins to saturate. The game is pretty shameless in reusing backgrounds, add to that the RPG style random encounters and you can go more than a few screens of just holding forward. The enemies also suffer similar repetition, while there is variety they always come in the same bundles which tire by the seventh or eighth time in a row.

Muramasa stands out from the pack with delightful aesthetics, the background art could be my wallpaper any day of the week and some of the music tracks are so catchy that you’ll be torn to move onto the next loading screen. But the gameplay lacks a careful pacing, and even the most beautiful artwork gathers dust. This slasher suffers from an abundance of lingering detours, even if they are the scenic routes.