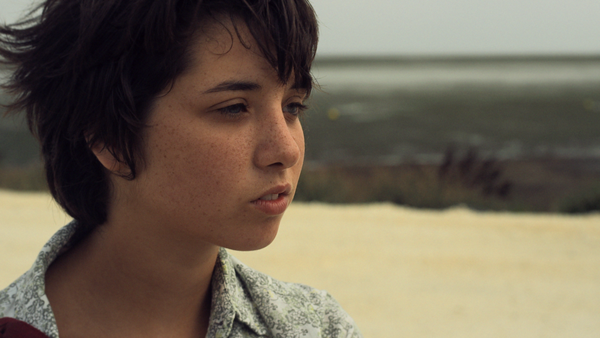 In director Shalimar Preuss’ debut feature My Blue-Eyed Kid (Ma belle gosse), 17 year old Maden (Lou Aziosmanoff) sullenly makes her way through a summertime vacation in a seaside town with her divorced, and seemingly somewhat estranged father, her brother Vadim, and her cousins. She’s rarely ever wants to do anything, but she gets through the days writing letters to a 34 year old pen pal that’s incarcerated in a nearby penitentiary.

That’s all there is in the way of any sort of plot, but Preuss’ main focus on the sometimes painfully awkward feelings of youthful infatuation and obsession doesn’t need much more explanation. While it’s never abundantly clear if Maden genuinely has affections for her letter writing friend or if her connection is something more akin to a close friendship borne from the need to feel important to someone, it serves as an underlining to the fractured relationship to her father. It’s quite a realistic portrait of estrangement. Not only does Maden seem genuinely uncomfortable and disinterested with her cousins (really only ever speaking to Vadim, and even then only in small doses), but her father’s impatience with what he has to see as a last ditch effort to communicate with his kids doesn’t help matters any.

In a tense, but darkly humourous segment in a film full of purposefully halting moments, Maden’s father gets frustrated and gives up on trying to teach her how to drive a car with a standard transmission after only a few minutes. He’s the type of parent who will act nice to their child’s face, but if everyone else around him perceives there to be a problem, he’ll also be the first person to put her down behind her back. It’s this kind of give and take that Preuss’ handles quite subtly to make it easy for viewers to understand Maden’s need for a sense of belonging and to be wanted by someone in any capacity; even by a complete stranger.

Preuss commands a kind of freewheeling style that at first seems like it would be building to a pretty straightforward conclusion, but in the most delightful thing about an already imminently likeable film, it ultimately leads to not one, but two unexpected places that equally suggest that the younger members of this family have a capacity for remarkable levelheadedness when they want to. It’s a film that definitely showcases how teenagers have far more logical and emotional intelligence than adults tend to give them credit for. Even when Maden’s cousins discover her correspondence, while their natural reaction is to snicker and gossip, their ultimate confronting of her with their worries and thoughts is refreshingly devoid of bullshit. It proves that even the most serious seeming of situations can be handled gracefully by a generation generally thought of as always resorting to histrionics to get their points across. It’s certainly a breath of fresh air.

Also screening alongside the main feature are a pair of films that depict a different sort of seaside existence, taking place in the decidedly colder Canadian Maritimes, with both also from female filmmakers. Cape Breton filmmaker Ashley McKenzie’s 15 minute short Stray follows a 9 year old girl’s journey through a harsh, cold looking industrial town in search of something beautiful.

On the older end of the spectrum, but no less harsh and cold looking, is the hour long Canadian-Mexican co-production Fogo from Yulene Olaizola, a drama following some old salts on a rapidly inhospitable growing island in northern Newfoundland. Down to their last brews and a few rotten potatoes, these men devoted to a hardscrabble life are faced with a choice when their run down community is mere days away from a final evacuation of all residents before the land gives way completely to becoming part of the tundra. An intimate and heart wrenching look at the inability for some people to refuse to give up their cultural identities, Fogo is certainly mournful, but it comes with a great deal of inner strength and wonderful performances. It’s easy to see why it was selected to play the prestigious Directors’ Fortnight at Cannes this year.

It all adds up to an incredible value (because, you know, it’s free), with three films worth checking out that viewers most likely won’t have another chance to sit down with any time soon.