Sure, we could talk about casting news, the Sundance Film Festival, or any number of awards season rumours, but who wants to do that when Star Wars Episode VII has found its director? In a move that is certain to divide the dorks of the world, Disney is reportedly in negotiations with J.J. Abrams (Super 8, Star Trek) to direct Episode VII, due out in 2015. We hope you like your Star Wars with a healthy serving of lens flare!

Many consider giving the guy in charge of Star Trek control of the Star Wars franchise akin to crossing the geek streams. As any self-respecting fan boy or fan girl knows, despite sharing half their respective titles the two properties couldn’t be more different. So why should the same guy be given control of both? Who knows?! But don’t worry, Abrams has always considered himself more of a Star Wars guy anyways, and as long as he avoids my list of “Abrams-isms” Star Wars will be just fine.

Perhaps helming Star Trek was all part of Abrams’ very long and complex plan to take control of a galaxy far, far away one day. With the 2015 release date looming, the director will likely get right to work on Episode VII after finishing with the upcoming Star Trek Into Darkness. Thanks to Abrams involvement in both franchises, we may soon finally be able to answer the age old question of which is better: Star Trek or Star Wars? – Will Perkins

Publisher THQ’s major properties were auctioned off this week, its signature titles and franchises sold to the highest bidders. THQ declared Chapter 11 bankruptcy last November, having defaulted on a $50 million loan from Wells Fargo.

Some highlights from the auction: Sega bought Vancouver-based Relic Entertainment (Dawn of War, Company of Heroes) for $26 million; Koch Media bought Volition (Saint’s Row) for $22.3 million and Metro – including the upcoming Metro: Last Light – for $5.8 million; and Ubisoft acquired THQ Montreal as well as South Park: The Stick of Truth for a total of $5.7 million.

Some major franchises didn’t make it past the auction block, although Platinum Games has expressed interest in Darksiders, according to Polygon.

Nintendo fans exploded in joy thanks to a bevy of announcements from a Nintendo Direct live press conference on Wednesday. The Wii U’s version of the Virtual Console led the headlines, with a promotional sale that includes one game released per month until July, beginning with Balloon Fight.

Other big Nintendo news included an upcoming open-world Legend of Zelda game; a separate release of The Legend of Zelda: Wind Waker remastered in HD; a very Xenogears-ish game by Monolith Soft and an impossibly adorable Yoshi game in the style of Kirby’s Epic Yarn.

Clearly, 2012 was a stellar year for Canadian game devs, as recognition for their outstanding work continues pouring in.

This week it’s the nominees for the 13th annual Game Developers’ Choice Awards were announced on Thursday. Toronto dev Queasy Games received nods for its acclaimed musical platformer Sound Shapes. But it wasn’t the only Canadian studio to shine — other national nominees include Ubisoft Montreal’s Assassin’s Creed III and Far Cry 3, Bioware’s Mass Effect 3, Mark of the Ninja from Klei Entertainment and Fez from Polytron. – Jonathan Ore

Created in 2010 by writer Cullen Bunn and artist Brian Hurtt, The Sixth Gun is set in the darkest days of the Civil War, mixing cutthroat cowboys with the supernatural, including the deadliest of weapons — the Sixth Gun. Originally slated to be a Syfy miniseries in 2011, NBC’s The Sixth Gun boasts Carlton Cuse (Lost) as showrunner with Ryan Cundal adapting it for the small screen. With nine other pilots also on order by the network, let’s hope this series makes it to their screens (unlike Locke & Key, Aquaman and many others that didn’t make the cut).

Rob Liefeld releases sample pages and casting picks for Icons, his screenplay about the rise of Image Comics 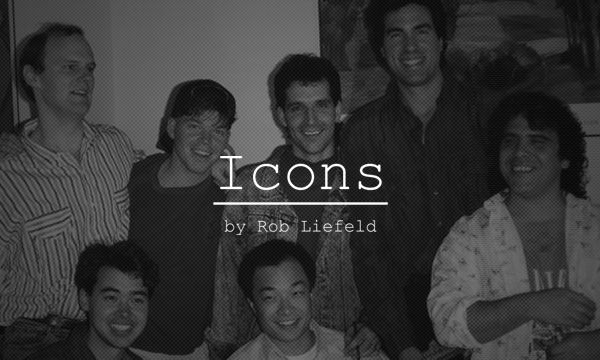 Controversial comic book figure Rob Liefeld released several sample pages from his Image Comics screenplay Icons this week. The story of a publishing company founded on — and now well-known for — championing creator-owned titles (The Walking Dead, Spawn et al.) would undoubtedly make a great film. It would give fans an insider view into the early days at Image, featuring creative giants like Todd McFarlane, Rob Liefeld and Jim Lee, to name a few.

However, considering Liefeld’s notoriety for becoming unhinged at times (leading MTV Geek to ask if he was the Charlie Sheen of Comics), how accurate this portrayal of the Image story is up for debate. His casting choices are interesting, though, if a bit flattering/insulting at times.

Though Mark Waid’s thoughts on why some creators still oppose digital comics are interesting, his inclusion in the Massive Online Open Course (MOOC) on Gender Through Comic Books is the real news.

He and other comic greats like Terry Moore, Scott Snyder and Stan Lee (who voices the course trailer) have contributed to the curriculum of this amazing course led by Christina Blanch of Ball State University. It’s free to enroll, but may require purchasing course materials if you don’t already own the comics. I’ve signed up, what are you waiting for?

Francesco Francavilla signs on for two issues of Hawkeye in April

Matt Fraction’s wildly successful reboot of Hawkeye features covers by David Aja and interiors by Aja, Javior Pulido and others. Fresh off his 2012 Eisner win for Best Cover Artist and newly released ongoing Black Beetle series for Dark Horse, Francesco Francavilla will be drawing issue #10 and #12 on Hawkguy. Francavilla’s art is well-suited for the stylish Hawkeye title, something the book’s editor, Stephen Wacker, noted in his statement accompanying Marvel’s announcement. “Though he’s only on the series for issues #10 and #12, Francesco is going to leave his mark on Clint with some of the most beautiful art you’ll see all year!” – Nicole Rodrigues