I’ve heard before that “prison changes people” but I always attributed that statement to the prisoners, not the guards and staff. Orange Is the New Black shows us how everyone behind the gates at Litchfield is subject to array of life changing events from positive to absolutely tragic. Some are worn down to a nub and like Caputo, who tells Bayley, “Working here changes you” and to GTFO while he still can. Even Healy’s had enough and checks himself into a mental institution.

“The Animals” shows us how many—if not all — at Litchfield have been indelibly changed by their time there. 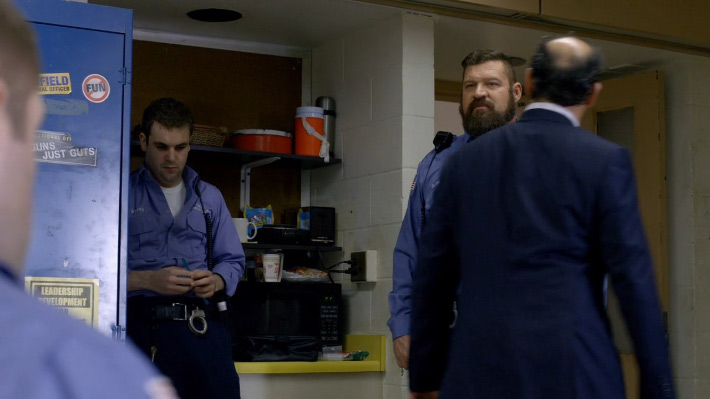 In a flashback, 18-year-old Bayley and his friends climb the water tower that overlooks the prison. They remark how it bears resemblance to the high school from which they just graduated. Young Bayley with his youthful stupidity has no idea he’ll be working at this institution in the very new future. In a moment of foreshadowing, we see him and his friends throw eggs at the then inmates doing yard work outside the prison, he hits Frieda square on the back, she screams at the punk, “I’M A HUMAN BEING!”

Bayley tells Caputo about how Humphrey forced Suzanne and Maureen to fight, and how “disturbed” he was by this incident. Then again, he was too afraid to go against the other guards and stop it. Despite his conscience eating away at him, it’s Suzanne who is the most disturbed—she’s literally catatonic.

Like in most of his life, impotent rage is spewed from the mustachioed mouth of Joe Caputo. He tells Humphrey he is going to be suspended for a whole month without pay.

Captain Piscatella informs Joe that he will do no such thing, and if he tries to reprimand any of his guards, they will all walk off the job—and how well did that go last time?

Thought experiment: At this point wouldn’t one think that the guards like Piscatella, Humphrey, Dixon, Stratman, and McCullough walking off the job would make the prisoners feel MORE safe behind the walls of the prison?

I think so. I mean, in addition to keeping Humphrey on guard to terrorize the inmates, Piscatella is depriving Red of sleep as a punishment for having the dead guard’s keys in her possession, and generally walking around with a, “I HATE ALL Y’ALL” disposition.

“Coal Minors Daughter” aka Sankey and “Bald Eagle” aka Skinhead Helen approach Taystee and Cindy about an alliance. Don’t get them wrong—they still hate black people—but they hate Piscatella more. He’s the problem with the whole institution and they need to find a way to get him to resign.

There’s a meeting with representatives from their respective cultural backgrounds and despite their intentions to take down the administration with a peaceful protest, they can’t stop bickering amongst themselves to get their shit together.

Blanca tells Ruiz they should commence with this act of civil disobedience anyway—I mean the Dominicans do have the most bodies. Flores was on that table for what? Three days? She wants more, but Ruiz isn’t so sure.

The rumors fly amongst the prisoners about the possibility of peaceful retaliation, but who is going to start it?

“Nothin’ happened to you, you big turd.” —Tiffany “Pennsatucky” Dogget

Gloria and Burset once had a score to settle with one another, and in a tragic turn of events, things got violent and Burset was sent to the SHU. After a nun stuck a camera phone up her twat, Burset was unceremoniously discharged and sent back to Minimum Security. Gloria, as we know, feels guilty as fuck and makes amends by kicking the Dominicans out of Sophia’s salon and helping her with her wig.

There’s another couple making amends — although this time it’s romantic. Alex and Piper were brought back together by crack-fuelled confessions and have come to rely on one another as they once did. But—just throwing this out there—is this just a relationship of circumstance? Literally they would both be alone if they didn’t band back together. I give it like six months tops.

Although “she wishes” Penn was hitting on her, Boo finally forgives Pennsatucky for speaking to Coates again. Penn was once an ignorant racist, homophobic Bible Thumper, but now she’s shed her hatred, but still finds the Good Book useful in its lessons about forgiveness. She asks Boo to forgive. Explains that she forgave Coates, more for her than for him. That doesn’t stop Boo from giving Coates a good slap though, and a warning not to hurt her again. I’m so happy they’re friends again!

Speaking of happiness, Soso and Poussey dance in the time machine look to the future. Concerned for her life on the outside with her ladylove, Poussey goes to Judy King and asks her if she would give her a job when she gets out. King agrees and it looks like the two are destined for a life of love and pleasure when they are finished paying their debts to society. Right? RIGHT?! 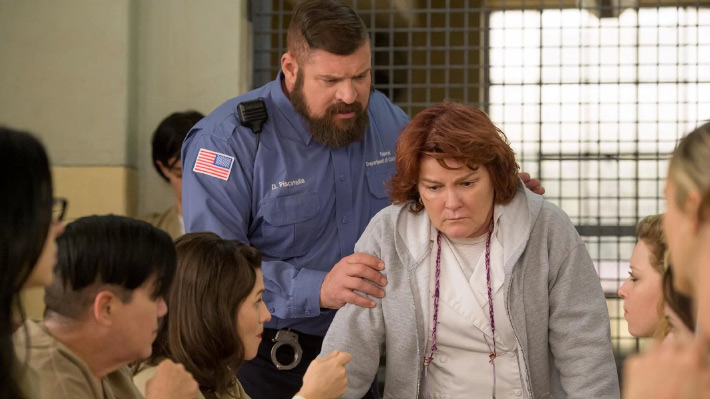 “You are criminals and you deserve nothing.” — Desi Piscatella

Someone like Pennsatucky has taken her time in prison to reflect on her past and take steps to be a better person. Someone like Caputo has taken this time to try and fight for the rights of the women prisoners only to be constantly beaten down by the administration.

Caputo once looked at Fig as an emblem of evil, but now he understands how the position of warden is to be between a rock and a shit-filled-hard place. “They broke you too huh?” she asks him when he comes knocking on her door. She tells him about the plans for more prisoners and the construction of the super dome is for more bodies. Of course there are going to be new inmates so that MCC can make more dollars. Caputo and Fig “talk” this over.

Poussey tells Soso that there’s no point to the protest, since nothing’s going to change and Soso takes this personally, how can she not believe in everything she stands for?

That is until Piscatella shoves Red to the floor to make an example of her for the rest of the inmates. This is the final straw for the abused and maligned women. They stand, one by one, on the cafeteria tables in an act of rebellion against this heinous leader.

Of course Piscatella orders the COs to tear the women down from their literal stand. Of course Suzanne is triggered by the sight of Humphrey remembering that she “did a bad thing.” Of course Poussey steps in and tries to get Suzanne to calm down. Of course Bayley is just trying to get the situation under control. Of course things go to far.

He continues to put his knee on her small frame. She cannot breathe. She tries to tell him that she cannot breathe, but fights for a breath of air. She’s 92 pounds and can’t fight him off.

When he finally gets up off of her, she lies dead on the ground.

Taystee weeps for her best friend.