Orange is the New Black Episode 4.9 Recap - That Shelf Skip to main content

Crime and punishment is as old as civilization itself. From days of old, societies have found various ways to sequester, mutilate, and even kill those deemed a threat to society.

However, these modes of punishment, like the people who enact them, have been subject to evolution—we don’t put people in the stocks anymore, for example. Some of these changes have come from a greater understanding of human rights and that knowledge undoubtedly has come from the mistreated prisoners themselves fighting for what little rights they have.

“Turn Table Turn” is an episode featuring how the new regiment at Litchfield infringes on the rights of the inmates. Some are victims to these punishments, while other decide to disobey.

The photo of Judy King and Cindy making out like teenagers has hit the celebrity news circuit. What are they going to do with all that money? Poussey’s going to take her lady to Amsterdam, Taystee’s going to follow around D’Angelo like white folks follow around the erroneously spelled Phish, Watson jokes about getting rims, and Suzanne’s going to rent a bouncy castle in the shape of a frog.

Not all are celebrating the leaked photo, Cindy’s upset Judy used her as a way to make her seem post-racial, and what is Caputo going to say about this? The repercussions might out weigh the benefits.

“You know inmates, always up to something.” — Joel Luschek

Caputo IS super pissed about this photo. Caputo promises the wrath of Khan—or rather the wrath of god, or whatever— if the two are just pretending to be lovers, and so they must keep up the façade that they are lesbians.

Piscatella orders a sweep of the prison looking for phones. The guards aren’t too happy about going though all the nooks and crannies of the place, especially since the inmates tend to hide their shit in shit (as we’ve seen evidenced by Piper’s raids of the place). Piscatella puts Luschek in charge of the campaign, and ironic move since it was his cell phone that captured the offending photo.

Also, the SHU is getting filled up, so the guards are told to get creative with their punishments, “Go freestyle” says Piscatella. 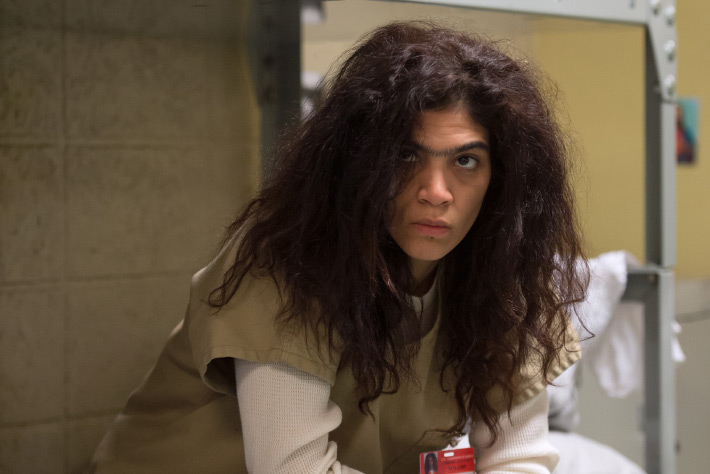 Ruiz calls for fairness and order. The Dominicans have more power than ever, but that doesn’t mean they should go around stepping on other people’s toes just for the sake of it. However, her empire might not be as put together as she thought; Maritza—nervous about the fact Humphrey is on to her—tips off CO Dixon that the “grounds keeper” seems a little weird considering his clothes are so nice and, you know, the gardening is done by the inmates.  The “gardener” is warned never to come back.  Maritza’s ensured she doesn’t have to run drugs anymore–something Humphrey’s been catching wind of. Although she’s angered Ruiz, it seems as though her plan has worked.

Speaking of being put together and grounds keepers; in a flashback we see a clean cut Blanca, known in the past as Bianca, working as a caregiver to an old crotchedy white lady. She’s subject to her employer’s every whim and since she has to send money back to her family, she doesn’t really have any choice but to obey. That is until ol’Mrs. Sand-In-Her-Cooter goes a step too far and fires Diablo, the grounds worker. Bianca retaliates by fucking the shit out of El Diablo on the couch just where the ol’lady can see.

Flash-forward to the present Blanca Flores is a little worse for the wear with her trademark “deranged cave woman” look. With the lines for the shower longer than ever, she’s starting to smell a little ripe. She quickly discovers her odor is a weapon she can use against the guards and their racist and invasive Stop-N-Frisks. The Che Guevara of hall frisking gets her whole crew to start putting sardine juice behind their ears, but CO Stratman catches on and orders them all to be fresh as daisies, henceforth. 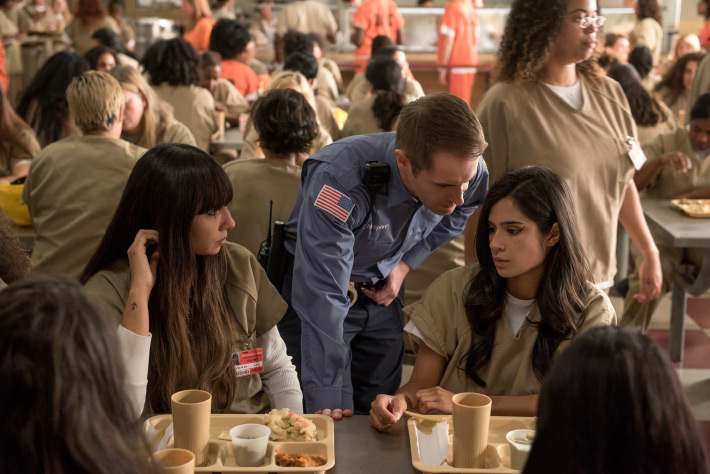 As witnessed by her narrative from the past, Flores does not back down. When Stratman catches her reeking once again, he gets creative with his punishment and orders her to stand on the cafeteria table. Dixon warns this might be a bad idea, and oh boy, does Stratman have no idea who he is messing with.

This whole standing on the table might seem like a bizarre treatment, but it’s nothing in comparison to what Humphrey has in store for Maritza. She may have thought she was out from under his thumb by stopping drug running, but after overhearing the Gun To Your Head game she and Flaca played in the cafeteria, he brings the situation to life.

Ten dead flies and a baby mouse sit on the table and she must choose one to eat. Sensing her hesitation, he adds the final element of the game come to life and literally raises his pistol to her temple.

Sister Jane is another characters acting a little more than strange: calling Coates a fucking moron, taking food from the cafeteria, smoking cigarettes, and setting her tray alight. So far none of these transgressions have helped her reach her final goal—to get sent down to Max where she can take a photo of Sophia Burset with the phone she’s just crammed up her cooter. Gloria sees what she’s doing and ends up helping her on her way to solitary and literally takes on for the team with a sock to the face from the nun.

Love and Other Drugs 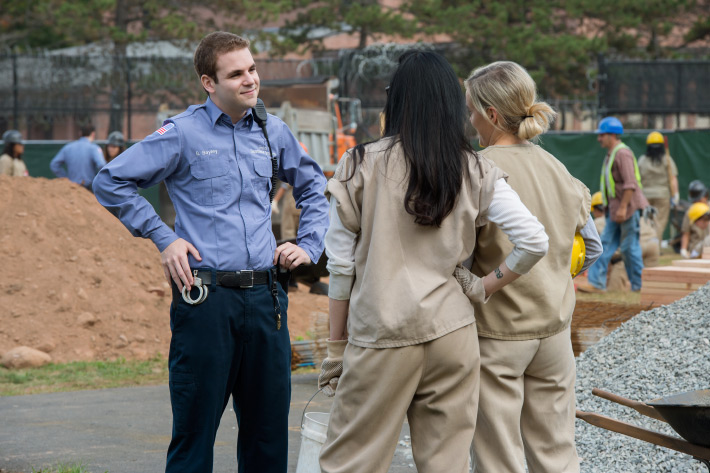 “You love heroin more than you love me.” — Lorna Muccio (Morello)

Nicky, Alex, and Piper are all on the come down from the crack smoking they did in the cornfield. But it looks like Nicky isn’t dreaming about hamburgers like the other two—she’s more interested in scoring more drugs.

Nicky goes after Muccio (Morello) for the fact that she married someone while Nichols was in Max and calls her a, “peanut brained, fickle hearted whore.” Morello retaliates by telling Red Nicky’s back on drugs. Red pretends this isn’t happening. And do you blame her? Like Alex says to Piper, sometimes an intervention makes things worse and for those who’ve seen the crippling effects of addiction, we know the only way for someone to change is if they choose to.

Aleida’s going to be discharged from prison soon and her daughter Daya tries to get some quality time in with her before she goes. Aleida pushes her away, distancing herself emotionally. Although she does tell Gloria to watch out for her while she’s gone, “She’s your daughter now.”

Prison mother Red weeps when she finds Nicky fucked out of her mind in the shower stall. Nicky revels in self-destruction. Nicky expects Red to be angry, to yell and scream for her to change. As a junkie, she’s used to this, but Red does not give her a embolden speech nor a scolding—she weeps. Red sobs, blaming herself for failing her beloved daughter.

Change, it seems, it’s easier for some than others; Pennsatucky confides in Boo how Coates apologized for raping her. Boo is not so willing to accept the words from the man who violated her friend, and she tells Penn if she ever so much as talks to him again, she’s not Boo’s friend anymore.

So Penn does leaves Boo, ostensibly, for Coates (this is a bad decision in my books) and sits with the White Power girls in the cafeteria where Rice is busy recapping Breaking Bad.

Cindy and Judy seem to get along and she and Warren hang out in Judy’s private room and shoot the shit. King’s stories are almost as amazing as Cindy’s reactions, “Who knew Nigella was so basic?” Yoga Jones isn’t too happy about this, considering she’s gone from Namaste to nah-Imma-stay-in-the-1% pretty damn fast.

Piscatella’s might be a red-hot asshole, but his burn for Luschek is pretty fucking hilarious, “It’s just, you should so clearly be working at a game stop.”