Looking at the top 10 box office films from this year and none made our list, though Pixar’s Brave came closest and Skyfall does have some delicious Deakinsian lensing. Still, looking at the landscape and it’s clear the decade of blockbuster sequels truly took over, with a Batman film, a Hunger Games, a Hobbit and a Spiderman making waves. And who the hell remembered that Ted took in hundreds of millions of dollars? Eesh.

Our list below is as eclectic as our contributors, from a period piece that divided audiences as well as critics (but certainly has fans around here!), that Tarantino kid taking on slavery in all its garishness, a masterwork of timetravel and genre mashups that actually opened TIFF (!), a Florida project of a very different kind, a haunting, harsh look at exactly the kind of mob mentality that would be amplified on social media in the years to come,  and a film of exceptional grace and tact that gained the cult of Paul Thomas Anderson many more ardent followers. (JG)

Keira Knightley in period garb, I swoon for thee. Third time was a charm for the British actress and her Pride and Prejudice and Atonement director Joe Wright. They both hit career highs with their third collaboration. This dazzlingly self-reflexive take on Leo Tolstoy’s classic novel is a must-see for anyone interested in the art of adaptation. Knightley rocks a corset just as badassedly as Joe Wright nails a long take and both artists were in their elements with this adaptation that accentuated Tolstoy’s observations of performance in social structures, particularly as they pertained to gender.

Wright ingeniously shot Anna Karenina in a dusty old theatre when budgetary restrictions prevented him from filming in the conventional scope one would expect for such a sweeping epic, which helped the film avoid the stuffiness that often defines prestige pictures. All the world’s a stage as Knightley and company enacted Tolstoy’s tragedy amidst moving sets and theatrical lighting. Wright made astute use of the setting and incorporated the theatricality into the dramatic energy of Anna Karenina. Not a page of Tolstoy’s doorstop of a novel was lost as the adaptation puts the film in constant dialogue with its source material. This version of Anna Karenina offered an epic piece of literary cinema in all its finest form. (PM)

Simply put, I’ve had enough of films about slavery and how black people were treated at that time, after that time, and so on. What makes Django Unchained satisfying as well as fun is the fact that our black lead gets to be a hero instead of a victim. More to the point, the film doesn’t force Django to settle for a moral victory. In fact, Django gets to triumph over his antagonists. Director Quentin Tarantino even structures the film so that we avoid a typical white savior ending. Django doesn’t get what he wants simply because a white person allows him to have it. Django actually gains freedom, and accomplishes his goal through his own actions by the end of the film. The last image is of Django is of him on his horse doing a victory dance instead of beaten down and just barely surviving his ordeal. (DG)

There are a lot of blockbuster science fiction films of the 2010s that deal explicitly with time and memory (several of which made this list, including Blade Runner 2049, Edge of Tomorrow and Inception). My favourite is Rian Johnson’s Looper, an appropriately convoluted time travel ouroboros of a film about Joe (Joseph Gordon-Levitt, under heavy prosthetics), a hit man who must hunt down his future self (Bruce Willis) when he is sent back in time to be killed. The film reunites director Johnson with his Brick star for a series of jaw-dropping action sequences. It also features a magical child and Emily Blunt (batting 2 for 2 after co-starring in Edge of Tomorrow). Like all of Johnson’s films, Looper is as thrilling as it is intelligent; it’s the rare modern science fiction film that gives its audience credit for being smart enough to follow its twisty plot and embrace its high concept premise. Plus: it’s the rare contemporary film where Willis acts as though he actually cares about the project! (JL)

Director Steven Soderbergh has never shied away from the sexier side of cinema. However, in 2012’s Magic Mike, the maximum potential for seduction is deftly unfulfilled in lieu of examining the construction of modern masculinity and what it means to be a self-made man today. Mike (Channing Tatum) is a confident, kind, and beautiful specimen who splits his time between dancing exotically for screaming bachelorettes, working construction, and starting his own furniture business. He takes a young man under his wing and eases him into the dancing lifestyle, all while getting closer to the man’s disapproving sister.

Rather than being a sex-crazed film filled with flesh and sweat (that payoff came later in 2015’s Magic Mike XXL), Magic Mike is a restrained look at these men and their experiences wading into a traditionally female space. Its natural performances and cinéma vérité style camera work feel like we are flies on the wall of their lives and struggles. No other film this decade has chosen to approach the performance of the hypermasculine with such a sharp eye or such an honest heart. (DC)

There’s no doubt that the Danes know how to do drama. Nowhere is that more evident than in The Hunt. Emotionally devastating, every minute of the film is a punch to the gut. Winning the Cannes Best Actor prize, Mads Mikkelsen gives the performance of his career as Lucas, a kindergarten worker accused of inappropriate sexual conduct by a young girl at school – who just happens to be the daughter of his best friend.  At times bleak and heart-breaking, Thomas Vinterberg and cinematographer Charlotte Bruus Christensen (who worked with Vinterberg on the equally stunning Far From The Madding Crowd) offer up the ultimate hygge look at Danish life. This uniquely Danish idea of contentment is at odds with the actions of Lucas’s formerly friendly neighbours as mob mentality begins to rule in the modern-day witch hunt. (RW) 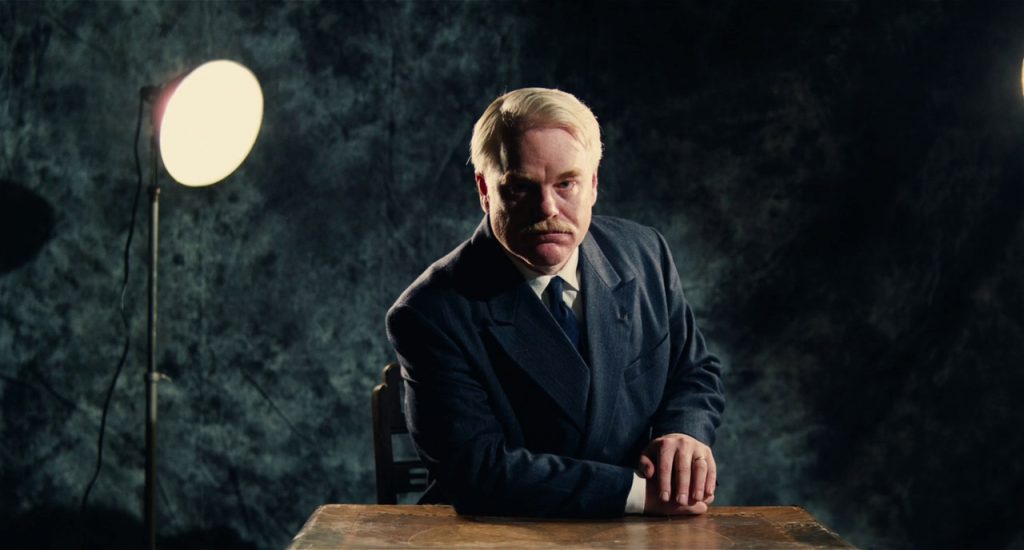 Paul Thomas Anderson has blessed us with several masterpieces over the course of two decades, but it is The Master that feels the most in touch with today’s times. Anderson’s mesmerizing film may be set in the 1950s, but it plays like a blueprint for the turbulent 2010s.  A decade where false prophets rose to power globally and facts no longer predicate what is truth. Featuring lush cinematography, a non-linear narrative and sensational performances by Philip Seymour Hoffman, Amy Adams, and Joaquin Phoenix, The Master is a fascinating look at how organized religion can manifest dangerous groupthink and infect a society.  Phoenix’s Freddie Quell, who feels like a spiritual precursor to his Arthur Fleck in Joker, knows that Lancaster Dodd, the spiritual guru of “The Cause,” is a charlatan. Dodd is a hustler just like him whose poison of choice is charisma rather than moonshine. However, Freddie is happy to defend him at all costs while it suits his needs.  Which perfectly sums up this decade in a nutshell. (CS)