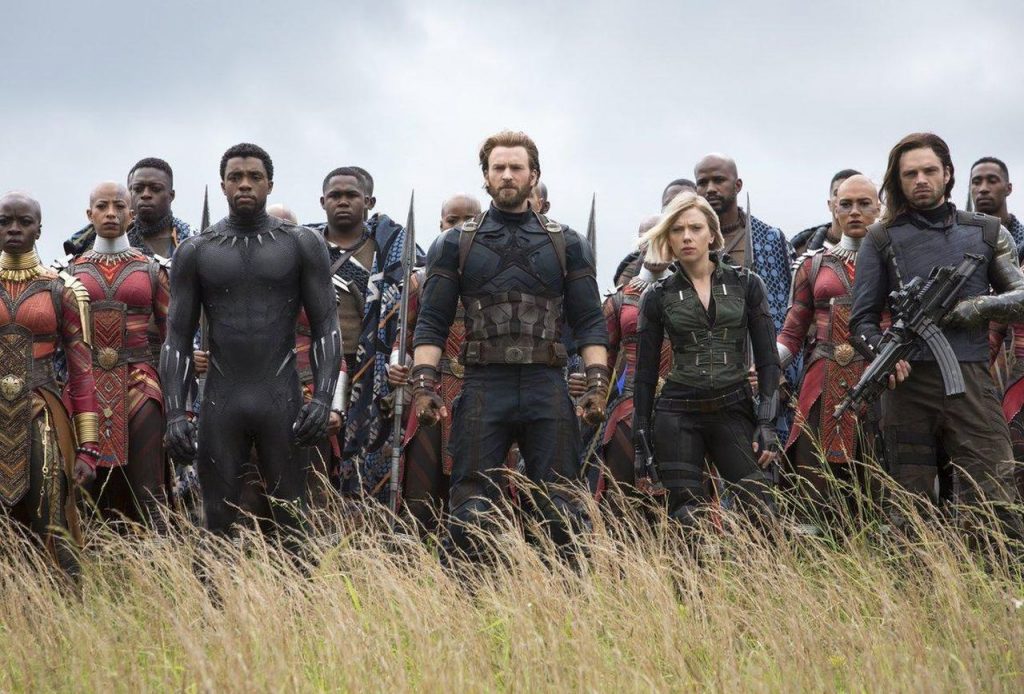 Well now we’re really into the thick of it, the beginning of the end. This is the first movie to unite all of our favourite superheroes (and a few newly redeemed villains) in one quest: Thanos (Josh Brolin) aims to amass all six Infinity Stones and annihilate half the life in the universe, and he must be stopped. It’s going to be hard to talk about this movie without spoiling anything, so I’m just going to go ahead and assume that in the year since it’s release, you’ve heard of the broad plot strokes just as part of the general cultural conversation.

Having already obtained the Power Stone from Xandar, presumably at great cost to life there, Thanos and his minions attack the Asgardian refugee ship that we saw in Thor: Ragnarok. He gets the Tesseract/Space Stone from Loki (Tom Hiddleston), and destroys the ship, but not before a dying Heimdall (Idris Elba) manages to conjure a Bifrost Bridge and send Hulk (Mark Ruffalo) to Earth.

Hulk crashes into the New York Sanctum that we first saw in Doctor Strange, and reverting to Bruce Banner, he warns Stephen Strange (Benedict Cumberbatch) that Thanos is coming. Strange quickly brings in Tony Stark/Iron Man (Robert Downey, Jr) on the conversation. After a quick lesson on the Infinity Stones courtesy of Wong (Benedict Wong), our heroes are forced to spring into action when one of Thanos’s ships appears above New York. They’ve come for the Time Stone that Doctor Strange wears. The game is afoot.

Wanda Maximoff/Scarlet Witch (Elizabeth Olsen) and Vision (Paul Bettany) are enjoying some alone time in Scotland when they’re interrupted by two more of Thanos’s goons, after the Mind Stone in Vision’s head. Things look dire for the lovebirds, until Steve Rogers (Chris Evans), Black Widow (Scarlet Johansson), and Falcon (Anthony Mackie) arrive and rescue them. They shelter at the Avengers facility with Rhodes (Don Cheadle) and Banner. At Steve’s suggestion, the group heads for Wakanda, where Shuri (Letitia Wright) attempts to remove the stone without killing Vision.

The Guardians of the Galaxy — Star-Lord (Chris Pratt), Gamora (Zoe Saldana), Drax (Dave Bautista), Mantis (Pom Klementieff), Rocket (voiced by Bradley Cooper), and a snarky teenaged Groot (voiced by Vin Diesel) — answer the distress call put out by the Asgardian ship, but arrive too late. They encounter Thor (Chris Hemsworth) floating in space, and in one of the most hilarious scenes in the movie, bring him aboard. Soon after, he, Rocket, and Groot make for Nidavellir to forge a weapon capable of killing Thanos, while the other Guardians head for Knowhere to get the Reality Stone before Thanos can.

And that’s just the setup! So much happens in this movie before we get to the sprawling final battle scenes in Wakanda, and the Snapture (™ Glen Weldon of NPR). Beyond the story that’s been building throughout the previous films, there’s the thrill of seeing all your favourite heroes come together in new combinations, and the humour and conflict that are inevitable when supersized egos clash.

So, should you watch it with your kids? Well, if you’re planning to see Avengers: Endgame you kind of have to. But, be aware that there are multiple onscreen deaths of beloved characters, a couple of them bloody. It’s on Netflix, so the ability to pause from time to time while watching at home might soften the blow.

Bottom line: If you’re planning to see Avengers: Endgame this is required viewing. Have tissues handy.