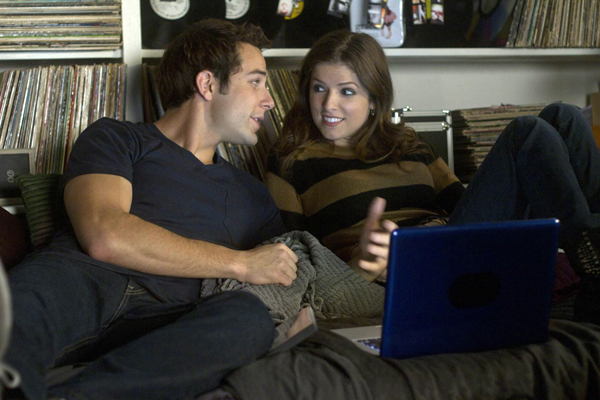 The go-to comparison for the new a cappella musical, Pitch Perfect, is TV’s Glee. That, of course, is completely unfair… to Glee.

Pitch Perfect is a pure fun film. It aspires to nothing more than putting a smile on your face, making you laugh and getting your toes tapping. On all three counts it’s a total success. The film is basically an unholy mix of Bring It On, Glee and Mean Girls; taking the best elements of all three, shaking them all up and spitting out one of the most simply entertaining films of the year.

The story centers on Becca (Anna Kendrick), who’s starting her freshman year at university. She would rather be off in Los Angeles starting a career as a DJ and music producer, but her father, a professor at the university, is forcing her to take the opportunity for free tuition. While there, Becca gets roped into auditioning for The Barden Bellas, an all-female a cappella group fronted by Aubrey (Anna Camp) and Chloe (Brittany Snow), two girls who take competition extremely seriously. Their main competitors in the world of high-stakes a cappella are The Trebelmakers, an all-male group from the same school.

Going from that basic set-up, the plot takes all the turns you’d expect out of such a film. Becca has a romance brewing with, Jesse (Skylar Astin), one of the new members of The Trebelmakers, even though Aubrey forbids any romantic contact between the two teams. There’s the rag-tag diversity element to The Barden Bellas, with characters of various shapes, ethnicities and sexual orientations. The film has a sing-off scene, in which a whole bunch of a cappella groups get together and sing-fight in a very You Got Served manner. There are competition scenes, and gross-out gags, and lots of really great a cappella singing, and it’s all extremely fun to watch.

While the direction in Pitch Perfect is generally mediocre-but-serviceable, the script really shines. The writing in the film is far more clever than it has any right to be, but then that’s probably to be expected considering it’s written by Kay Cannon, who also wrote some of the very best episodes of 30 Rock. It’s no wonder, then, that the film always retains a very sharp satirical edge, reminiscent of the similarly sharp satire in Mean Girls, which was written by 30 Rock creator and star, Tina Fey. Even when the film isn’t being totally jokey or satirical, it still plays very strongly. The relationship between Becca and Jesse is sweet, and slightly predictable in its arc, but it plays in a very honest and sometimes raw way, especially compared to other teen comedies. The inclusion of references and homages to The Breakfast Club don’t hurt either.

A great script is only half the battle, though. You’ve got to have a great cast to bring it to life. Pitch Perfect delivers on this front in spades. First of all, Anna Kendrick is the best. She’s wonderful. She brings buckets of charm and sass to the role and keeps everything very grounded. In fact, I’d venture to say it’s her best work since her breakout role as Ginny Ryerson in Rocket Science. Anna Camp and Brittany Snow are both really fun in their roles as the stalwart group leaders. John Michael Higgins and Elizabeth Banks show up—practically airdropped from a Christopher Guest movie—as commentators at the a cappella competitions.

In addition to those great turns, the film offers a few true breakout performances. First of all, Skylar Astin, who before now has appeared in bit parts here and there, most notably in Hamlet 2, charms the pants off the screen as the love interest for Anna Kendrick. In what can only be described as a Lloyd Dobler-esque role, it’s easy to imagine legions of young girls all over the world falling head-over-heels for him. Ben Platt, who plays Jesse’s nerdy roommate and aspiring a cappella star/magician, Benji, has never been in film or TV before, but his performance here will no doubt get him plenty of work in the future.

Every movie like this needs a scene-stealer. In Pitch Perfect, that scene-stealer is, without question, Rebel Wilson. Her character, the self-monikered Fat Amy, brings the comedy in spades. Literally every scene she’s in is made better and funnier by her presence, even when all she’s doing is throwing in sly wisecracks and random asides. Wilson was previously seen in a hilarious bit part as Kristen Wiig’s housemate in Bridesmaids, and since then she’s had roles in Bachelorette and What to Expect When You’re Expecting, but it’s Pitch Perfect that will make her the next big thing in comedies.

What about the music? Well, the soundtrack runs the gamut of pop. Everything from classics like Simple Minds’ “Don’t You (Forget About Me)”, to not-so-classics like Ace of Base’s “The Sing”, to modern pop hits like Jessie J’s “Price Tag” and Bruno Mars’ “Just the Way You Are”. One of the nice things about Pitch Perfect is that even in cases where the songs themselves aren’t very good, the a cappella style and infectious charm of the cast make them fun. Bringing in some DJ influence, Kendricks’ character also gets The Barden Bellas to remix songs, layered one on top of another, and the effect is actually really great, making the final set-piece of the film a real joy to watch.

Pitch Perfect is simple entertainment. That’s all it is. Nothing more, nothing less. It’s not the most well crafted film out there, nor is it the most subtle, or unpredictable. The only thing truly surprising about it is that it’s genuinely good. The script is solid, the cast is aces and the music is endlessly fun to listen to. It’s funny and charming and goofy. It’s self-aware enough to sell some of its most ridiculous elements, but straight enough that its bigger emotions land perfectly. Above all else, though, Pitch Perfect is just so much damn fun to watch.