Have you seen the ads for Netflix’s new series Marco Polo? If you haven’t, then I am impressed by your use of blinders during your morning commute (my sense of balance throws me off whenever I put mine on, rendering them useless).

If you somehow haven’t seen or heard, the show is Netflix’s bid to capture an audience craving action-adventure series similar to Game of Thrones, Spartacus: Blood and Sand, and Vikings. Produced by the Weinstein Company, Marco Polo eschews dragons and instead focuses on bringing to life a dramatized version of the famed explorer’s adventures as an agent within Kublai Khan’s expanding empire. Intrigued by the buzz, I jumped at the chance to preview the series and interview its co-executive producer Patrick Macmanus and one of the show’s stars, Canadian actress Olivia Cheng.

So what do I think about the series? Bottom line: while Marco Polo has flaws and could benefit from snappier writing and quicker pacing, it’s ultimately an enjoyable series well worth your time. Let’s look at four reasons why you’ll like it:

Instead of mythical heroes, Marco Polo features a fascinating cast of characters largely rooted in reality. This is one of the first major dramatic productions to tackle the Eastern tales of Kublai Khan’s court, so all you history nerds will finally be able to view the figures you’ve read about in their true non-documentary-series glory.

Macmanus expanded on the difficulties of balancing historical accuracy and sensational television, stating that the show adhered to big historical truths such as battles and characters’ roles and wrote in around them.

“We amped up some of the drama, espionage, intrigue [and] romance, but we have always held true to the signposts, historically, which we took from Marco Polo’s own travels,” he said.

It’s not entirely surprising, but the Weinstein Company-backed show is stunning. Natural and constructed sets give a setting like Khan’s imperial court its necessary grandeur. Rumoured to cost $90 million, season 1 of Marco Polo uses that budget wisely, shooting the outdoor portions of the story in breathtaking portions of Venice, Kazakhstan and Malaysia. The show also sunk a significant amount of money into hiring world-class artisans. Among the impressive team is Academy Award-nominated production designer Lilly Kilvert (The Last Samurai) and Academy Award-winning costume designer Tim Yip (Crouching Tiger, Hidden Dragon).

But you know what? These moments aren’t as bad as they sound.

There are no women actually raped on Marco Polo, nor are any of them impaled with arrows. A woman’s death doesn’t propel a man’s subplot. When Mongolian warrior Khutulun (Claudia Kim) has sex with Marco Polo it’s because she wants to. And the nudity here? Well, it mostly makes sense.

Unlike in other shows (*cough cough* problematic bae Game of Thrones *cough cough*), concubines can be logically featured here because they were part of a societal caste during the historical period. Their inclusion (beyond providing opportunities for sex scenes, let’s be honest) adds an interesting “lower class” dimension to the primary “high class” royalty plot. Although the nudity is at times excessive, it’s largely used strategically instead of purely for titillation. Even the naked kung fu works to showcase the simultaneous vulnerability and power of Olivia Cheng’s character Mei Lin.

When asked about the amount of nudity in relation to the story, Macmanus launched into a passionate answer: “There are many series that use sex and nudity as a form of gratuitous flavour. I genuinely believe we never did that.” Referencing a scene wherein women are lined up to be chosen as royal concubines, Macmanus noted that the sequence “is devastating and ultimately terrifying and it’s sad, but it’s entirely about those three things and not about the nudity.”

Cheng added that she took the nudity aspect of the show very seriously, discussing the issue at length with executive producer John Fusco: “I don’t want me, Olivia, the actress and the human being, to be exploited the way Mei Lin was as a character in this world. And I remember John said ‘well that would be a cruel irony.’ And there was a real trust that had to go into me stepping into this. And I really have a sense of gratefulness to these guys because I think they handled it so tastefully. For me artistically I think it showed the raw and dehumanizing situations Mei Lin had to overcome.”

“There are many series that use sex and nudity as a form of gratuitous flavour. I genuinely believe we never did that.” – Patrick Macmanus

Thankfully, Macmanus promises that there will come a point in the show where the nudity will almost never be used in a scene where the story doesn’t support it (I have it on tape, I’ll be holding him to this).

In addition to the strategic use of nudity, the writers behind Marco Polo also do a commendable job in striking the right balance between treating women in a historically accurate manner, and creating compelling female characters a modern audience can identify with. Ultimately, the push and pull of these two facets of story-telling come together naturally due to the show’s dual settings. Macmanus explains: “We always had to be very mindful that we were writing these characters in two different worlds, which ended up contrasting quite nicely in terms of the stories themselves. There was the Chinese side, where women were ultimately cast aside, either as concubines or at the whim of powerful men. In Mongolia, though, women were lauded. They were warriors, they were leaders, they were never seen as second-class citizens. And to watch a [Chinese] character like Mei Lin, who is subjected to the desires of her brother, come to this Mongol world, I think it’s interesting.”

Cheng agreed with the producer’s comments, noting that this very contrast added to the complexity of her character. In China, she explains, Mei Lin is demonized for possessing stereotypically male characteristics such as strength, intellect and political prowess. In Mongolia, however, these characteristics are revered in Empress Chabi, adding to Mei Lin’s frustration. 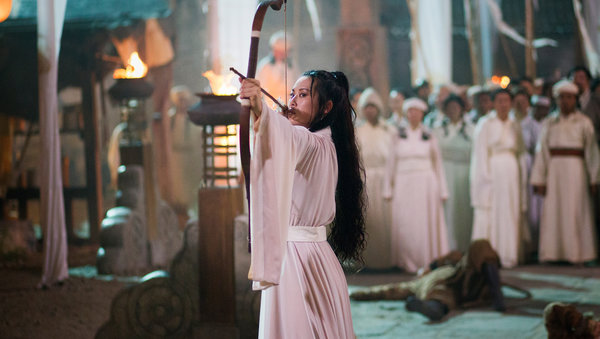 1) Probably the most diverse cast on television…ever?

Although Asian cinema is replete with beautifully crafted films of every genre imaginable, the presence of Asian stories has been incredibly miniscule within the North American market. In an industry with arguably liberal leanings, diversity is still depressingly out of reach for Asian-American actors. According to a University of Southern California study, Asian actors make up just 4.4 per cent of speaking characters across last year’s top 100 grossing films. Even when these actors are cast, their roles all too often require them to portray sexless stereotypes if they’re a man, or figures fit for fetishization if they’re a woman. Most upsetting, stories about minorities may not feature any visible minority actors. Yes, apparently Hollywood is under the impression we’re horrible robots who can’t relate to a human story unless that story is told by a white person. A recent example of this whitewashing is the film Exodus, which came under fire for casting white actors to play the lead roles in a film about the Egyptian figure Moses.

In light of this, no one can blame you if your first thought upon seeing Marco Polo’s promotional material was “ah yes, because the best way to learn about a complex Asian empire is through the eyes of a white guy. COME ON!” With a title like Marco Polo it’s easy to assume the show is well… all about Marco Polo. Interestingly, the promotional material suggests a Caucasian focus that isn’t found on the show itself. In actuality, the series is composed of a huge ensemble cast, over 90 per cent of which is non-white.

Truthfully, Marco Polo is the least interesting character the show has to offer. Instead, the Asian actors take centre stage, drawing you in with tales of espionage, warfare and familial struggle.

It’s as if the Netflix team thought, “let’s feature a white man as the main figure so people will be tricked into actually watching one of the most diverse casts North America has ever seen. Like a Trojan Horse for bros!”

“Marco Polo is the least interesting character the show has to offer. Instead, the Asian actors take centre stage”

Although it’s sad the company felt it had to rely on this tactic, the strategy worked brilliantly when Orange is the New Black creator Jenji Kohan used it.

When asked to reflect on how the production team came up with the show’s ‘voices’, Macmanus shared that “We ultimately just told the best story we could and we created the most intriguing, compelling, sympathetic, sadistic (at times) characters that we could. We never set out to make a huge statement when it came to the representation of [minorities] but it ultimately became that. And we’re very proud of the fact that we held true both to the story, and to the time period.”

Touching on Hollywood’s flawed notion that audiences are hard pressed to embrace non-white protagonists, Macmanus hopes that “people will look at the series and forget about what they’re seeing and relate to the characters and to the story.”

The rarity of such a predominantly Asian perspective is not lost on Cheng. She noted with enthusiasm that the show was an incredibly different experience from the majority of projects she’s been a part of: “[In] 90 to 95 per cent of what I’ve done, I am the token Asian. I am the Asian ethnicity that came in as the ethnic wild card. It was very different to be amongst peers from all over the world who had similar experiences like mine, who had faces that looked like mine. It was a really special opportunity.”

When I shared my initial apprehension about what Marco Polo’s perspective would be, the actress confessed she shared the same fears before reading the script: “What was such a special surprise was getting to see how complex and how layered these characters were. None of them are really good or innately evil. They all have moments of doing good and all have moments of doing incredibly ruthless things, but you understand what drives each of them, and I think that’s what makes good characters and that’s what builds good story.”

Is the show perfect with respect to how it portrays its Asian characters? Well, no. Stereotypically Asian tropes still inexplicably worm their way into the story. Wise old man who teaches a white dude kung fu? Check. Calligraphy lessons? Check. Ninjas with a penchant for killing in sneaky ways? Check. Although the series plops in these story elements willy nilly, I’m willing to give Netflix the benefit of the doubt that it’ll scrub the most undesirable aspects of the show in season two.

So there you have it folks. Stick with Marco Polo through a slow first three episodes and it’ll all be worth it for the aforementioned reasons and more!