Last year, we told you about our biggest gaming heartbreaks. Before that, it was our first game loves. Now that another Valentine’s Day is upon us, its time for another romantically-themed list of video games.

This year, the Dork Shelf staff is pleased to share some of our favorite in-game relationships. Some of them are romantic. Some of them are less so. But relationships can take many different shapes and have many different meanings, and the platonic bonds of friendship are no less powerful than the turbulent throes of love. These were the relationships that stuck with us long after the credits rolled, the ones that demonstrate just how moving digital interactions can be.

What’s your favorite gaming relationship? Feel free to let us know about all the memorable ones we missed.

For all their animosity toward one another, Portal‘s Chell and GLaDOS share the most intimate relationship in gaming. Their time together illustrates a sad and scary truth about love: even when it’s killing you, the most absurd romance still feels better than loneliness.

For Chell, the entirety of Portal and the first half of Portal 2 is an intimate exploration of GLaDOS’ anatomy. We later learn that each time Chell successfully solves a puzzle, her misanthropic AI partner is dosed with pleasure. All the while, GLaDOS is attempting to bring Chell to her own little death. Ah, the nuanced dance of robot/human courtship.

After some serious getting to know each other in the name of science, GLaDOS realizes their strange romance is going nowhere and it’s heartbreaking. For me, very few moments in gaming can rival the intense longing I feel during the final moments of Portal 2. After the inevitable breakup and ejection into a cold, lonely world, there is a desperate need to be back in GLaDOS’s chambers, elusively pushing each other’s buttons.

I’ve already written and spoken enough about my relationships in the Mass Effect series, so instead I’m going to talk about the relationship between Phoenix Wright and his assistant Maya Fey. From the beginning of the series when you suddenly get thrown into a working relationship with Maya after her sister dies, her charm and humour bring the series to life. With each passing game you (and Phoenix) become more attached to Maya.

When the final case in the second game revolved around Maya getting kidnapped, I found my heart pounding as I rushed to finish the case and save her. The relationship between Phoenix and Maya truly hits its peak in the final case in the third game (Trials and Tribulations). As the case moves along you can’t help but wonder what has happened to Maya, and the conclusion and their reunion is even more satisfying. Although they haven’t quite ended up together yet, I just know that some day they will.

I was in Hong Kong after a lengthy stay in the States when I met Amanda. She was an American looking for teaching opportunities; I was an undercover police officer rising in the ranks of one of the most vicious Triad organizations in the city. We met by accident, and hit it off right away. We had a mutual love for Kung Fu, and I even took her to meet Sifu Kwok – the man who practically raised me – at his dojo. I still fondly remember the intimate moments we shared, overlooking the beautiful lights of the city.

But it wasn’t meant to be. Like a cheap firecracker, our relationship fizzled just as quickly as it had sparked. There were other girls after her, but none of them left quite the same impression as Amanda.

I understand now that living as a cop posing as a Triad is a solitary existence, and I’m destined to live the life of a bachelor. It’s best to let sleeping dogs lie.

It was refreshing to see a mature, largely drama-free relationship between two adults who clearly celebrate their love while intelligently navigating the challenges thrust upon them. Both entering the partnership as grown-ups, these two feisty Soviet blocks grow together in some truly compelling ways as the story progresses, never once losing sight of who they are as individuals while inching closer and closer as a couple. I wish I could say more, but I don’t want to spoil anyone! 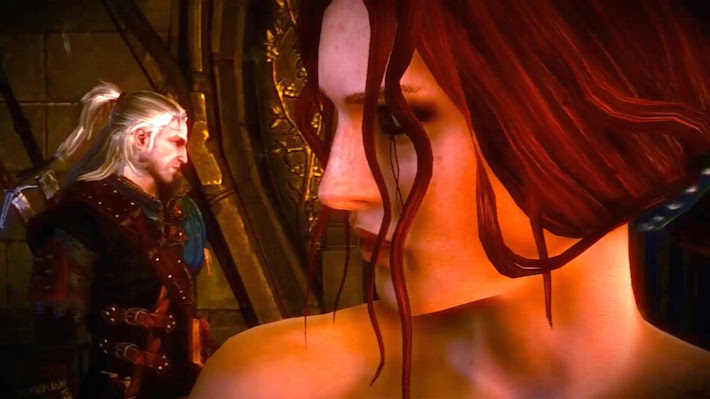 Triss, Geralt, and Yennefer – The Witcher 2

The love triangle between Triss, Geralt and Yennefer in The Witcher 2 is great romance material. While Geralt yearns for the mysteriously absent Yennefer, he devotes himself to a smoldering romance with Triss. Triss’s own devotion is true enough that she willingly offers Geralt her assistance in locating Yennefer, ensuring her own heartbreak rather than standing in the way of Geralt’s love. Geralt pretends there’s just a big cynical callous where his heart should be, but he’s in for some heartache when he finally finds Yennefer in The Witcher 3.

Garcia and Johnson – Shadows of the Damned

Shadows of the Damned is supposed to be a game about a man going to hell to save his girlfriend, but in truth it’s just a game about a boy and his Johnson.

Or rather, it’s a game about a demon hunter named Garcia Hotspur and his co-dependent relationship with Johnson, the demon skull who can turn into a gun and a motorcycle and also answers to Big Boner and Hot Boner as the situation changes. Somewhat amazingly, the game is even more masturbatory than it sounds.

Other aspects of Shadows of the Damned are far more problematic – it is a Suda51 trip – but there’s something almost sweet about the juvenile bond between Garcia and Johnson. The two are completely comfortable in each other’s presence, their camaraderie built on mutual understanding and shared motivations and ideals. They just get one another, to the point that’s it impossible to picture them apart.

And sure, the fact that Garcia needs Johnson to shoot things might play into that. But it still proves to be a surprisingly sincere friendship that resonates in the gameplay in a way that distinguishes it from romances that only exist in cut scenes. Shadows of the Damned may be childish, but it can also be sincere, and sometimes that can be enough to keep you going.

Cloud and Tifa’s relationship  is memorable because of how bad it is at the start. Even though they’re basically deified today as The Sword and The Tits of Japanese RPGs, it’s easy to forget that they are, at their core, a young man and woman with serious problems coming to grips with their childhoods.

Cloud was a shy runt who got the idea to join SOLDIER, the world’s elite mercenary army, to impress the girl next door. Tifa, while the popular kid on the block, had trouble coping with the recent death of her mother.

These insecurities would linger even as decidedly Video Game things happen to them. Cloud’s fate is irrevocably transformed by Sephiroth. They find other travel companions, go on an adventure.

Cloud finds his “perfect” partner in Aeris, who is later murdered.

When they find the courage in themselves to confront their pasts, deciphering the lies they’ve told one another and to themselves, they also gain the resolve to save the world. And that’s what makes their love story one of the best in gaming.