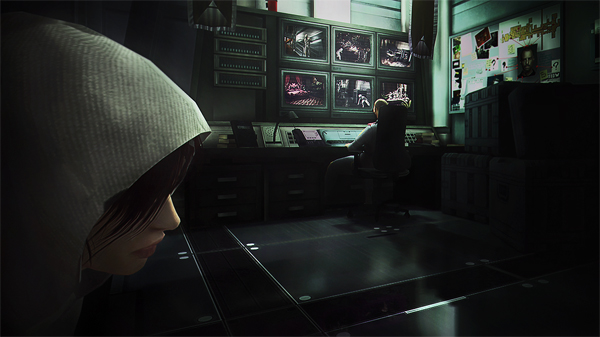 Hope is about to be erased. She looks at me, pleading for my help, but we’re interrupted when the authorities come in to her room to question her for defacing a Manifesto. I eavesdrop on the conversation through a camera, scanning the room and the dossiers of the characters interrogating her. The authorities escort Hope out of the room to imprison her, and now I have to help her escape.

This is Exordium, the first episode of Camouflaj’s République, a touchscreen stealth action game set in a dystopian, totalitarian state. Hope has to escape a facility named Metamorphosis by outsmarting security officials, whether that’s quietly maneuvering past them or subduing them with pepper spray. I guide her towards walls, boxes, and lockers to keep her at a safe distance from the authorities, while a double agent named Cooper – who communicates in text-to-speech and Kaomoji emoticons – occasionally calls to provide tips on my hacking abilities and usable items in the environment.

The game is clever; the player is forced to escape a surveillance state by hacking surveillance cameras. It’s satisfying to learn the paths of patrolling guards before sneaking past and pickpocketing them without raising the alarm. The game mechanics respond well to the touch, though there are instances when accidental prompts or an ambiguous tap can send Hope out of cover right in front of a security guard. It’s not game-breaking – pepper spray is an effective counterattack – and the gameplay is otherwise smooth and efficient. Mastering the stealth sequences feels like an accomplishment.

The narrative is also compelling, boosted by voice cast that includes heavy-hitters like Jennifer Hale and David Hayter. I felt more for Hope within the first few minutes of the introductory cut scene than I felt for Jodie Holmes in the entirety of Beyond: Two Souls, and Hope was certainly more responsive than Jodie and her sidekick Aiden.

Visually, the transition between different surveillance cameras is sometimes jarring in a way that doesn’t play well with my motion sickness, but it’s a minor flaw when comparing those brief moments to the polished environment design in the rest of the game.

I’m excited to see more from Camouflaj in the upcoming episodes of République. 2013 was a solid year for iOS platforms and République further showcases the capabilities and power of the often overlooked iOS devices. The first episode of République is gripping with tension and wit, especially when Cooper talks about being bullied for being a gamer and discovering Kickstarters and episodic games. It’s a unique experience that combines the best of different game and literary genres and sets the bar high for future episodes.