Event though the festival is now officially over, we will continue to roll out Slamdance 2015 coverage for the next couple days, mostly interviews with the filmmakers we conducted while we there. Our interview Nisan Dağ & Esra Saydam, the writer/ director team of Across the Sea,  is particularly exciting since they went on to win the Audience Award for Narrative Feature as well as an honourable mention from the jury. Learn more about their process and the film’s journey below. 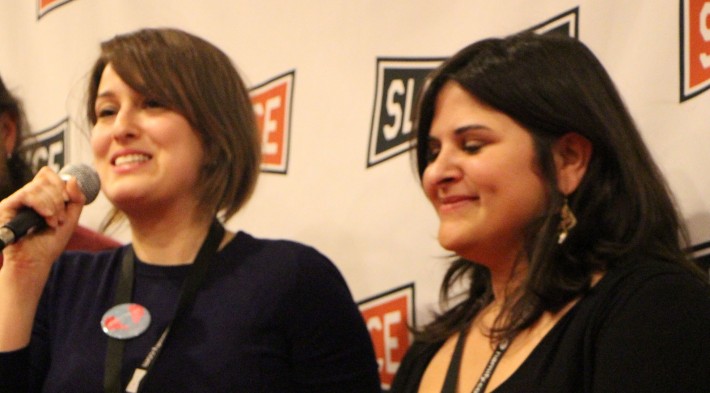 Dork Shelf: What is Across the Sea about?

Nisan Dağ: This film is about this Turkish woman who has been away from home for 8 years and she’s living in New York. She’s pregnant and she finds out that her summer house is being sold, her only place to go in Turkey. She goes back home after so many years with her husband and there’s a first love there waiting. A confrontation, basically. So it’s a love story but also a healing story as well.

Esra Saydam: I was living in the states for five years and all of a sudden I started to feel extremely homesick but it was not because of the years I spent, it was mostly because of the disappointments I had, both in my personal life and my career. I felt like I was not enough so I started to look back and see what I missed back home and what I sacrificed to come to the states. Like Nisan says, sometimes you just ask yourself ‘what if I’d stayed there’? The ‘what if’ question. And so then I wrote a short story, a short script that was part of a first year project at Columbia University graduate film program, where I was studying and I realized that most of my classmates reacted to it. It was not the most original story ever but for some reason people always had those things in their lives so they were reacting to it. And then the next year Nisan came to school and she had a similar story.

DS: What were some advantages and disadvantages of making an international coproduction?

ES: We didn’t really plan to have an international production but most of our filmmaker friends were in New York because that was where we learned filmmaking and practised filmmaking. We knew that we wanted to make a film in Turkey, so we decided to bring our key personnel from New York as well and created this bi-cultural, or even tri-cultural team. Advantages are that the Turkish film industry has so much to learn from the other countries’ filmmaking industries and vice versa.

ND: Actually we had a film with two passports, so that’s great because you have two homes. We have Turkey and the U.S. and we get to have two very exciting premieres, so in that sense I think that was fun, but expensive on the other hand. Trying to exist in two different continents.

DS: What do you hope audiences take away from this film?

ND: For us this film is like a ten layered cake. Some people can just eat the top layer and enjoy it, which is perfectly fine. Some people can go to the depths. Basically we just don’t want it be as strict as black and white. We love this gray area and we enjoy it a lot when people take away different things, have their own experience and own interpretation.

ES: There are also multiple layers of filmmaking. The first layer of the  purpose of this film for me was a personal reason. There are so many confrontations in your life that you kind of delay and escape from and maybe we are still escaping from that, so that was a way for us to confront it. And then the second layer, we know that many people have that desire to confront people, so they don’t have to get a message out of it or anything else but if they can somehow project themselves and get a feeling of emotion out of them and remember the people in their past and somehow commemorate them, then that’s very much enough for me as a filmmaker. I really enjoy people crying or feeling something after they watch our film. Also, in terms of reactions of the audiences, we’ve been in four different continents and I can say that all of the reactions are different from each other. Some people hate our lead character, some people love her. Polish audiences have some kind of education of symbols I guess because of Polish cinema so they reacted more to the little things on the screen and they laughed at it where as most of the audiences in other countries didn’t do that.

ND: So it’s almost like a social experiment, watching it with different cultures and comparing who is relating to what.

DS: What is your least favourite question to be asked in interviews?

ND: I’m very passionately hating this question: ‘what is it like making this film as a female director?’ because I feel like that question categorizes me, degrades me as only a female filmmaker but I want to see myself as a filmmaker. I feel like people are so complicated and we aren’t divided into two as male and female, we have so many different things, our personalities and background. I think there are different groupings. I respect women who make female stories, socially conscious stories, that’s just not my personal approach. I want to make movies about human stories, I could even make a movie about an alien. Why should I just be limiting myself to female stories?

ES: One thing I hate is when critics over analyze the film, so that they not only break down the film but also break down the director. I may have a female perception into a story but maybe I don’t want to know about it, it should be more spiritual, without thinking. I should not be saying to myself “I’m a female director” so I have take care of women issues and I have to fight for them. I’m pretty sure I will deal with female characters and defend them but it shouldn’t be implanted in my head.

DS: Who are some of your cinematic influences?

ND: I think when go to the genesis of how filmmaking started for both of us, it might be different. I was doing stop motion animation, I was influenced under the Czech puppetry and then I watched Maya Deren’s Meshes of the Afternoon and that excited me about how I could use live action to incorporate the magic world and then from there on I started to get interested in drama and live action stories. Then of course I also started enjoying movies like Blue Valentine, I really enjoy classic movies, I still enjoy Tarantino films too. It’s always a mix for me because I like to try different genres.

ES: Basically I was mostly influenced by directors like Bertolucci or Scorsese, I also love Dog Day Afternoon. I love how characters go to the edges of their souls to overcome something. People like Bertolucci frame it in such a great way that the performances get even more intensified and beautiful, so I was always inspired by directors like that, but of course both of us have many many films to pay attention to.