Star Wars: The Clone Wars shines in three distinct ways. The first is its animation, and the show has never looked better than its final season. Episode three, On the Wings of Keeradaks, features several jaw-droppingly gorgeous shots (they scream out screensaver). The camera work stands out in episode two, A Distant Echo’s quieter character-driven moments. It’s here where the show offers compelling character development that the prequel and sequel trilogies lack. The kind of character beats that make the big, bombastic battle sequences carry emotional weight.

On the Wings of Keeradaks is where the series shines and falters in equal measure. This is summed up by the depiction of native inhabitants whose worlds are always upended when the Separatists or Republic forces arrive and bring the Clone Wars to their doorstep.

At its best, The Clone Wars provides a greater focus on how the inhabitants feel about being dragged into the war. Why are they neutral? Why wouldn’t they take the Jedi’s side since they are the heroes of this story? This played out in season one when Anakin, Aayla, and Ahsoka crash land on the planet Maridun. The planet’s inhabitants had opposing views on what to do. Some felt they needed to fight, and others thought that they had no part to play in a war between the two warring factions. A war criminal eventually forced their hands, but the conversation leading up to their decision was valuable. 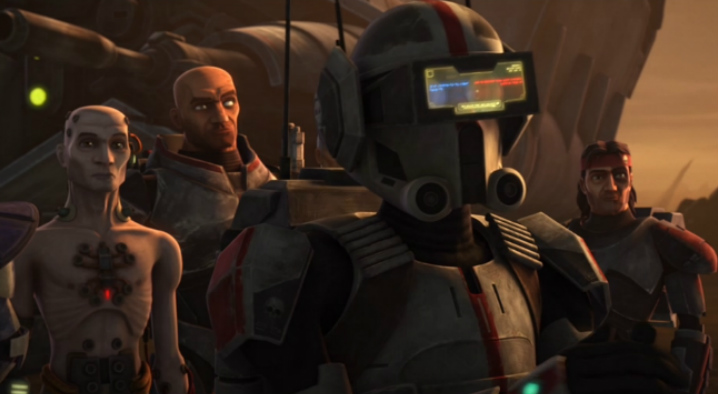 Here, the Poletecs have bits of shading and rightful indignation, but its depiction comes across as too simplistic. The last line in the episode is a bit of a head-scratcher – why would the Poletecs suddenly agree to be allies of the Jedi? What is the reason for them to do so – surely Echo’s treatment at the hands of the Techno Union doesn’t hold that much sway – and there is something to be said for the recklessness of the Republic forces that brought war to the village of the Poletecs. There isn’t any mention of what might happen to the rest of the village’s inhabitants if Wat Tambor should take revenge. It’s simplistic to the point of fault.

Where this duo of episodes shines, outside of the direction in episode three (which is truly spectacular), are the emotional connections it draws between its characters. The Clone Wars has benefited immensely from its capacity to add new depths to characters we’re already familiar with in ways that doesn’t contradict what we already know about them. The smaller moments, like where Obi-Wan reveals that he knows of Anakin’s conversations with Padmé, are excellent. The scene reveals the little bits of distrust and hints at the hurt that will tragically spiral into flames in Revenge of the Sith.

A Distant Echo also does a great job of contextualizing Anakin and Padmé’s relationship. Arguably the greatest failing of the prequel trilogy was establishing that central emotional thoroughline in exploring what is, at times, a toxic relationship. Here, you clearly see that there is an understanding that tragically draws these characters together. Once Padmé makes Anakin understand the root of his concern for Rex, he is forced to consider his role in supporting the people who have his back. The tragedy on display in that quiet little moment, lands effortlessly.