Streetcar riders looked on with puzzlement late last night, as they passed by several hundred people lined up in front of the Bay and Dundas Best Buy store. Was there an iPad going on sale that they had not yet heard about?

The occasion was the midnight launch of Starcraft II: Wings of Liberty. The mass of humanity snaked all the way from the store entrance on Dundas Street around the block down Bay, almost to the end of the colossal Canadian Tire store. The crowd was composed mostly of people in their teens to late-twenties.

Several security guards and store employees are busy chatting with people in line and making sure that nothing got out of control. But this wasn’t the kind of crowd that threaten to mimic the worst Boxing Day Door Crasher events. Whether playing their Nintendo DS’s with others around them, lounging in lawn chairs that they had brought for the long wait, or simple chatting with friends and others in line, it was a very relaxed, yet excited atmosphere.

A laptop manufacturer had a tent set up in front of the entrance with a DJ playing music (not video game music), and a table with a handful of  laptops, which some people used to play a game of the original Starcraft. Another tent nearby provided the wireless internet connection required to play the game. A raffle was held for those waiting in line, with a $2000-plus gaming laptop as the grand prize. 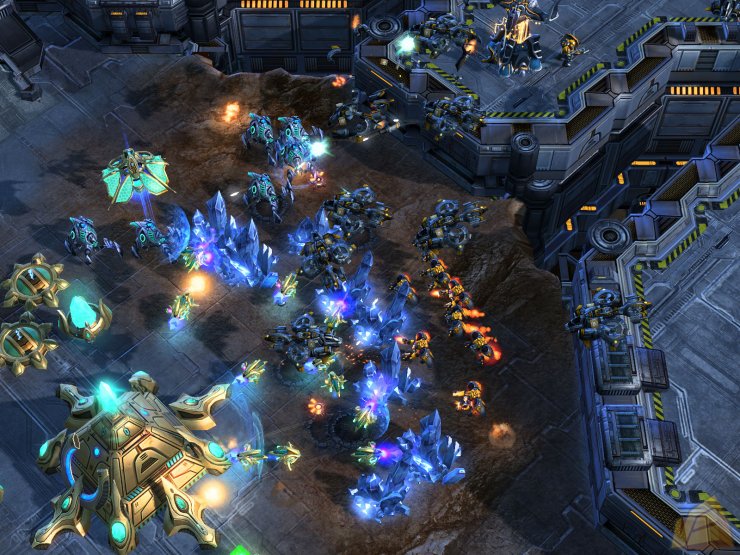 For those not familiar with the first Starcraft, it’s a sci-fi strategy game with a setting that resembles a cross between Alien and Starship Troopers. The game was released by Blizzard Entertainment way back in 1998. It isn’t one of the most widely known video games in popular culture; it has neither the crossover appeal of a Beatles: Rock Band, nor the controversy of the Grand Theft Auto series. Yet with all-time sales of more than 9.5 million copies, it is one of the most-played and most-loved computer games of all time. About half of those sales alone are in South Korea, where expert players participate in televised tournaments with thousands of dollars’ worth in price money on the line. If you knew a kid in high school who continually skipped classes to stay at home, locked in his room as the sounds of explosions and alien warbles emanated forth, he or she was probably playing Starcraft.

Three teenagers at the front of the line were noticeably younger than most others. Jack Harrison is 14 and his friends Carter Mancuso and Sebastian Thomson-Jagoe look no older. They arrived at noon, and braved the baking summer heat to be among the first to hold a retail copy in their hands. “We were talking with some of the others in line, because it’s very nice to actually get to know the people,” said Harrison, amidst a small pile of empty cans of Red Bull, who has been playing Starcraft since he was eight years old. “It was great.”

Passersby conveyed mixed reactions. One man’s eyes lit up when told that the line was for Starcraft II; he, too, was a long-time player.

“Nerds!” yells a man across the street.

“Duh!” replies someone in line.

The crowd outside Best Buy were attracted by the raffle draw and the free gaming mouses that were awarded to the first 150 people in line. Up the street at their sister store, the Yonge and Dundas Future Shop’s line was much smaller, about fifty-strong, but no less dedicated. Peter Brockie had been waiting at the front of the line in his lawn chair since noon. He says that he’s been a Starcraft player since the beginning. “It’s one of the few games that hasn’t been updated in that much time, but is still played by tons and tons of people,” he says. “It’s still massive.”

Midnight approached, and the doors opened. Best Buy customers were ushered in fifteen people at a time, excited but well-behaved, the shelves of Starcraft II waiting for them at the very front. The rest of the store was closed – no time for browsing, as the midnight launch would last only about an hour and a half, or until everyone in line had their copy. People cheered as the first people walked out with their spoils, held high. One employee chased after Harrison and his friends; he had left his debit card on the cashier’s desk in his hurried elation.