Starhawk, from LightBox Interactive and Sony Santa Monica, is an ambitious game that combines several genres in an attempt to create a unique experience for gamers. Unfortunately, Starhawk seems content with stuffing its well-crafted and genre-bending gameplay into a very standard — and safe— game with few surprises and little ingenuity in terms of game modes and game types.

Starhawk is part tower defense, part third-person shooter, part vehicle combat game, and part combat flight-sim. The good news is that all of these disparate genres mesh seamlessly together and nothing feels out of place or lacking in detail and focus — the flight mechanics are particularly fun as we were able to perform aerial acrobatics with ease. The major issue with the game is that the ingenious melding of genres simply treads old ground. We found that Starhawk’s unique gameplay can feel underwhelming due to the game’s lackluster singleplayer campaign and its reuse of all the multiplayer staples gamers can find in any major release. 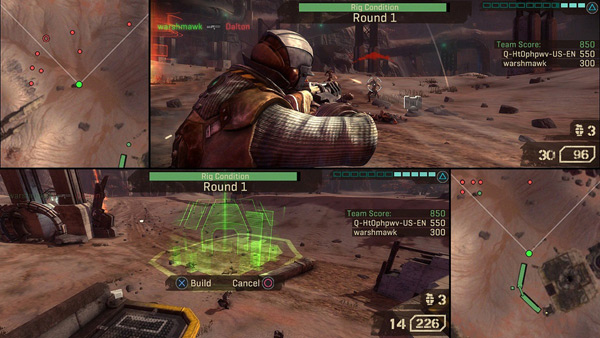 Starhawk’s gameplay revolves around building structures and armaments to defeat waves of enemies. If the player wants a tank, a dune buggy, or a Hawk — the game’s mech/flying vehicle — he/she must build the structure that allows him/her access to those vehicles. However, reducing Starhawk’s gameplay to a mere construction-worker-sim does not do justice to the game.

Once the player builds a structure he/she must also defend that building with turrets, engineering arms — objects that repair damaged buildings and vehicles — and walls. All structures and objects are built with Rift Energy: green orbs that one collects from fallen enemies and barrels scattered throughout a level/map. Players spend Rift Energy to purchase structures and objects. The more powerful the structure/object is the more Rift Energy is needed to purchase it. The give and take nature of spending Rift Energy to create structures/defenses and the need to attack incoming enemies to collect more Rift creates a surprisingly tense and strategic gameplay experience.

At first the build mechanics make the singleplayer campaign feel fresh and inviting, but once the clichéd sci-fi/western action narrative starts hitting every expected beat with every expected character stereotype — including a gravelly voiced protagonist dealing with a dark past — the campaign quickly devolves into a derivative form. As well, the overly dramatic narrative does not quite fit with Starhawk’s cartoony and over-the-top action. In fact, singleplayer feels more like an extended five-hour tutorial to prepare the player for online play than a fully engaging campaign.

Co-op is where the game’s strategic nature shines. Co-op gameplay is essentially a “horde-mode” game type where players must defend a particular area against waves of enemies. Players must work together to survive each wave otherwise they will be quickly overrun by the multitude of enemies trying to destroy everything in site. Building turrets, walls, and vehicles becomes a frantic race as players try to adapt to each new enemy thrown into the mix.

The rest of the multiplayer suite focuses on the classic multiplayer game modes every big title has: deathmatch, capture the flag, and a version of king of hill called Zones. The build and fight mechanics work well in each game mode but we cannot help feel that the game’s mash-up of genres should also include some fresh/new game modes — something to really show how combining genres can create unique experiences. Instead players get a standard set of multiplayer games that only feel slightly different thanks to the build/defend/fight gameplay. That being said, Starhawk certainly outshines most other games when it comes to having dynamic multiplayer maps. Since players are always building new structures every map will have a slightly different layout each time a player respawns, which helps give the multiplayer a bit of extra life.

Throughout our time with Starhawk we were impressed at how well the development team managed to merge all the disparate gameplay elements into every game mode. However, in terms of the game modes, Starhawk seems happy to simply repeat what others have done in the hopes that its build mechanics are enough to keep players interested. Ultimately, the build mechanics add a layer of strategy and dynamism to online battles but we found the game can feel all too similar to what we’ve already experienced in other games.