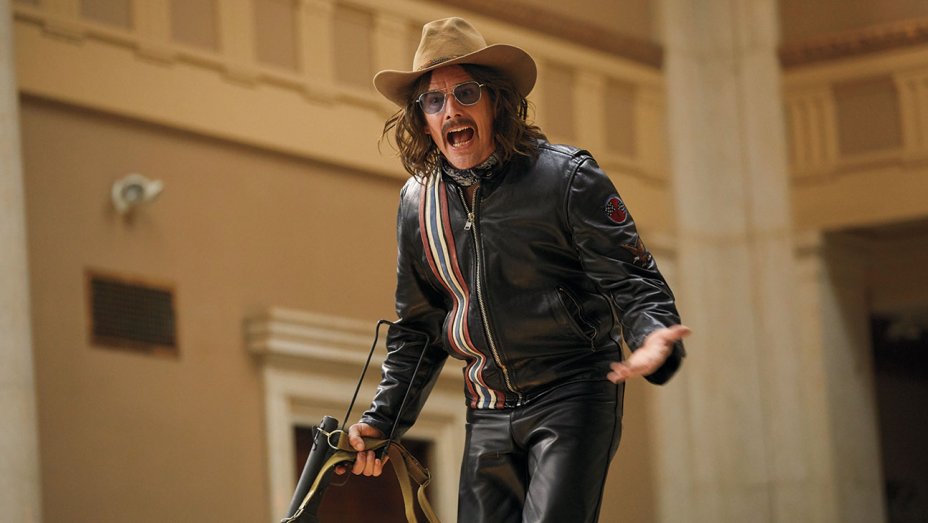 A bank robbery that, for all appearances, is feckless and wild kicks off the absurd but true story based on the bank heist and hostage crisis that took place in Stockholm in 1973. That incident documented in a New Yorker article (Daniel Lang’s “The Bank Drama”) was posited as the origins of “Stockholm Syndrome.” Ethan Hawke reunites with his Born to be Blue director, Robert Budreau, and while that film achieved a sense of truth to its subject while achieving an artistic flourish, Stockholm doesn’t quite hit the same highs as their last collaboration.
The Outlaw (Ethan Hawke), as he likes to be called, went in guns blazing to the Kreditbanken, and that’s where all pretenses of a bank robbery ended. Outlaw puts some bullets into the ceiling, demands the chief of police (Christopher Heyerdahl) be called to the scene, and promptly releases all but two of the people in the bank. It’s not the money that Outlaw wants, no, he’s requesting the release of Gunnar Sorensson (Mark Strong). The Outlaw, actually named Lars, is Swedish by birth but raised American, is quite charismatic. Donning a leather jacket with the Texas flag sewn on the back, a cowboy hat, and an automatic rifle, you could be forgiven for thinking that Lars is about to go on a killing spree, but the truth is that Lars has no intentions of harming anyone. He just wants his friend Gunnar released from prison, $1 million U.S. currency in unmarked bills and, oh, the 1968 Ford Mustang 390 GT 2+2 Fastback that Steve McQueen drove in Bullit.
Ethan Hawke is ideally suited to play the wild-card, would-be bank robber and it’s easy to see why the bank employees would develop feelings for Lars as Hawke wins over the people he’s holding hostage. Bianca’s (Noomi Rapace) relationship with Lars, in particular, is the staple that holds most of Stockholm together. Noomi Rapace is asked to deliver the whole emotional gambit, at once fearful, and then begrudgingly accepting and protective of her captors. Presented with her husband for what could the last time, Bianca gives him detailed notes on preparing the herring dinner she made for the kids, all while Lar’s gun is pointed at her. It comes as a small shock to her husband later when Bianca says of Lars, “nobody’s all bad.” Rapace makes this desperate, pressure cooker romance with Hawke believable, an essential component to a film trying to capture why hostages would aid and even protect their captors in a crisis. Lars appeals to Bianca’s by reminding her of her value as a hostage, which she interpreted as a compliment. Other than Rapace and Hawke’s chemistry, it’s a little difficult to understand why Lars had his hooks so deep into the Kreditbanken hostages.
A psychological deep dive into what made Lars and Bianca click may not have been what Robert Budreau had in mind when making Stockholm, but in choosing that title, audiences could be forgiven for expecting some insight into the famous syndrome. What seems to interest Budreau more is the encroaching militarism that seeps into policing. Heyerdahl projects the competent intentions of police in keeping law and order, but the film rather cleverly pivots Heyerdahl into an authoritarian as his methods draw scorn by the media and his fellow officers. Certainly, Lars off-kilter behavior didn’t make sense to the police. Each new demand and strategy indicated that no one, not even Lars, knew what is going to happen next apparently. With three hostages in the vault and negotiations stretching over six days, violence was inevitable.
Now, Dog Day Afternoon this isn’t, Stockholm has its own unique sense of humor and pacing that won’t thrill people expecting Sidney Lumet’s sense of drama and timing.  Stockholm doesn’t delve into the psychology at play between captor and captive. Whether that was Budreau’s intent is hard to discern because he plays the events of the story very straight forward, but one can tell from the performances given by Hawke, Rapace and Mark Strong that more must have been on their minds.
That Budreau is able to rein in the film from becoming truly outlandish is admirable. The director acknowledges how crazy the events depicted are, using the opening credits to remind viewers that Stockholm is “based on an absurd but true story.” Rather than indulge the inept criminal vein of Fargo, Budreau keeps the focus tight on the enigmatic characters that still make a decades-old story worth revisiting.
0 0 votes
Article Rating
Bea Santos • Christopher Heyerdahl • Ethan Hawke • film • Mark Strong • Noomi Rapace • review • Robert Budreau • Stockholm • Stockholm review • Thorbjorn Harr
« Previous Article
Star Wars Episode IX Title Reveal
Next Article »
Man Who Killed Don Quixote Interviews