Peter Counter and Susan Stover are back at you with recaps of season 2 of Stranger Things. They guided you through the Upside Down last season, and they’re ready to jump right back in.

It’s one year after the Demogorgon’s invasion of Hawkins was thwarted by a self-sacrificing psychic child and her friends from the high school AV club. Will Byers is back from the Upside Down, which, as far as the unknowing citizens of Hawkins are concerned, means he’s a back-from-the-dead zombie boy. Life is just going on, as if nothing bad ever happened. But a new invasion is threatening Hopkins: a new monster, a new mystery, and a new g-g-g-g-girl. Happy Halloween ’84!

Susan: As I wrote last year, I was bracing for disappointment when it came to season two of this instantly beloved show. But I am a cynic, I have to be honest – if episode one is any indication – my reservations are about to be proven misplaced. With the same irresistible nostalgic charm, genuinely scary moments, and childhood resolve in a definitely adult situations, Stranger Things 2 is a treat. And with the Halloween weekend debut, it’s got plenty of tricks for us.

One such trick is a numbers game. Where exactly is Eleven situated in the line-up of experimented on children? With a suspenseful open to the episode we at least know there is an 008 out in the world, in Pittsburgh no less. With that all too familiar bloody nose she’s pulling off heists and making officers named Adams look like damn fools.

Peter: Hey, I fully empathize with Adams’ foolish bedazzlement. A big city car chase between cops and super-robbers is not how I expected Stranger Things 2 to start. In season one, we did leave Hawkins on occasion for the big city, mostly when Jonathan went to confront his deadbeat dad Lonnie about Will’s disappearance, but nothing like this. All new characters, real-deal action movie stakes, and a hallucinatory telepathic bridge collapse – this reintroduction to the show had everything except anything I’ve come to associate with Stranger Things, until the big reveal that the mage of this new party was part of the same experiments as Eleven. And you know what? I loved it.

Stranger Things became so iconic in the year-and-a-half since it initially aired, the best possible way to revisit it is through this kind of disorientation, hiding the old show’s aesthetic core under a bright new paint of dazzle camo. This scene is essentially the grown-up version of season one’s iconic bike chase, in which Eleven uses her powers to evade government shadow agents in utility vans. Underneath the newness and streetlight sparkle of the cold open, Stranger Things 2 is making its mission statement: we’re going full sequel this year. Everything you loved, but bigger.

Susan: Dustin even has teeth now! Purrrrrr. Seriously that kid fucking kills me. The bigger and better element is definitely there with the stakes looking just a little bit higher with the “Anniversary Effect” of the Upside Down being turned right side up. The residual pain from last year’s deluge of supernatural kidnap/murder is still being felt. Poor Barb’s mom and poor Barb’s dad. They just think their daughter up and disappeared and are now paying some crack job with their house money to find the Russians who kidnapped her. Steve and Nancy try to keep cool with the colonel’s feast, but what DO you do if you know that a huge faceless creature from a world that is not our own killed your best friend and stuck her in a cocoon? Like, in what way do you break it to her parents? While Barb is at rest, poor Will’s intermittently haunted by visions of a stronger and more nefarious looking Upside Down where there is a storm in the distance.

Peter: Will Byers’ Upside Down visions aren’t the only place where a storm’s brewing. The introduction of Max – Stranger Things’ much welcome new female presence in the D&D party storyline – is scored by Scorpions’ “Rock You Like a Hurricane,” which feels portentous in so many ways. Max’s entrance with her (I assume at this point) older brother is so full of symbols, it’s immediately apparent she’s the legendary MADMAX who dethroned Dustin on the local Arcade’s Dig Dug leaderboards.

Susan: Will doesn’t think this emo cabbage patch girl from sunny California could be the Dig Dug champion because “girls don’t play video games.” Hey, WATCH IT with the casual misogyny there Will, or maybe you deserve to get your Dorothy Hamill haircut wearing butt right back into the Upside Down.

Well, not really, that was kind of harsh. Guess I have to remember this is supposed to be 1984, and like Orwell mentioned Big Brother is watching. Regular visits to the “good doctor” (Paul Reiser) at the Hawkins lab to monitor Will’s progress seems no bueno to me. He’s part of the team that aren’t doing much more than stemming the tide of the Upside Down, and I think if they had a chance to sacrifice Will or any other child they would do it in a heartbeat.

Where There’s a Will

Peter: Will’s return to life, as it’s being framed by the conspiracy to keep wall-scab-portals out of public knowledge, seems to be the primary driver of this year’s titular strangeness. We were teased with this in the finale last season, when Will flickered between Upside Down and rightside up before spewing an evil slug into the sink. I was skeptical of having Will take on such a primary role, since he was only really in last season for about and hour tops, but again, those Duffer Brothers proved I have nothing to worry about.

Susan: It’s also such a sweet moment when Jonathan tells Will to “embrace” the freakiness. The bond between the brothers is such a strong force – will it be tested again???

Peter: There is so much to love about Will’s storyline this season. Narratively, the Zombie Boy serves as a window into the show’s dual mythologies. Through his waking visions, we are given glimpses of the Lovecraftian horror seemingly threatening Hawkins this Halloween, and through his treatment at Hawkins Labs, we get to see what the shadowy government organization is up to in a post-Doctor Brenner (aka Papa) world.

What I love most though, is how Stranger Things 2 is treating the topic of trauma. Will is clearly having actual visions of a monster-storm and a giant god-thing, but his distress is presenting as PTSD symptoms. As a viewer always on the lookout for positive representations of post-traumatic stress in TV, I swooned for Hop when he told Joyce, “That trauma stuff. It’s real.”

Susan: It’s nice to know Will isn’t be treated like he’s “crazy”, for a moment I thought they were taking him to shock treatment or something. 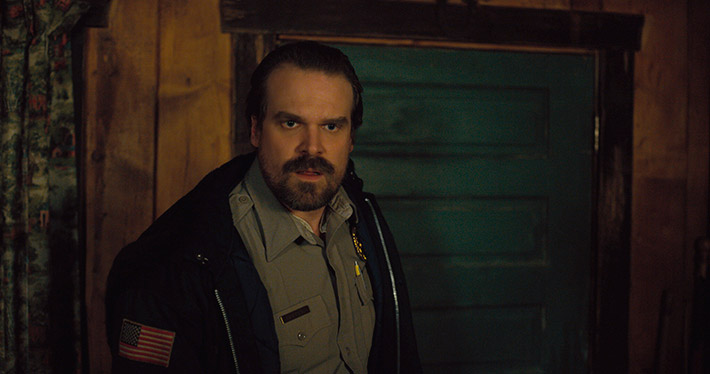 Peter: In a season premiere filled with surprises, I think maybe the one that shocked me most was the return of Eleven. I can’t believe she’s already back, and living with Hop, and she has hair. I was totally expecting to have to wait at least until next episode to get in touch with our favourite MK Ultra escapee. I have a feeling that she and Hop can learn a thing or two from each other, after-school special style.

Susan: But what exactly is he planning on doing with her? Keep her locked up his weird ass cabin all day and raise her on Eggos and TV? Hop better have a more long term plan.

Peter: I think, given the unresolved issues Hop has from losing his daughter to cancer, adopting a secret psychic daughter can only end in happiness for everyone involved. Right? Right?!

Susan: Super love Sean Astin as Joyce’s Dad bod boyfriend. Although his statement “I hate scary movies” makes me think BAD THINGS WILL HAPPEN TO THIS MAN. Speaking of Joyce, she seems to be doing really well, she’s looking better too. Also, Winona is doing a pretty good job at portraying a human woman.

Peter: As soon as Hop threw away his green apple after taking a bite, I had a feeling we were going to see a blighted crop. It’s almost like Hawkins’ charming small town veneer is hiding something sinister, like a government program that abuses kids and a fleshy portal to an unknown dimension.

Susan: Although I enjoy many of the 80’s throw backs, like Will’s favourite candy at Reese’s Pieces (E.T.), there are some things I have violent reactions to, such as WHAT THE FUCK IS MAX’S BROTHER? The jeans, fine, but the HAIR… the moustache… I just… it’s the grossest thing I’ve seen on this show, where you know, people vomit slugs.

Peter: The science man (Papa 2.0) may be up to no good, but he did raise a very important question: what’s your desert island candy? Mine is Coffee Crisp (controversial choice, I know).

Susan: Speaking of papas, did you catch the Doc call Hop “POP” during Will’s appointment? Did we miss something here? I’m going to guess that Hop is Will’s biological father, and there’s unresolved romantic tension between Joyce and the Police Chief. I mean, it’s already being set up with Hop calling her new BF “Bob the brain.”