Street Fighter V is an unusual paradox. On the one hand, video games don’t get much simpler. You punch and kick your opponent until one of you falls down and anyone can grasp the basic concept. The excellent fistfights can be as thrilling to watch as they are to play and the game can be an absolute blast when all the pieces are in motion. Street Fighter V is everything that fans of the series would want it to be.

And yet, Street Fighter V has to be one of the least accessible big-budget games in recent memory. Though the core premise is intuitive, the game engine that powers it is deceptively complex, and the surface presentation gives players little incentive to keep playing long enough to master the mechanics. Street Fighter handles as well as ever, but it’s lost touch with the aesthetic principles that made it a household brand in the first place. 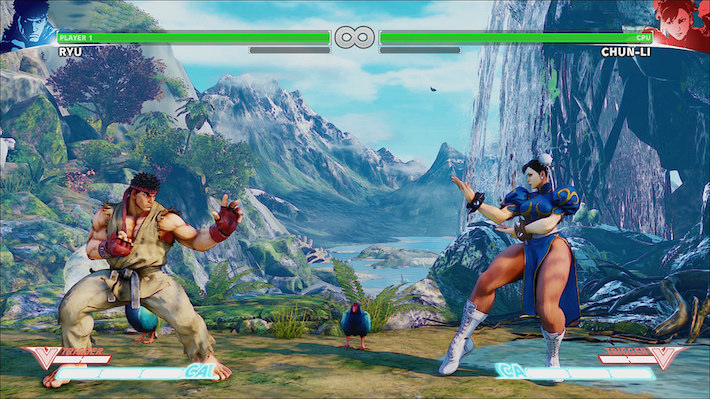 I feel relatively confident making that claim largely because I haven’t kept tabs on Street Fighter since it was in every household, and it’s jarring to jump back into the franchise with SFV.  I haven’t played more than a few rounds since the days of Street Fighter II, but I can still remember almost everything about that game, from the characters to the stages to the sound effects and the way the announcer said “U.S.S.R.” before your plane landed to fight Zangief. Street Fighter II is a classic not merely because it’s a groundbreaking arcade game, but because it boasts some of the most memorable iconography in the history of the medium.

Street Fighter V has none of that memetic charm. It coasts on brand recognition, counting on the fact that you already know Ryu and Chun-Li to avoid giving you any fresh reasons to care about Ryu and Chun-Li. That approach works for some of the characters (most notably Ryu and Chun-Li), but it’s less effective for newcomers like Rashid. These characters do not look like people. They’d barely be recognizable as cartoons. They’re animated like stick figures trapped inside water balloons and it turns the visual design into an incoherent mess when paired with cluttered backgrounds and random explosions of neon. If the look of Street Fighter II was iconic, then the look of SFV could best be described as a distraction.

It matters because it limits any of Capcom’s efforts to expand its audience. If you’re a new player, there’s nothing that grabs your attention. In that regard SFV is a lot like one of Michael Bay’s Transformers movies, an exercise in bombast with lots of pretty lights that looks fine in the moment and then passes from memory as soon as you’ve left the theatre because it’s all so jumbled, juvenile, and unfocused. Your brain wants to grasp at something epic, but inadvertently ends with a handful of crotch shots and gratuitous under boob that makes you feel kind of gross and fails to distinguish one character from another.

It also makes for a telling contrast with a game like Mortal Kombat, which makes a much stronger effort to appeal to the uninitiated. Features like the X-Ray attacks ensure that every player will see some cool shit as soon as they start playing, while the easy fatalities and the extensive story mode are products of a design philosophy that’s as committed to spectacle as it is to combat.

Street Fighter V is not nearly so welcoming. Every character has a completely different set of controls, to the point that being good with one does not in any way translate to success with another. If Mortal Kombat asks to be experienced, then Street Fighter V demands to be studied, in the sense that you have to spend hours practicing to reach a basic level of competency.

Unfortunately, SFV doesn’t do much to encourage that kind of studiousness. Though the game opens with a tutorial, it fails to explain many of the key concepts that you’ll need to succeed at SFV, most notably the two super meters that power most special moves (a friend and fellow critic had to explain both to me in person). Even if you do take the time to consult a move list, the icons are unintuitive and many of the techniques have names that do not in any way communicate what the move is supposed to accomplish.

All of which I to say that as a single player experience, Street Fighter is strictly worse than Mortal Kombat, which offers hours of content between the story and the challenge tower to help acclimatize new players. The story in SFV barely qualifies as a prologue for another, better story that is presumably being told somewhere else, while the Survival Mode offers no variation on the central format. There are about a dozen different menu options on the game’s title screen, but they all lead back to the exact same style of gameplay.

None of that is necessarily a problem. As I said at the beginning, Street Fighter V can be an absolute blast to play against an evenly matched opponent and I eventually started to feel comfortable with a few characters. The game’s design deficiencies do not in any way diminish its long term playability. They just make the game less accessible, demanding a higher up-front investment (likely against much better players) before everything starts to make sense.

That grind makes the game feel alienating, though it is possible that that could change in the future. Street Fighter V feels incomplete, as if many features are still missing at the time of launch, so I wouldn’t be surprised to see more beginner-friendly material added in later updates.

I just don’t have much faith in Capcom’s ability to deliver those kinds of educational tools. Everything about the design indicates that the game is geared towards players that are already familiar with the mechanics of Street Fighter. Its efforts to bring new players up to speed are woefully haphazard. I don’t see why those priorities would change moving forward. Street Fighter V expects you to have mastered Street Fighter V before playing Street Fighter V, and there’s not a whole lot to do if you’re not planning to make your way up the competitive ladder.

Unfortunately, there’s not enough of that absurdity to make it a genuine selling point. The story whiplashes from innocent quests of self-improvement to an international conspiracy involving a secret organization orchestrating genocide to a demonic being that literally consumes the souls of fallen warriors. Parts of it are fun, but it’s all too short and inconsistent, ending before it’s had a chance to amount to anything meaningful. 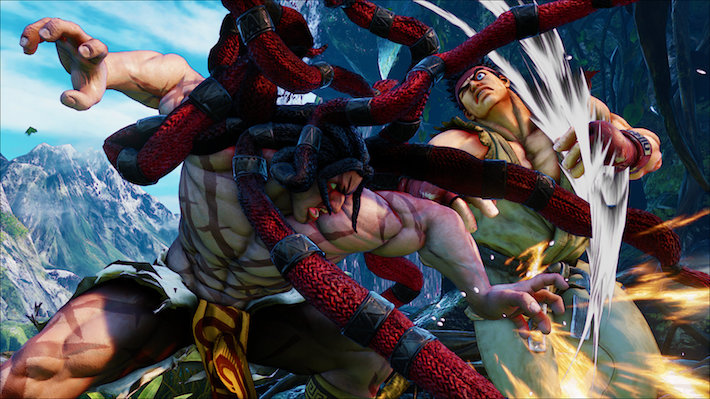 Street Fighter V is ultimately indifferent to everything not directly related to versus gameplay, failing to recognize how connective tissue makes the skeleton more attractive. Whereas recent installments of Mortal Kombat have been built around the idea that there’s something oxymoronically clean about a good fatality, Street Fighter V keeps adding noise that bears only a passing resemblance to its more streamlined source material.

If it seems like I’m focusing more on the wrapping than the present, it’s only because it’s too early to review many of the online features and I’m not qualified to comment on the more intricate nuances of the metagame. I don’t play too many fighting games and I most certainly can’t play Street Fighter at the level that it’s going to be played, though I fully recognize that the game is designed to appeal to a hardcore community. I suspect that Street Fighter V will satisfy those fans, but I can’t say for sure and other people will do a better job with that kind of analysis.

I can only comment on what I know, and in this case I know that Street Fighter V is not the Street Fighter I grew up with. The series used to have an all-audiences appeal that made Street Fighter II one of the most heavily played games of its era. Two decades later, it’s evolved into a series that seems to have little to no interest in (new) casual fans.

I still enjoyed Street Fighter V. It’s a great game to have for eSports and local multiplayer matches at a party. But it seems like it should be so much bigger given its pedigree and it’s definitely not the sort of thing that anyone can pick up and play, especially since most of the spectacle is hidden behind an overly complicated input and menu system. I just want to see something exciting, and it would have been nice to get a game that appreciated its casual fans as much as the professionals.

Next Article »
The X-Files Episode 5 Recap