Of all the months this summer, June has become so stacked that we had to divide our summer movie preview up into two parts! Today, we take a look at Madagascar 3: Europe’s Most Wanted, Magic Mike, That’s My Boy, Safety Not Guaranteed, Seeking a Friend for the End of the World, and G.I. Joe: Retaliation!

Madagascar 3: Europe’s Most Wanted (June 8th) – Just when you thought it was safe to go back to Africa… well, you would be right, since the critters from the last two animated Madagascar films are attempting flight from Africa to make it back home to their beloved New York City. En route they crash land in Europe and are forced to join a travelling circus to help them gain enough notoriety to make it back to the States.

With the entire principal voice cast from the previous two films returning and directed by three guys who also provide voices for the franchise’s beloved penguins and monkeys working from a screenplay co-written by no less than Noah Baumbach, Madagascar 3 looks to be one of the safest box office bets of the summer.

There’s something really endearing about these characters, especially the interplay between best friends Alex the Lion (Ben Stiller) and Marty the Zebra (Chris Rock) that made the first two films undeniably charming. This time around the cast gets new blood in the form of Bryan Cranston as a chronically surly Russian tiger, Martin Short as a high strung seal, Jessica Chastain as a sympathetic jaguar, and Frances McDormand as a hardnosed animal control officer who operates in a fashion similar to the Terminator.

I should say up front that I was lucky enough to catch about 15 minutes of rough footage from this one earlier in the year, and aside from the clips showing an abundant bubblegum pop soundtrack, the film seems to be following in the footsteps of its predecessors. And since I liked those movies just fine, I guess if it ain’t broke, then don’t fix it.

Safety Not Guaranteed (Limited, June 15th) – How often do we get to see a feature length film based on a hilarious internet meme? Almost never. And while we fear that Hollywood raiding 4Chan and Reddit for movie ideas may become an unfortunate trend going forward, Safety Not Guaranteed gets a free pass from this meme-loving asshole for being the first. The film’s wonderfully “out there” concept combined with an excellent comedic cast will likely make this one worth checking out.

Based on the popular YTMND meme of the same name, Safety Not Guaranteed follows three journalists  investigating a man who placed a classified ad seeking “someone to go back in time” with him. The ad warns any prospective time travellers that they must bring their own weapons and that their safety is not guaranteed. We’re glad that director Colin Trevorrow and his writing partner Derek Connolly saw this ridiculous meme and decided that this was a story that needed to be told. As long as Paul Engemann’s epic “Push It to the Limit” makes it into the film somewhere (preferably during a training montage of some kind), we will consider the film a success.

Led by a trio of TV stars – Parks and Recreation‘s Aubrey Plaza, The League‘s Mark Duplass, and New Girl‘s Jake Johnson – the indie time-travel comedy made a big splash at Sundance earlier this year. The film won rave reviews from numerous critics and was picked up by fast growing distributor FilmDistrict. Not bad for a first time director. We just hope that the always charming Duplass and ever cranky Plaza can convincingly play a paranoid weirdo and kind-hearted reporter, respectively. (Will Perkins) 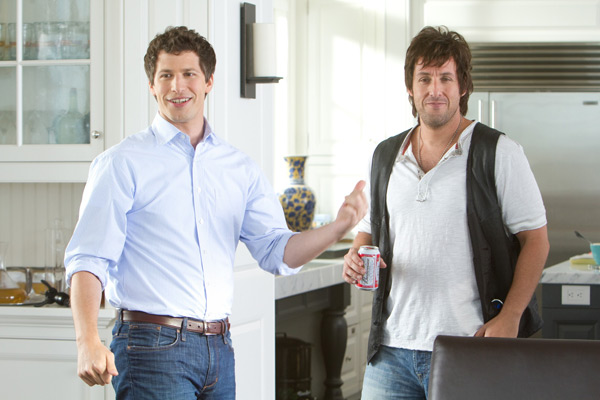 That’s My Boy (June 15th) – Last year after the one-two punch of the Adam Sandler co-written Bucky Larson: Born to be a Star and Jack and Jill, I admit that I wrote the former Billy Madison star off for good. Then I saw the first red-band trailer for That’s My Boy and I thought it looked kind of like the classic Adam Sandler films I used to be able to get behind when I was younger. This tale of a deadbeat (Sandler) trying to reconnect with his now wealthy estranged son (Andy Samberg) looked a lot like the potty mouthed rogue that I found unusually charismatic and funny.

I became even more intrigued when I looked at the writing and directing credits. Instead of going with his old guard cast of buddies and cronies (Dennis Dugan, Frank Coraci, Peter Segal), Sandler’s working with some fresh new blood. Director Sean Anders previously only directed the gleefully foul-mouthed and un-PC Sex Drive, and writer David Capse previously collaborated with Anders on the equally silly Hot Tub Time Machine. The cast of largely new faces to the Sandler universe also lends an air of renewal, headed by Samberg in what might be a bit of torch passing to the probably soon to be leaving SNL actor.

Add to that a reported uncredited re-write from David Wain and Ken Marino, and you can colour me a few different shades on intrigued to see how this all shakes out. Maybe I spoke too soon. Then again, even if this buys him some good will, it doesn’t change the fact that the next film on his docket is Grown Ups 2.

Seeking a Friend for the End of the World (June 22nd) – Finally a comedic remake of Don McKellar’s Can-classic Last Night! No, not really, but we can dream. Zombieland demonstrated that no matter how bleak the outlook apocalyptic comedies can work really well, and as anyone will tell you, nothing breaks up impending doom quite like the comedy stylings of Steve Carell, Patton Oswalt, Rob Corddry, and Gillian Jacobs.

Carell plays Dodge, a man whose wife leaves him on the eve of a world-ending asteroid collision. With nothing to lose Dodge sets out to find his high school sweetheart before time runs out, dragging his rightfully depressed neighbour, Penny (Keira Knightley) along for the ride. It’s not very hard to imagine what happens next. The pair will predictably fall for one another on their road trip and share a kiss just as the asteroid hits home. We know it’s the end of the world, but even then it’s pretty hard to buy Carell as Knightley’s love interest (he’s 23 years her senior). Still, what’s a little May-December romance when you won’t see another May or December?

Seeking a Friend for the End of the World represents the directorial debut of Nick and Norah’s Infinite Playlist scribe Lorene Scafaria. Depending on how you feel about Nick and Norah’s, this is either a very good thing for Seeking a Friend or reason to avoid it all together. As cliché as the film sounds on paper, consider us intrigued. Given Scarfaria’s previous work, we fear that the apoc-rom-com (that’s a genre now) could become a dreary and maudlin affair, but the comedy chops at play might just be enough to win us over. (Will Perkins) 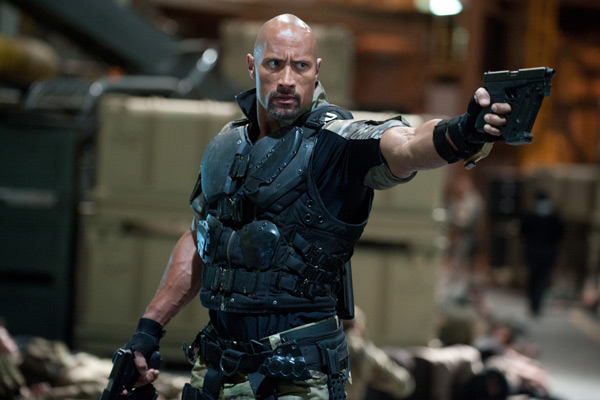 G.I. Joe: Retaliation (June 29th) – While not a fan of the first outing for the Joes, I’m unabashedly looking forward to this second entry in the toy themed franchise, which finds the Real American Heroes betrayed by their own country and nearly wiped out as Cobra plots the next step in their plans for total global domination.

Starring the go-to guy for sequel resurrection, Dwayne “The Rock” Johnson, Bruce Willis as the original Joe, and a returning Channing Tatum for at least five minutes (shame they couldn’t have brought back Joseph Gordon Levitt as Cobra Commander, though), Retaliation looks to trump the original in the starpower department, but also heartening is the arrival of director Jon M. Chu, whose previous credits include the last two Step Up films and Justin Bieber’s concert documentary.

Why do I think that’s a good thing, you might ask? Because those films cut out all the unnecessary fat that bogs down those types of films. Chu knows that if you are seeing a dance film, you are there for the dancing. If he applies that same principal to the G.I. Joe franchise, we’ll be all set. The film also boasts a script from the people who brought us Zombieland, which also knew how to include all the fun with absolutely minimum drag.

Magic Mike (June 29th) – My giddy level of excitement for the other movie with Channing Tatum opening on the 29th borders on almost being so unreasonable that no film could ever hope to match it.

But honestly, this is a film starring Channing Tatum based loosely on his own experiences as a male stripper and it’s directed by Steven Soderbergh. That one sentence alone sold me on the film, but it will be interesting to see if general audiences want to watch Tatum in a movie that hinges on so much sexual tension. Oh, who am I kidding? I’m sure they will and Tatum’s stock will probably only grow higher in an already stellar year for him. Haywire (his previous 2012 collaboration with Soderbergh, who should be approaching his self-imposed retirement clause any day now) brought him critical respect, The Vow (inexplicably one of the highest grossing films of the year thus far) brought him in touch with his female fanbase, and 21 Jump Street (understandably one of the highest grossing films of the year) showcased his ability for light comedy. Magic Mike looks to blend all three into a potent summertime confection.

Also, if I could give an award to the single best trailer for a film this year, Magic Mike wins hands down. If I’m in a rotten mood, I will just watch that trailer repeatedly. Yeah, I know, trailers can be misleading, but this looks like the visual equivalent of slamming tequila shots on a beach at four in the afternoon and then passing out before waking up ay 8 PM to go to the best job ever. If the film doesn’t turn out to meet my high expectations or the trailer has nothing to do with the film, the worst that could happen is that we get a Steven Soderbergh film, and those are always worth talking about no matter the quality.