Swiss Army Man is a movie that proves a fart joke can be melancholic, magical, inspiring, adventurous, and moving. That’s not necessarily the movie’s finest achievement, but it’s definitely a unique attribute worth noting. If debut features are supposed to be attention-grabbing efforts for filmmakers hoping to get their name out there, then Dan Kwan and Daniel Scheinert (collectively known as ‘The Daniels’) can certainly claim to achieved their goals. This darkly whimsical feature is unlike anything else you’ve seen except for those moments when it feels like almost everything you’ve seen before crammed together. It’s a strange little movie that plays by it’s own rules and has a tendency to mutate between tones and genres within a single scene. Some viewers will be elated, others will be appalled. No one will forget what they saw, whether they like it or not.

The strange beast of a film opens with a bearded Paul Dano stranded on a desert island about to hang himself and end it all. As the noose tightens and he prepares for the big leap, he notices none other than Daniel “Misssster Potter” Radcliffe wash ashore. That stops the suicide plans, even if the lonely Dano is disappointed to learn that Radcliffe is most certainly dead. Like all good corpses, the guy immediately starts farting and the flatulence proves so powerful that Dano is able to ride the body like a jetski to the mainland. That’s how the movie starts without exaggeration. So these Daniels fellows sure know how to set a scene and where they go from there hardly feels conventional.

As audacious as it would be to create an entire movie with Dano talking to a dead body and getting no response, the filmmakers make the wise choice of having that corpse start talking. So Radcliffe speaks, even though he has no memory of who he was in life or even how life works. That gets Dano chatting, explaining how the world works through his own sad n’ lonely experience. Turns out that Dano is playing a Paul Dano-type, a lonely lost soul so crippled by fears and insecurities that he never did much of anything. Making buddies with a corpse changes all that though and soon he’s sharing all of his meagre experiences through increasingly elaborate recreations that transforms all the junk he finds in the woods into a living stage. The body becomes an all purpose tool despite being immobile, spitting out items like a gun, chopping wood with his arm, and directing their way back to civilization with his boners (don’t ask). 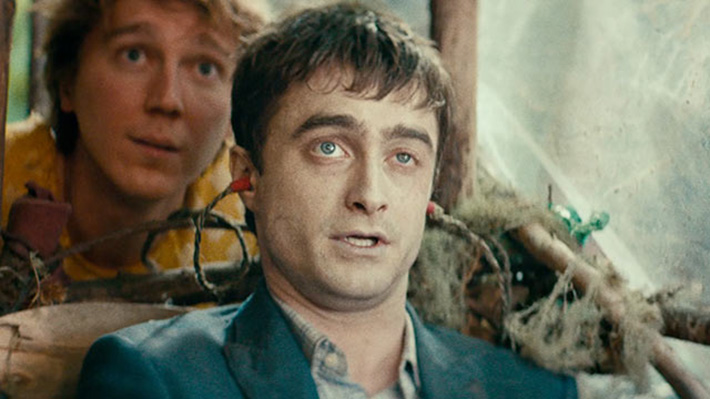 The tone is predominantly whimsical and goofy. The Daniels have a restless imagination and ADD approach to editing. Most sequences play out like a trailer for themselves, with images piling ontop of each other and montage being the go-to editing style. There’s a taste of Michel Gondry to the whole affair, with an overabundance of child-like visual imagination and plenty of seemingly handmade production design. The story slowly unfolds like a ‘lonely loser makes good’ indie, with Dano gradually learning to love himself and embrace life. There’s even a fantasy girl from the past (Mary Elizabeth Winstead) who he might finally learn to love. Thankfully, whenever that thread gets to icky in sentiment and whimsy, The Daniels divert into scatological humour and gentle body horror. They may have inspirational aspirations, but the filmmakers recognize they have a premise that’s also rather gross, dark, and slapstick in nature. All those tones mix together until the movie turns into something unpredictably different.

Now, as wild as the script and visuals provided by The Daniels might be, this is also two-hander tale dependent on its lead actors to survive. Thankfully the central duo (Who also have Dan in their name just like the directors. Coincidence?) don’t disappoint. Radcliffe has the most show off role, even though he can’t technically move. He gets to engage in stiff slaptstick (double, perhaps even triple meaning intended) and creates a bizarre buddy out of deadpan dialogue. It’s an odd, almost alien turn from the actor who has admirably aimed for eccentric acting opportunities since his big franchise wrapped up. As a result, it’s one of Radcliffe’s most memorable performances to date. Despite that fine work, Dano’s probably the best thing about the movie. To say he succeeds in carrying the weight of the film is an understatement. Dano is one of those actors who makes his job seem so easy that most people don’t even recognize how truly gifted he is. The guy is probably the best actor of his generation and while the fact that this likely isn’t his most complex performance is more of a comment on how great he’s been in the past than anything else. No one would have been better. Dano nails it (again).

Apparently there were a parade of walk outs when Swiss Army Man premiered at Sundance this year. Given how singularly and unapologetically weird this flick is, that makes sense. However, chances are many of the folks who left early may well have liked the film the most had they stuck around. You see, to truly appreciate Swiss Army Man, it has to be taken as a whole. For the bulk of the running time, this is like a whimsical, surreal, and inspiring twist on Weekend At Bernie’s. That’s all deliberate misdirection though and the true depth of what The Daniels delivered is saved for the end. Obviously revealing more would be unfair, but just be prepared for something that subverts expectations in a wonderfully moving and disturbing way. It’s safe to say that Swiss Army Man will be one of the strangest movies of 2016 and it may well end up being one of the best as well. Though a little excessive and over-the-top for it’s own good (even if that’s deliberate), the movie is quite the debut for The Daniels and it’ll be intriguing to see where they go from here. Even if the filmmakers never direct again, they’ll likely always be known as the men behind that farting corpse movie. That’s a legacy that won’t be forgotten by a certain sect of weirdoes and based purely only the film they made, it’s safe to say that these directors are in that club and are proud to be members. So that should work out A-OK.