Batman and Robin Archives - That Shelf Skip to main content 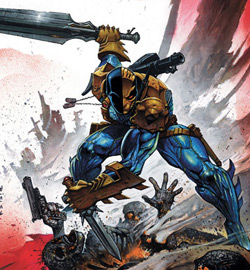 Spinning out of the events of Battle for the Cowl, is the debut of the new Dynamic Duo of Dick Grayson and Damien Wayne. I thoroughly enjoyed the new Batman and Robin series at first, but found my interest waning during the second story arc. I thought I was finished with the series after issue #13, until I saw the previews for the latest issue tucked at the end of all the major DC comics this week.
Special guests Peter Kuplowsky, programmer at the Bloor and the After Dark Film Festival, and Noah Taylor, blogger extraordinaire, join Jeff, Lucas, and Will for a discussion of recent films and comics. Peter lets us know what he saw at The Cannes Film Festival, and Jeff talks to us about Batman and Robin #1. "Here we go!"
Welcome back to this week’s pull list: what comics I’m looking forward to reading in the next week, and why I’m excited about them. Last week, I explained what pull lists are, and I hope since then some of you are now happy pull-listers in your own right. Batman and Robin #1 Spoiler Alert!  Dick […]