“The Mountain and the Viper” is about history. Some people dwell on the past and worry, others look back and find identity. One specifically unfortunate man has allowed his past to fester, making him prone to a mind-crushing lust for vengeance.

“Mockingbird” is all about unfunny jokes: lies that are told to make sense of chaos and control the actions of others. Game of Thrones is not a funny show, but this episode illustrates that it still has a use for humour. 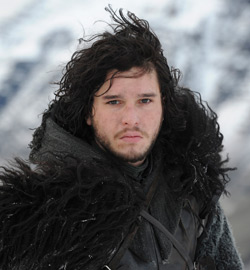 “The Laws of Gods and Men” sticks with the season’s contemplative pacing, taking inventory of its characters past deeds while demonstrating how much catharsis a well written and performed monologue can evoke.

Tween King Tommen Baratheon may be the "First of His Name" this week, but several characters show new sides of their personalities for the first time, and multiple throwbacks to Game of Thrones’ first season rear their heads with major implications for the future.

This week’s Game of Thrones has a lot to say about the promises we make (and break) in order to assert our identities. It also has a lot to show off in terms of how babies get made.

Douche Ranking "The Lion and The Rose." Where Game of Thrones characters are ranked on the patented (patent pending) Dork Shelf douche-awesome scale, wherein douchiness is measured in Joffreys and awesomeness is measured in mother$&#@ing dragons.
[View the story “Boo Hoo King Joffrey” on Storify]

“The Lion and the Rose” makes it through the treacherous woods of first act exposition - in the first half, no less - and then celebrates by throwing viewers a party that no one is going to forget anytime soon.

Quite a few characters on Game of Thrones tend to be well… douches. The wonderful thing about the show, however, is that you never know what end of the douche-awesome spectrum each character will end up on from week to week. Dork Shelf has decided to help you keep track of where George R. R. Martin’s imagination children stand each episode with our newest feature: Douche Ranking Game of Thrones!