Enter for a chance to win a pair of passes to an advance screening of American Hustle in Toronto on Wednesday, December 11th, courtesy of Dork Shelf and eOne Films!

With a director more accustomed to shooting good looking and well handled action sequences, The Hunger Games: Catching Fire is just a slight notch better than its predecessor, but nearly every other positive and negative from the first film remains exactly the same.

Enter for a chance to win a pair of passes to the red carpet premiere of The Hunger Games: Catching Fire in Toronto on Tuesday, November 19th or to an advance screening in Halifax, Ottawa, Winnipeg, Calgary, Edmonton, Victoria, or Vancouver on Wednesday, November 20th, courtesy of Dork Shelf and eOne Films.

Dork Shelf sits down with director David O. Russell, former sexiest man alive Bradley Cooper, and rising superstar Jennifer Lawrence about their work on Silver Linings Playbook and creating a film about mental illness that keeps it as real as humanly possible.

The good news about House at the End of the Street is that it’s not the aggressive swell of haunted house horror clichés that the trailers promised. Nope, this is actually somewhat of a traditional thriller that has more in common with a certain Hitchcock movie than it does with the latest direct-to-DVD genre rehash. Unfortunately, it’s not a very good thriller and the suspense/scares are doled out in such a dreary “slow burn” way that about as much time is spent developing a “battle of the bands” subplot as building up dread or atmosphere. 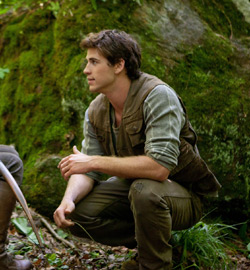 We talk to The Hunger Games' Liam Hemsworth about the building of his character over the next few films of a highly anticipated franchise, working with co-star Jennifer Lawrence, and his disdain for reality television.

Transcending its young adult novel source, The Hunger Games rises above its modest trappings to become a truly great film. Well, that’s not entirely true, but much like some of the film’s characters would say, it’s close enough to spin it into something.

Dork Shelf got a chance to talk to talk to The Hunger Games star Josh Hutcherson about the pressures of adapting such a beloved story, his working relationship with Jennifer Lawrence, and how to just be yourself in an interview.