Co-directed by Martin Scorsese, the documentary The 50 Year Argument delivers the rich history behind the fabled New York Times Review of Books.

Revenge of the Green Dragons Special Presentations It’s very easy to see why Martin Scorsese produced the latest film from Andrew Lau. Not only did Lau create the successful Infernal Affairs franchise that would allow Marty to make The Departed, but this decade spanning and thoroughly brutish crime saga (a collaboration with co-director Andrew Loo) […] 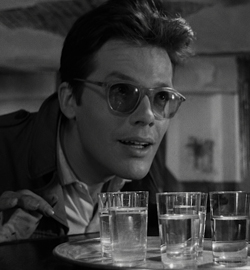 Acclaimed filmmaker Martin Scorsese has put together a series of 21 masterpieces of modern Polish cinema that starts at the TIFF Bell Lightbox this week and here are some key selections.

Enter for a chance to win a copy of Martin Scorsese's The King of Comedy on Blu-Ray, courtesy of Dork Shelf and 20th Century Fox Home Entertainment.

Enter for a chance to win a pair of passes to an advance screening of The Wolf of Wall Street on Thursday, December 19th in Toronto, Ottawa, or Montreal, courtesy of Dork Shelf and Paramount Pictures.

As one might guess One Direction: This Is Us (from already noted sell-out documentarian Morgan Spurlock) is more of a commercial for the band's success aimed squarely at fans who will never once admit their dreamboats are manufactured. That's fine. As is the manufacture music. Those 3D musical numbers, though, still aren't any interesting thanks to a clear and distinct lack of stage presence.

Wake in Fright is a strange little Australian nightmare that was almost lost to obscurity. It’s not always an easy film to watch, particularly for animal lovers, but it is a dark, twisted, and unforgettable experience for those who have a taste for such things.