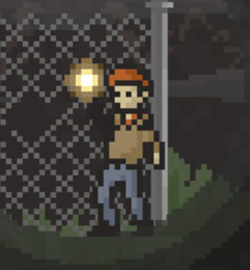 If you’ve been to any events run by Toronto’s Hand Eye Society, chances are you’ve seen Miguel Sternberg hard at work, frantically synching computers into local networks and test-driving new games built by himself and his colleagues. He’s half of the two-man team known as Spooky Squid Games.