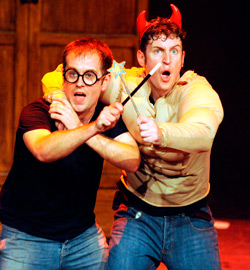 Much like similar attempts to reduce the complete works of Shakespeare into a single scant theatrical running time, the unauthorized J.K. Rowling reduction Potted Potter (now on stage until March 25th at the Panasonic Theatre in Toronto after successful runs in the UK) has the feeling of a madcap romp boiled down to a science. This cramming of all seven Harry Potter books into a 70 minute production definitely skews slightly towards a younger crowd, but the fan appeal is undeniable and the uninitiated will have a hard time erasing the ear to ear grin from their faces.