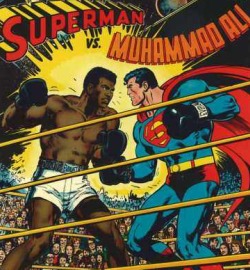 Poor Supes has been forced into meeting after ridiculous meeting with some of the weirdest folks you can possibly imagine. Here’s our list of the strangest Superman crossover moments in comic history.

Just in time for March Break, the TIFF Bell Lightbox has arranged a selection of superheroes and comic book saviours for your viewing pleasure.

Andrew Ivimey realizes that the only thing that stopped him from becoming a caped comic book crimefighter was having a living family.

All-Star Superman is DC's newest animated feature and drops today on Blu-ray and DVD; it follows the storyline set out by the comic book of the same name. Released between November 2005 to October 2008, All-Star Superman gave us the quintessential Superman story - there were elements from every part of his mythos, and it was all tied together by one overarching plot point: Superman is dying, and needs to come to terms with his mortality.
WB Games and Sony Online Entertainment used San Diego Comic Con as a chance to show off the new trailer for their upcoming massively multiplayer roleplaying game DC Universe Online. The trailer shows an alternate DC Comics universe, where Lex Luthor finally succeeds in killing Superman. However, Luthor quickly discovers that his victory is a […]
Deadline Hollywood is reporting that miracle-working director Christoper Nolan (The Dark Knight, Inception) is set to take a “godfather” role for pre-production work on the upcoming Superman reboot. Talks about bringing the Man of Steel back on the big screen have ramped up recently, with the news about Nolan just coming today. Warner Bros. plans to […]
New formats, new stories, and the worst kept secret in comics. The Return of Bruce Wayne At the end of Final Crisis, Bruce Wayne was believed dead. Well…  not so much dead as trapped back in time. The DC heroes all think Bruce Wayne is dead, except for Red Robin aka Tim Drake, but he […]
EcoComics is a hilarious blog that applies real world economic and political science theories to the universes of Marvel and DC Comics.  The site discusses what the economic realities of a world full of superheroes and villains would be.  Among the topics discussed are how the recession is affecting comic book characters and the propensity […]