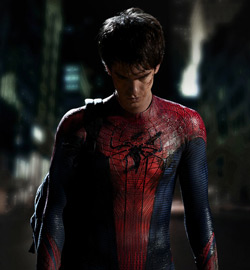 Although we've had an idea of what the Spider-Man film costume was going to look like for awhile now, we finally get an official picture of the ol' red-and-blue tights. Along with it comes the announcement of the film's title: it will be officially referred to as The Amazing Spider-Man in all future news posts.