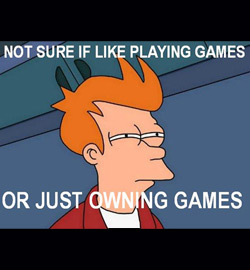 Barely a week has passed and I don’t even remember all the games I just bought. The Steam Summer Sale, the digital download service's most momentous sale where PC games are discounted to massive, nay, ridiculous margins, has come and gone, and gamers could neither contain their excitement nor their wallets. As my email inbox floods with successive “Thank you for your purchase” messages, it becomes increasingly clear that this shit is getting ridiculous.
Jeff, the thief, Will, the knight, and Lucas, the wizard, take a break from stacking boxes and dissolving in acid to talk about what they've been playing and what the new year may bring. Lucas details his least favourite Genghis Khan biopic. Jeff talks about what DC has planned for next year, what looks promising. Oh, and Will saw Avatar. Hike up those pants, listen in, and continue the discussion in the comments.
Valve Software just can’t seem to keep the lid on these things!  The intro cinematic for Left 4 Dead 2 has leaked on to… *gasp* …the internet. The game is the sequel to Valve’s extremely popular co-op zombie shooter Left 4 Dead. I think it’s a sneaky way to get publicity, but it works right?  […]
We’re big fans of Valve’s Left 4 Dead here at Dork Shelf.  YouTube user monkeyjunkie (one of the responsible for the Half-Life remake Black Mesa) put together a little machinima based on L4D set to the timeless music of Louis Armstrong.  Do yourself a favour and watch the HD version. Also, make sure to check […]
The Electronic Entertainment Expo—E3 kicked off with a bang in Los Angeles today.  Microsoft got the ball rolling with their press conference this morning, and they did not disappoint.  There were major game and peripheral announcements aplenty, as well as first looks and gameplay demonstrations for many sequels.  Check out all the highlights after the […]
What are you doing this weekend?  If you don’t already own The Orange Box you’re going to be downloading and playing it—you no longer have any excuses.  Valve Software‘s online game distribution service Steam has priced The Orange Box listed at $9.99 for this weekend only. That’s right, you can own Half-Life 2, Half-Life 2: […]
It’s amazing what you can pack into 4096 bytes.  Java4k.com, a site dedicated to the creation and distribution of 4kb Java games, and has compiled a list of the top microscopic games of the year.  Among the best are 4k versions of classics like Asteroids, Brickbreaker, Tower Defense and Mega Man. A standout for me […]